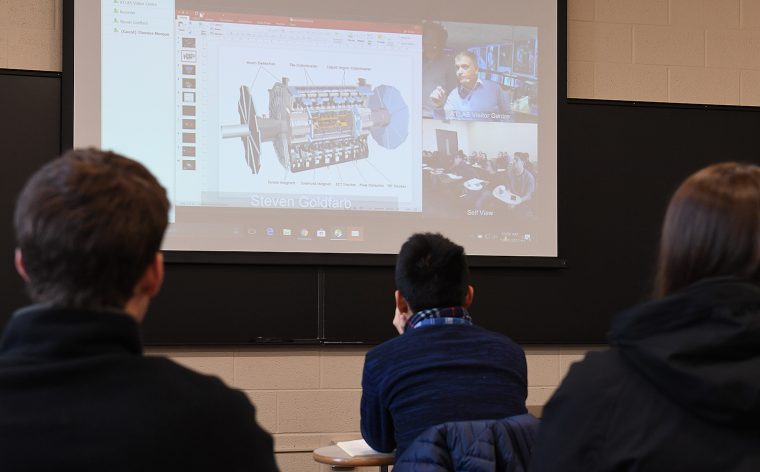 On Dec. 11, Foss Professor of Physics Tom Morgan invited his class, Introduction to Contemporary Physics, to join him in Exley Science Center for a virtual visit to the Large Hadron Collider, the world’s largest and most powerful particle accelerator, located in Geneva. With Senior Instructional Media Specialist Heric Flores-Rueda projecting images on a classroom screen through video conferencing, Morgan’s students enjoyed a real-time view of the CERN (European Organization for Nuclear Research) laboratory and an on-screen peek inside the collider. Physicist Steven Goldfarb—a member of the team that discovered the Higgs Boson Particle—led the tour, explaining the experiments underway, as well as offering a question/answer period.

This course, a sophomore-level gateway to the physics major, is new to the department in this format, said Morgan, and slated to become part of the curriculum, due to its popularity. This semester five seniors, six juniors, six sophomores, and what Morgan calls “one lucky first-year student”—admitted after an interview—make up the class.

“The material we study is a mixture of special relativity and contemporary ideas, such as what’s going on at the Hadron Collider, and what’s happening with the gravitational waves, neutrinos, and so many other topics,” Morgan explains. “I’m always delighted when I have a class that’s as receptive as this group is—and I think the material draws them in; it’s very engaging.”

From the laboratory in Geneva, on-screen at Wesleyan, Goldfarb spoke of concepts that Morgan covers in class. “The accelerator needs to be this large because we’re taking energy and producing particles of a higher mass. It’s Einstein’s formula—E=MC2,” he explained at one point, and the students took notes at particular junctures of interest. Goldfarb also invited all members of the class to apply for a summer internship at CERN. (“I’m sure some of the students will be coming to me and wanting recommendations,” noted Morgan. “I’m really happy about that.”)

The closing question-and-answer period provided their professor an opportunity to see where the students’ curiosity was taking them—and even included a question that Goldfarb noted he’d never received: “What if you had a couple of dust particles floating around in your machine?” to which Goldfarb responded with a detailed account of how the collider is cleaned. (“That was a good question for them,” noted Morgan.)

Later, discussing the course, Morgan explained why the work of the collider was very much in focus for physicists and particularly appropriate to consider in this course. “We don’t actually study dark matter and dark energy, because physicists don’t know what they are,” he explained. “We study the evidence for them, and we study the models proposed.

“But to date, physicists haven’t found a confirmation of their existence. And the issue is getting a little disconcerting for those in the field.

“The experimentalist’s job is to find out which model is the right one by going to the Large Hadron Collider and doing experiments within a certain energy range. And if they don’t find dark matter there, that negates several theories, and they continue exploring others.”

The Hadron Collider, he said, is now very close to eliminating all current theories, which he calls “a new crisis for physics,” and a possibility that he considers with some relish.

“Eliminating all theories is more exciting than confirming one—that’s the way physicists think. To confirm a theory is just run-of-the-mill; okay, well done.

“But to take all theories off the table and say, ‘You have to start over again,’ that’s a major accomplishment—and that’s where the Hadron Collider is bringing us.”

Additional photos of the video-conference are below: (Photos by Cynthia Rockwell)