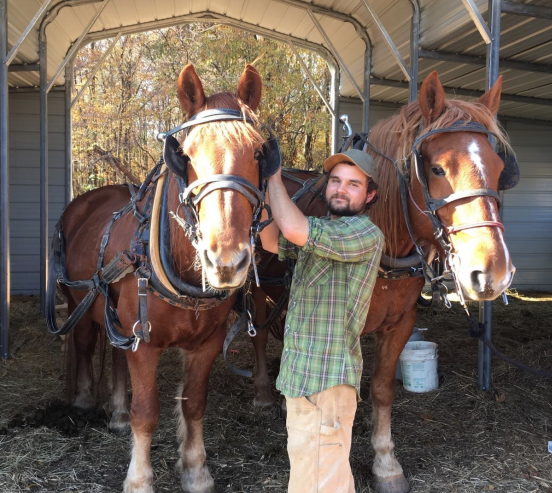 According to the recently published 2017 Long Lane Farm annual report, almost 100 Wesleyan alumni are working in agricultural production industries. Many of these alumni got their start working at Long Lane Farm, Wesleyan’s student-run organic farm devoted to allowing students a place to experiment and learn about sustainable agriculture.

Daniel Mays ’06
Mays studied math and physics at Wesleyan where he helped out in the early days of Long Lane. Since then, he has taught at a boarding high school, bicycled through Mexico, earned a graduate degree in environmental engineering, and worked on a number of farms. In 2010 he started and currently owns and operates Frith Farm in Scarborough, Maine. The farm encompasses 14 acres and offers organic vegetables, pasture-raised eggs, chicken, lamb, pork, and turkeys. Frith Farm employs no-till vegetable production methods.

Mays believes farmers should be stewards of the land, not miners of its resources, and that farms should be hubs of the community, not distant sources of its calories. He also believes that economic sustainability need not be sacrificed, but rather can come directly from the union of environmental stewardship and community involvement.

Jordan Schmidt ’08
After graduating, Schmidt worked on a few different vegetable farms and then spent several years organizing the field work at Hearty Roots Community Farm in the Hudson Valley. In 2013,  she helped her partner take over management of her family’s dairy farm, Chaseholm Farm, in Pine Plains, N.Y., which she has been transitioning over to 100 percent grass-fed cows. Schmidt also grows several acres of culinary and medicinal herbs on that same property and runs Remedy Farm. In addition to being a farmer, Schmidt is a nutritional therapy practitioner, associate instructor for the Nutritional Therapy Association, and a movement teacher. She has spent a decade working with organic farm systems and is fascinated by the connections between the health of our broader environment and the health of our internal bodies. Read more about Schmidt in her Remedy Farm profile.

Rachel Lindsay ’05
Lindsay was a co-founder of Long Lane Farm and the first summer manager. She worked at several CSA farms in Massachusetts and in 2009 was awarded a Fulbright to work with farmers in Nicaragua. She is the current communications and sustainability director for Social Business Network, a nonprofit that works with fair-trade agricultural cooperatives. Her current project is helping to design a new sustainable agriculture training center in Rwanda. “Long Lane was the beating heart and soul of my Wesleyan world,” she said.

Akers-Campbell, who started the farm less than two years ago, raises produce, pork, chicken and eggs for local markets in Norwood and Charlotte, about 50 miles away. “Many of the skills I learned at Wesleyan and Long Lane have been useful for me, particularly on the business, marketing, and community aspects of the farm,” he said. “I’ve had to draw upon a wide variety of skill sets and push my boundaries already in starting this farm. I’m thankful for my experiences apprenticing on other commercial farms where I learned to farm with horses and on the scale, I’ll be operating at here, but Long Lane is largely to thank for giving me the confidence to make management decisions on the farm and interact with the community.”

After graduating from Wesleyan, Sowden apprenticed on Cate Hill Orchard, a small organic apple orchard and sheep dairy in the Northeast Kingdom of Vermont. Following the apprenticeship, Sowden started work at High Mowing Organic Seeds, which focuses on growing and selling high-quality seeds adapted to the New England climate. “I knew almost nothing about sustainable agriculture before Long Lane and am so grateful that I was happily swept up into that world during my time at Wesleyan,” Sowden said. “There is so much exciting work being done now in the field of sustainable agriculture, food justice, education, etc. and I don’t think I would have found my way into this work without Long Lane.”

Daley, who’s learning about managing a farm enterprise and working with draft animals, began working at Long Lane Farm during his first semester at Wesleyan. He’s also worked as an apprentice at diversified CSA vegetable/livestock farms in Tennessee and in Maine. “Long Lane has been a source of endless inspiration for me, and I am grateful for everything I have learned there. I knew next to nothing about sustainable agriculture before coming to Wesleyan, and the experience of collaborating with others to run a small farm has been invaluable. I hope Long Lane continues to inspire many others in the years to come,” he said.

Sarah Tracy-Wanck ’10
Tracy-Wanck currently manages the Common Ground High School’s Environmental Leadership Program in New Haven, Conn. She works with teachers to develop and facilitate project-based work into the curriculum, incorporating real-world content from the school’s farm. She co-facilitates a number of farm-based programs after school, including a student-run Environmental Ventures and Farmtastics. She also oversees the School Garden Resource Crew, which builds and maintains gardens in public schools in New Haven.

Adan Martinez ’05
Martinez apprenticed at—and later managed farms—for eight years in Connecticut, Massachusetts, and Vermont, growing mixed vegetables and raising animals for direct and wholesale markets. After graduating from Yale Law School, Martinez took a job as a litigation fellow for Sanford Heisler Sharp, LLC in New York. His legal work aims to change the underlying legal and cultural conditions that cause dysfunction in the food system. “Long Lane Farm was the birthplace of this work,” he said.

Tess Parker ’10
Since graduating in 2010, Parker started a farm called Common Hands Farm. The biodynamic farm spans 150 acres in Philmont, N.Y. “Our farm community supports itself through a CSA (community supported agriculture) and our main focus is on growing many annual and some perennial vegetables and herbs for 300 or more customers on a weekly basis,” Parker said. “Our farm is a great opportunity to learn many aspects of how small organic farms and local food systems work. We work hard and feel proud of the abundance we create within and for our community.” Farmers at Common Hands Farm grow more than 100 different varieties of produce throughout the season, and volunteers have the opportunity to learn how to grow, harvest, and prepare produce with chefs and producers in a local farmer cooperative kitchen and market.

Dayna Locitzer ’09
After graduating, Locitzer completed a couple of different farm apprenticeships, one on a small vegetable farm where they also had livestock and another on a biodynamic dairy farm called Hawthorne Valley Farm in Ghent, N.Y. “I apprenticed there for three years and learned everything from how to milk a cow to growing grain crops for animal and human consumption to making organic compost,” she said. While working at Hawthorne Valley, she helped another small conventional dairy farm transition to organic. Through this experience, Locitzer learned that she wanted to become a veterinarian who provides services to dairy farmers. She’s currently in veterinary school.

Sophie Ackoff ’11
While she was a student, Ackoff worked with Long Lane Farm and Bon Appetit to bring locally produced food to campus and has since worked with Food & Water Watch and apprenticed at Glynwood Farm in Cold Spring, N.Y. She is currently a national field director for the National Young Farmers Coalition. In this role, Ackoff helps farmers across the country launch and grow NYFC chapters. She leads the coalition’s grassroots campaign work and manages its corporate partnership and membership program.

Charlotte Heyrman ’13
After graduating from Wesleyan, Heyrman lived on a large CSA farm in Charlottesville, Va., where she drove a tractor, helped manage the budget, and worked in the field six days a week. She then worked at Good Eggs, an online farmers market based in New York City, where she helped young farmers from the Hudson Valley sell their food to residents in Brooklyn. She currently provides legal services for low-income veterans but continues to volunteer at an urban garden in her neighborhood. “My window boxes are well tended,” she said. “I miss [farming] a lot and hope that I can get back to growing food more seriously in the future.”

Josh Krugman ’14
Krugman worked on Long Lane Farm throughout his time at Wesleyan. He now works at the Bread and Puppet Theater in Glover, Vt. on an old dairy farm. The theater company lives in an old farmhouse and performs in neighboring barns and fields. They spend summers on the farm, creating new shows with apprentices and volunteers, and then tour the country and the world the rest of the year. The farm’s two gardens produce all the salad greens, cooking greens, peas, cucumbers, radishes, beans, and other fresh vegetables the community consumes in the summer, as well as other produce to store and freeze for the rest of the year. “We employ a gardener or two every season who is in charge of the garden (but who nonetheless gets drafted into performances now and again), and we all contribute our labor to the gardens,” Krugman explained. “Our theater is a poor theater, a peasant theater, committed to an ethics, politics, and economy that is in a living relationship with the land.”

Jaxie Friedman ’15
Friedman has been working as an educator at Stone Barns Center for Food and Agriculture in Pocantico Hills, N.Y., since graduating from Wesleyan. Stone Barns is a not-for-profit organization that aims to improve today’s broken food system by changing the way America eats and farms. “As an educator at Stone Barns, I am involved in a lot of public and educational programming in which I teach kids and adults about techniques of sustainable agriculture, the importance of local and seasonal food consumption, and why we should care where our food comes from and how it is grown,” Friedman explained.

Laura Cohen ’14
After leaving Wesleyan, Cohen took an apprenticeship at the 140-acre Green String Farm in California. She then moved to southern Vermont and joined Earth Sky Time Community Farm, a small family-run organic farm and bakery. From there, her interests took her to the warmth and sunshine of Solitude Farm Café in India’s southern state, Tamil Nadu, where she worked alongside a crew of Tamil farmers and a rotating cast of international volunteers to put the no-till teachings of Japanese farmer Masanobu Fukuoka into practice alongside traditional Tamil methods. “Harvest time was a scavenger hunt in a jungle of banana trees, tapioca, eggplants, lettuces, peppers, cherry tomatoes, and papaya trees, and rice and dal grew amid a sea of weeds,” she recalled. After that was a short stint with White Pine Community Farm in Wingdale, N.Y., wild-crafting, growing, and sending medicinal herbs and vegetables to incarcerated people in New York state, before landing at Ananda Ashram in Monroe, N.Y., where she continues to work with the land, harvesting wild herbs from the forest and helping to rejuvenate an old garden and to cultivate a new one. She teaches yoga classes, combining Hatha Yoga, Vinyasa, pranayama and Sanskrit chanting.