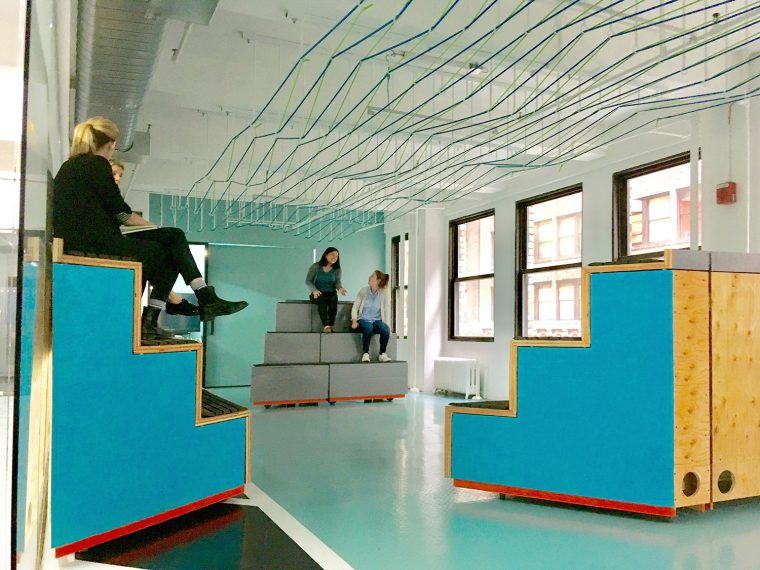 There’s a certain sense of effortlessness that Alex Levi ’90 remembers from his rowing days at Wesleyan—that feeling of being perfectly in sync and in so doing achieving something better and greater than any individual effort could reach alone.

That feeling came back to inspire Levi in a recent project, designing a collective office space that serves as the administrative hub for four sports-based youth development (SBYD) nonprofits in New York City.

The 10,000-square-foot open workspace in the middle of Manhattan’s Garment District is home to the offices of VitaSports Partners, the collective umbrella under which Row New York (rowing), Play Rugby (rugby), I Challenge Myself (cycling and fitness), and Beat the Streets (wrestling) come together to share administrative resources and a common mission expressed in their tagline: Elevating humanity through sports.

Levi and his design partner and spouse, Amanda Schachter, were tasked with creating a practical space that could appropriately serve the needs of all four groups while also evoking a sense of fun, light, and airiness so that the groups didn’t feel crowded—all within the constraints of a typically anemic nonprofit budget. It was a challenge perfectly suited to Levi’s unique architectural process and his commitment to social outreach, sustainability, and meaningful design.

“When we design something for a client, it’s sometimes one of the most important moments in that person or institution’s life,” he explains. “We try to slow it down enough to embody the spirit of that ambition, to make something beautiful that will last them as long as they need it rather than taking a fast cookie-cutter approach or making it the answer to a formula about market or profit.”

Levi traces the seeds of this interdisciplinary people-centered approach to his years as a visual arts major at Wesleyan, when he volunteered three or four times a week teaching painting and visual arts to prisoners in Hartford’s Morgan Street Jail.

“It was the beginning of my understanding of how social engagement could be tied to design,” he said. “Visual arts externalize and concretize observation. They are perfectly tailored toward the idea of collaboration and observation that you need when trying to slowly build a bond and understand the world better.”

The concept was further developed after Levi and Schachter graduated from architecture school and began teaching and practicing in Spain, where they experimented with bringing unexpected groups of people together to collaborate on a common project—in one case having kids in foster care, immigrants learning Spanish, and architectural students from around the world building a model of Barcelona together.

“We found the best design was made over longer periods of time when you opened up to people who had entirely different points of view and entirely different life experiences than you,” Levi recalled. “This kind of long, slow burn creates bonds that don’t break even after the project has ended.”

Bringing the Movement to the States

When Levi and Schachter brought this idea back with them to the States in 2007, they found that there were analogous “slow architecture” movements cropping up around the country, and they created their own version of it in New York. They opened up SLO Architecture (a play on “Schachter Levi Office”) and have been taking on a variety of projects—art installations, service projects, ex situ preservation pieces, conventional commissions—ever since.

With an extremely tight budget, they were challenged to think innovatively, designing pieces with multiple functions and creating efficiencies in shared desk spaces and fun “phone booth”-type quiet conversation areas separated from the general workspace. Tire treads on the lounge bleachers provide cushioning and evoke movement. Multicolored resistance training bands crisscross the ceiling, echoing the core strength (physical and intellectual) that the underserved youth in the program learn to develop. Translucent partitions “float” from the ceiling, delineating different work areas while also mimicking the flying sensation of rowing across the water—a nod to Levi’s Wesleyan crew days and a metaphor for the exhilaration and harmony that comes from working together as a team.

Assembling specially designed pieces became another opportunity to not only save money, but to also strengthen the bonds among the groups within the collective. Levi and Schachter organized a series of “painting weekends” bringing together group volunteers, fans, the kids in the programs, coaches, and alumni to help with putting the space together.

“That was part of the design—to get together, to design the excuse to get together,” says Levi. “Making every occasion in the design process social and meaningful for the people you are working with creates a strong bond with your clients. You become part of a network of kindred spirits who have a mutual understanding about this mission. You’re not just providing a mere service; you’re teaming up with someone in the long run to make the world better.”