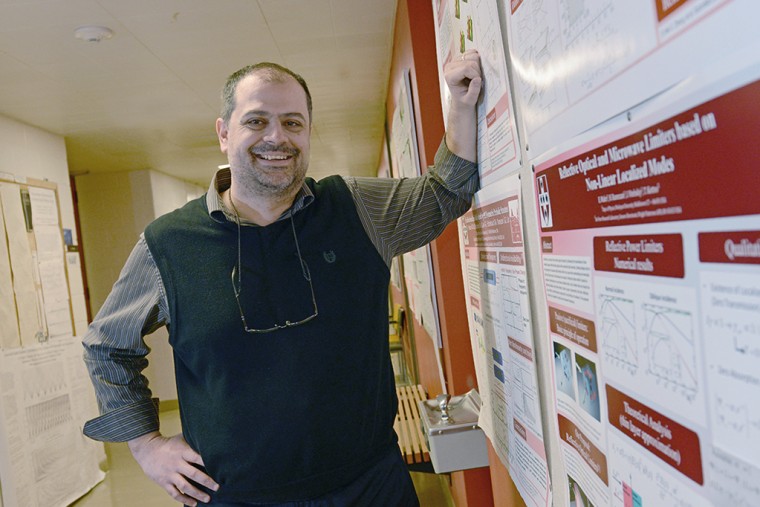 Tsampikos Kottos, professor of physics, and Wesleyan University will lead a complex, multi-institution initiative to research and develop the next generation of national instrumentation technology thanks to a four-year, $2,794,606 grant from the Defense Advanced Research Projects Agency (DARPA).

Awarded this August, the grant is the culmination of at least eight years of photonics research by Kottos and his fellow collaborators, and will have significant implications for the future of a variety of technologies employed by the federal government and the private sector. An agency of the U.S. Department of Defense, DARPA funds research and development projects that push the boundaries of technology and science. The focus of Kottos’s project is to “develop models and photonic devices that utilize dynamical (hidden) symmetries in order to achieve extreme light-matter interactions” and has three main targets:

“I believe this is one of the few times that a liberal arts college has led this kind of effort,” Kottos said. “That was one of the main reasons I agreed to it. I was tired of hearing that small universities couldn’t do certain things. And one of the best parts about working with [DARPA] is they prioritize strong ideas and execution.”

The project also involves four other collaborating institutions serving as subcontractors: the University of Texas at San Antonio as experimentalists, the University of Arkansas as fabricators, Washington University in St. Louis for device testing, and the University of Central Florida for device characterization and design. Their proposal was selected from a competitive pool of international applicants that included hundreds of teams and national labs like NASA and well-known private sector companies. Another notable feature of the project is the key role Wesleyan students have and will continue to play in the research.

“Most of the scholarship that we generate has been thanks to the efforts of Wesleyan graduate and undergraduate students,” Kottos said. “A $3 million grant has a monetary value, but you can’t put a price on training undergraduate students leading the next generation of national technologies. What we’re offering here at Wesleyan is above and beyond what other institutions are offering. We not only teach them the material of various courses. This is easy! Rather, we train them on how to synthesize acquired knowledge in order to address real-life problems. More importantly, we train them on having a healthy working culture, and on how to be critical of their own results (and the results of others for that matter). The process is very demanding, but we’re operating with the ethos that our undergraduate students are interested in and are capable of doing this work.”

Kottos admits that the size of his team and the project’s scientific and administrative complexity pose significant challenges, and he was quick to credit Wesleyan’s staff accountant for grants administration, Rose Pandolfo, for navigating the rigors of the application and funding process.

“We couldn’t have done this without her,” Kottos said. “It was a learning experience for all of us. There are so many small components that are all critical—subcontracting, reporting—very complex things. If you want to lead a national effort, you have to be prepared for these challenges.”

Because DARPA is focused on deliverables, the project will be monitored closely and will require Kottos’s team to go well beyond prototyping into actual functioning technology. This also entails a rigorous oversight process in which the team will report in to a DARPA advisor every six weeks and give hour-long presentations every three months, as compared to most other DOD grants, which require only annual reporting.

“Science in our day is moving so fast that what was new yesterday is old today,” Kottos said. “It is a meritocracy and (apart from good ideas) being competitive requires focus, hard work, and sacrifices. The excitement around that, the desire to be the first, and the opportunity to contribute to the technology that future generations will use, is what keeps us in this business.”