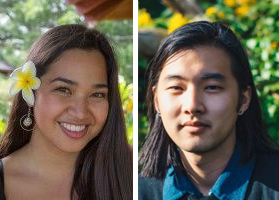 Momi Afelin ’19 and Justin Kim ’19 are among 41 students from 40 partner institutions across the country to receive the prestigious fellowship. The Watson Fellowship is a rare window after college and pre-career for students to engage their deepest interests on a global scale. Fellows conceive original projects, execute them outside of the United States, and gain personal insight, perspective, and confidence.

Afelin, a biology and neuroscience and behavior double major, will spend her fellowship year working on a project titled “Island Innovation: Embodiment through Social Entrepreneurship and Innovation.” She will embed herself in five island countries in the Pacific and Caribbean including Samoa, the Solomon Islands, Fiji, Jamaica, and Trinidad and Tobago and observe how geographic isolation and unique social structures of island communities demand innovation for survival and success.

Her curiosity in island innovation comes from growing up in Molokai, Hawaii.

“To grow up on an island is to grow up a problem solver,” she said. “I would like to explore how other islanders like myself are harnessing their innovation through social entrepreneurship or social innovation endeavors that address community issues.”

“Islands are separated by large bodies of water, which create an entirely different challenge in receiving resources [and] isolated communities face socioeconomic burdens in different or more extreme ways than more populous areas,” Afelin wrote in her fellowship project proposal. “The Watson Fellowship will provide me with the opportunity to observe and engage with island communities and build on my own personal experiences and my Wesleyan education to see innovative island people in action grappling with their own community problems.”

Kim, an American studies and film studies double-major, will explore “Koreatowns” through his project titled “Identity, Erasure, and Belonging in Korean Diasporas.” He will investigate vanishing narratives within the Korean diasporic community in Argentina, Mexico, the Canary Islands, and Uzbekistan.

“Through interviews and participant observation, my goal is to get as close as possible to the community organizations and constituents of each town,” Kim said. “I will supplement these experiences by meeting with related stakeholders including government officials, artists, religious leaders, and other enclaves that inform these distinct communities.”

Kim’s project grew from his personal experience being a Korean American immigrant and a recent encounter with USCIS (U.S.Citizenship and Immigration Services), which raised his awareness of several obscure and tragic turns in the Korean diaspora. He cites the 1930s forced deportation of Koreans from Russia to Central Asia as a result of the Communist Party’s ethnic cleansing programs as one such example.

“As such, this project is driven by a sense of imminent loss as the absence of documentation—pedagogic, cultural, and historical among others—of the different permutations of Korean exile and diaspora only continues to widen as older generations are lost to us,” Kim said. “I hope to address this absence by exercising ethnographic, oral historical, and recorded methods of documentation and exploration. I also hope to do some personal work and, perhaps, learn something about my own position within the Korean diaspora.”

The 2019 Watson Fellows hail from six countries and 18 states. Fellows will travel to 76 countries exploring topics ranging from artificial intelligence to music subcultures; from food insecurity to island innovation; from neonatal to end-of-life care.