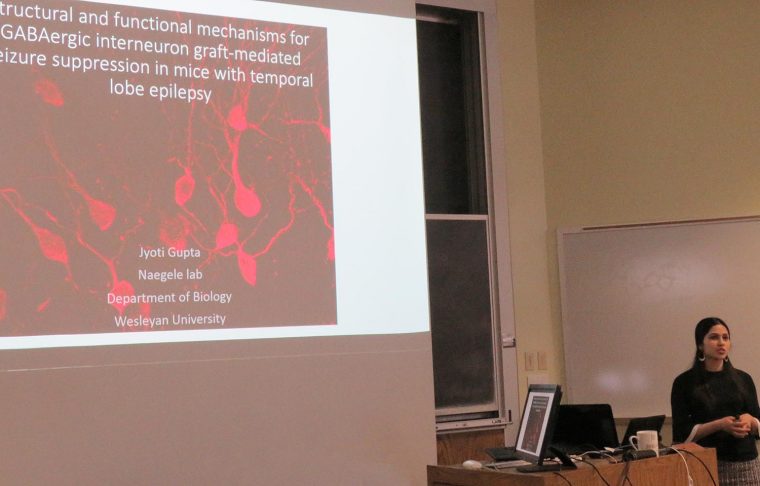 Adult neurogenesis, a process whereby new neurons are added to the brain, is thought to be confined in mammals to just a few regions, including the hippocampus, a structure important for learning. Whether this process occurs in the adult human brain is controversial, but in most other mammals that have been studied, adult neurogenesis in the hippocampus appears to be essential for forming memories.

Producing new neurons in the adult hippocampus is regulated by the environment, mood, exercise, diet, and disease. In some forms of epilepsy, the production of new cells in the hippocampus, called granule cells, becomes highly abnormal and the altered neurogenesis is thought to increase over-excitation and exacerbate seizures.

In the Naegele laboratory at Wesleyan, researchers are studying whether neural stem cell transplantation can reduce this abnormal adult neurogenesis in mice that have temporal lobe epilepsy. The research is spearheaded by Janice Naegele, the Alan M. Dachs Professor of Science; professor of biology; and professor, neuroscience and behavior.

“Our prior studies in mice with epilepsy showed that transplanting inhibitory neurons from the embryonic mouse brain into the adult mouse hippocampus reorganized neural circuits in the hippocampus and reduced seizures,” Naegele said. “In our most recent study, we asked whether transplanted inhibitory neurons formed functional synaptic connections with adult-born hippocampal neurons generated after the onset of epilepsy.”

The results of that study were published March 27 in eNeuro, an open-access journal of the Society for Neuroscience. The paper is titled “Restrained Dendritic Growth of Adult-born Granule Cells Innervated by Transplanted Fetal GABAergic Interneurons in Mice with Temporal Lobe Epilepsy.”

They first transplanted young inhibitory neurons into the hippocampus of mice with epilepsy and then identified newly generated adult-born neurons by labeling them with fluorescent viral vectors. To study their connectivity with the transplants, the researchers induced the transplanted cells to fire and release chemical signals onto their target cells—a technique called optogenetics.

Focusing chiefly on the growth of abnormal dendrites, long processes that are the sites of synaptic connections between cells, Naegele and her research team found that when adult-born neurons wired up with the transplants, they developed shorter dendrites. The dendrites are structures that are the receiving surfaces where neurons communicate with each other.

This new work shows that the inhibitory cell transplants in mice with epilepsy may reduce the abnormal overgrowth of dendrites in adult-born neurons, a change that could reduce hyper excitability in brain circuits.

Funding for this study was provided by Citizens United for Research in Epilepsy, the Alan M. Dachs Professorship of Science endowment, and Lisa and Randy Siegel ’83, who support undergraduates with research stipends and advocate for finding cures for epilepsy. Read more about the Siegel Family Research Fellowship in this Wesleyan Magazine article.