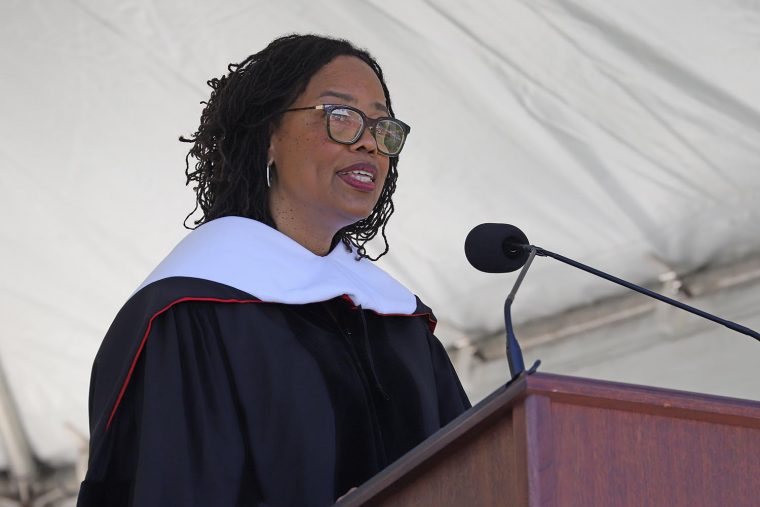 Saidiya Hartman ’84, professor of English and comparative literature and women’s and gender studies at Columbia University, delivered the 2019 Commencement address on May 26.

A prize-winning author and 2018 Guggenheim Fellow, Hartman is renowned for her creative combinations of historical research, critical theory, and fictional narrative in exploring “the afterlife of slavery” and its negative effects on the life chances of black Americans. Her essays on film, photography, and feminism have been widely anthologized. During the ceremony, Hartman was named an Honorary Doctor of Letters for “shining a light on those whose histories have been erased and for . . . ‘crafting a love letter to all those who have been harmed.’”

The commencement address, like the wedding toast or the eulogy, is a form of ritualized speech that marks a point of transition. It has its own stringent requirements and imposes its form. The speaker congratulates you for what you have done, acknowledges that you are special, avoids the uncomfortable facts and the ugly truths that have made it possible for you to sit on this lawn in your robes presenting a curated and lovely picture of what might be possible.

And I, the speaker, in acknowledgment and confirmation of this set of arrangements, the privileges and the inequalities which have allowed you to assume your seats and which have permitted me to command the stage for remarks that are not to exceed the allotted 10 minutes and directed to move, sway, inspire, confer recognition and enable all of us assembled to believe—at least for a moment—in the essential rightness of things, or at minimum to take pleasure in this moment to celebrate the day.

One is encouraged to read in this success—graduation from one of the best colleges in the U.S.—the prophetic signs of future greatness. Or one could offer admonitions about responsibilities and duty and remind you of the perilous state of the world, describe its routine and extraordinary brutalities, and the man-made disaster and everyday devastation of life on a damaged planet. Don’t worry. I don’t intend to do this, although it would meet the requirements of the genre.

You, the graduates, might listen attentively or distractedly—drifting in and out—because you are fully aware of exactly the kind of world you are stepping into and in all likelihood are as anxious as you are excited about this transition, this leave-taking from school and the parental home, this culmination that announces to you and the world your adulthood, your independence, your preparedness to do something to find your place. I won’t pretend to make any of this easier by telling you how to find happiness, or be all you can be, or advise you to practice random acts of kindness, or to live frugally and minimize your carbon footprint, or to be mindful of the damage you might do, the kind of harm that privilege affords. I will try to avoid clichés when and where possible, although be forewarned I might slip up and say something about making the world we want now or suggest the future is in your hands even as the future has been mortgaged, even as we are living at the end of the world.

I have tried to avoid saying such things or assuming the posture of wise counsel because I know you have spent the last four years dedicated to rigorous study, dedicated to developing and honing the intellect and to nurturing creativity. I know that you have studied with the best minds and encountered the great thinkers and visionaries in your seminars and exchanged and debated ideas with those students. This has prepared you for engaging and reckoning with the matters of the world.

I still remember the questions I grappled with in my seminars at Wesleyan. Is history a process not determined by human actors or a consciousness? Is there a fundamental relation between slavery and democracy? What are the responsibilities of the writer? What is the role of the organic intellectual in fomenting change? How is culture a radical tool for reconstruction? Is it possible to untether freedom from the history of slavery that secured it? Such questions changed me and I have spent the rest of my life wrestling with them.

What I understand about the world and how I imagine my place in it, has much to do with what I learned here. With my relationships with brilliant teachers like Hazel Carby, Judith Butler, Gayatri Spivak, Bill Lowe, Robert O’Meally, Richard Slotkin, and Annie Dillard. On the 50th anniversary of black studies at Wesleyan, I am confident that I don’t need to provide you with an abbreviated history of slavery and settler colonialism, of racial capitalism, white supremacy, fascism, and the long history of dispossession. I don’t need to recount the narrative of the republic and point out the obvious, the exclusions constitutive of citizenship, the liberty and equality erected on the foundation of stolen life and stolen land and the condition of rightlessness for all those not encompassed within the language of man and his inviolable entitlements and privilege.

I won’t belabor such points because I am speaking to a graduating class that has spent the last four years thinking about such issues and the historical and social forces that have made and shaped the world. A class cognizant of the intimacy of civilization and barbarism, value and predation, property and dispossession. The entanglement of the good life and the disposable one. You have been fortunate. You have enjoyed the luxury of devoting yourself to study and to the life of the mind. All that has been required of you is to write and think with impassioned teachers and committed classmates.

Now is the moment when you enter the world, and with this knowledge make a place with others. At the moment you arrive at what you wanted to be: a graduate, an educated person, a diploma-bearing debtor. You lose yourself, shift from one phase of becoming to another. Because every achievement is a culmination and a beginning. Every accomplishment points toward what has yet to be done; having arrived at the goal, you are lost again, needing to find your way to the next stage of things, forced to leave this self, this incarnation of you to enter anew.

The essence of who one is, as Hannah Arendt notes, comes into being only when life departs, leaving nothing behind but a story. Until then, this process of accumulating meaning and experience, love and loss, accomplishments and failures, victories and defeats, constitutes life. The beauty and constancy of this undoing and remaking of the self over and over again.

Today marks an auspicious culmination. I suspect many of you are preoccupied, if not anxious, about what is next, what comes after this. The gift of bare uncertainty that hurls you into adulthood. Part of me is on the lawn with you, still that young woman sitting with her class, lost in thoughts about what the future might bring, unsure, expectant, anticipating another world yet absolutely unknowing what its course or where things will turn. This is not to say that I am young. Quite the opposite. Only to underscore that I, too, am open and uncertain and not unhopeful regarding what the future might bring. It is to acknowledge that more time is behind me than ahead of me and that the opposite is true for you. We are here today to celebrate the opportunity and possibility that resides in that simple fact as much as to celebrate any degree in your hands.

So, I guess these remarks are really an elaborate ask masked as a set of reflections, as way of making a claim on you, imploring you to speculate about how the world might be otherwise. To make good the promise of another set of human arrangements no longer characterized by the brutal distribution of death and precarity, by racism, hatred, and cultivated indifference, by violence abstracted by algorithm and derivative, or embodied visceral and immediate by the extraction and monopoly of the planet’s resources, by gender and sexual violence.

I ask you this: What the world might be or how we might live in the fierce urgency of our now despite my attempts to refuse the conventions of the genre and as if being acted upon by some seemingly eternal repetition, compulsion, being directed by the collective yearning for a world better than this one, yielding to a desire . . . no, an imposition that I cannot dislodge or refuse.

So, I am asking you in anticipation of achievement and disappointment and accomplishment and failure to make another way, to trace a different path to another set of social arrangements so that we might all live.

Today, we honor you because of what you have achieved and where you have arrived, and we rejoice at the promise signaled by this graduation, which is a step in a process, a transformation, a condition, a change from one state to another, a turn in the road, a pause or rest in the process of becoming. We rejoice today in anticipation of where you might be headed and the world you might remake.

It is custom to announce the significance of such arrivals and departure with rituals and ceremony. So, Class of 2019, we celebrate you.