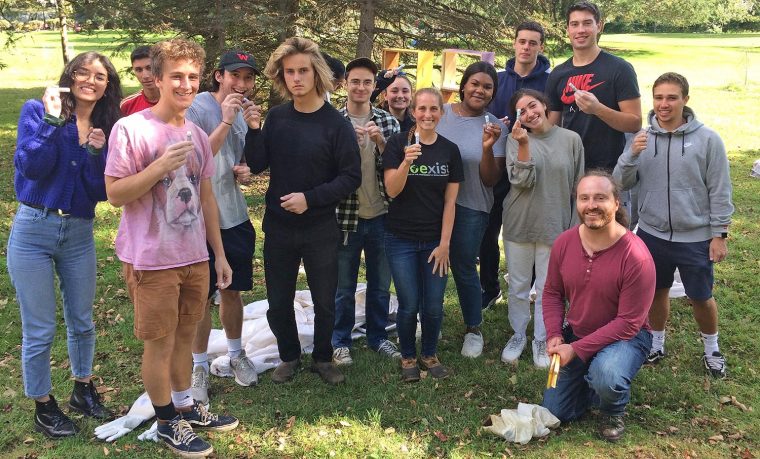 After the students donned the beekeeping suits, Burnett opened several of his hives to point out the different types of honeybees living in them, including the workers and drones.

“In a stroke of luck, we observed the queen in each hive we opened,” Burnett said.

Burnett discussed the various sections of the honeycomb, including those that contain honey, as well as honeybee larva. He also explained how honeybees prepare for and survive the winter, and shared some of the issues honeybees are facing today, such as the presence of Varroa mites. Another topic of discussion was the role of business in addressing environmental crises, as well as some of the specific challenges Drew’s Honeybees has faced.

The presentation—and the entire visit—served as a valuable complement to the course, Ostfeld said.

“Simply reading about pollinators and listening to a lecture is not the same as getting to see how beekeeping works firsthand,” Ostfeld said. “Drew and Curtis were ‘un-bee-lievable’ hosts, and it was exciting to learn about beekeeping and how his company exists to do good.”

Burnett said a highlight of the visit was “seeing the students’ keen interest in the particulars of honeybee husbandry and their amazement at the docility of bees. I was heartened by their engagement with the environmental crises facing their generation,” he said.

Read a Q&A with Ostfeld about sustainable agriculture on this College of the Environment coexist blog post.

Photos of the field trip are below. (Photos courtesy of Rosemary Ostfeld)