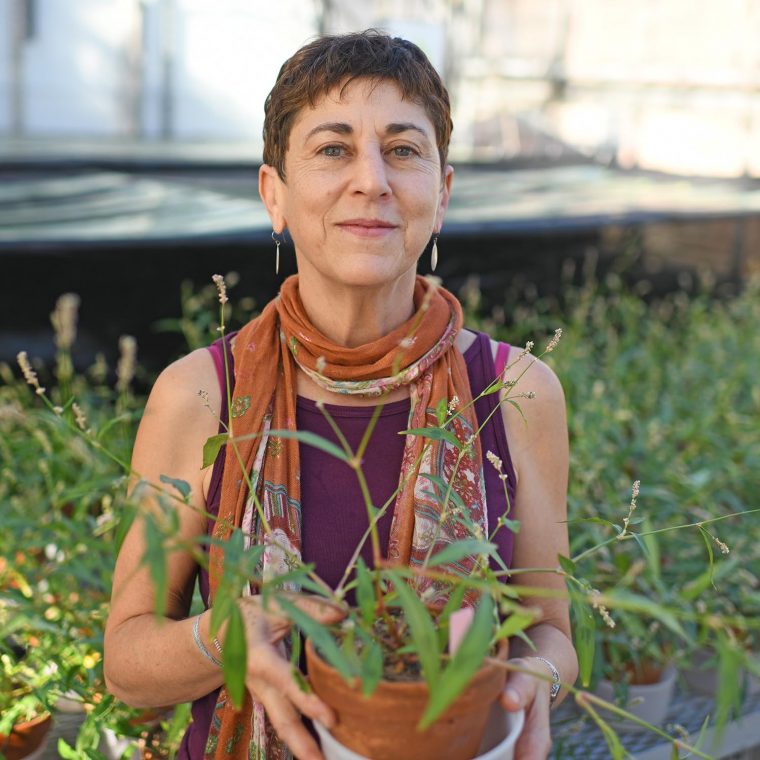 With support from a $2 million John Templeton Foundation National Sciences grant, Professor of Biology Sonia Sultan will spearhead a multi-institution evolutionary biology research project over the next three years.

The project, titled “Agency in Living Systems: How Organisms Actively Generate Adaptation, Resilience and Innovation at Multiple Levels of Organization,” developed from Sultan’s research on how individual organisms respond to their environments. Sultan and her Wesleyan research group study this question through experiments with the common plant Polygonum.

Sultan’s previous findings have shown that genetically identical Polygonum plants can develop very differently depending on their growth conditions, allowing adaptive adjustments by individual plants without any genetic change. Because these adjustments are made actively by plants, rather than pre-scripted by their DNA sequence, this insight poses challenges to prevailing conceptual models for development and evolutionary adaptation.

“Scientists are particularly keen to understand these types of induced changes because they may help populations to very rapidly adapt to novel environmental stresses caused by human activities,” Sultan said.

The Templeton Foundation grant supports a consortium to investigate more broadly this property of biological agency—the ways in which active, real-time responses by living organisms influence the organisms’ own features. Sultan and her international team of co-investigators will focus on the active response mechanisms produced by evolution that grant organisms a degree of agency in shaping their own development, behavior, and subsequent evolution.

“New findings over the past decade about gene expression, development, the nature of inheritance, and the basis of adaptation, have led developmental and evolutionary biologists to re-examine some fundamental and long-standing ideas,” Sultan said. “The concept of agency may provide a unifying framework at a time when many scientists are seeking to update and expand those ideas. This project gives us the opportunity to help move the field forward and hopefully contribute to a more nuanced understanding of organisms.”

Sultan will collaborate with a team of researchers whose groups will examine distinct biological levels: variable gene regulatory pathways (co-leader Armin Moczek, Indiana University), cell and tissue interactions (Jukka Jernvall, University of Helsinki), whole-individual plasticity (Sultan), and social-colony collective behavior (Deborah Gordon, Stanford University). In addition, philosopher of biology Denis Walsh and his group at the University of Toronto and the Sorbonne will address the conceptual and theoretical implications of biological agency.

The grant supports collaborative travel among the team and postdocs, as well as international workshops to bring together prominent researchers and philosophers of science.

Wesleyan’s portion of the grant will fund further experiments in Sultan’s lab on how parent plants transmit environmental adjustments to their progeny, a trans-generational aspect of response that has only recently been discovered in plants and animals by her lab and several others.

These inherited developmental effects are often mediated by stress-induced epigenetic changes to the DNA molecule, as Sultan’s recent work (published in Proceedings of the Royal Society; Frontiers in Plant Science; and a special issue of Transactions of the Royal Society) has shown in the case of both drought-stressed and light-deprived parent plants.

Her lab’s work under the Templeton project will trace the effects of parental and grandparental light environment on progeny throughout the lifecycle, using a combination of multi-generation greenhouse growth experiments, molecular studies, and fieldwork in local Polygonum populations. A new post-doctoral associate, as well as research students at the undergraduate, BA/MA, and PhD levels, will participate in this research.

“The Templeton Foundation grant will allow my lab, as well as my co-investigators, to produce substantial insights to the complex response capacities of organisms,” Sultan explains. “Most exciting of all, by integrating this research into the development of a formal theory of biological agency, it provides a chance to explore new ways of thinking about living systems.”

previousWhat's the Buzz About Pollinators? Class Visits Local Apiary to Find Out