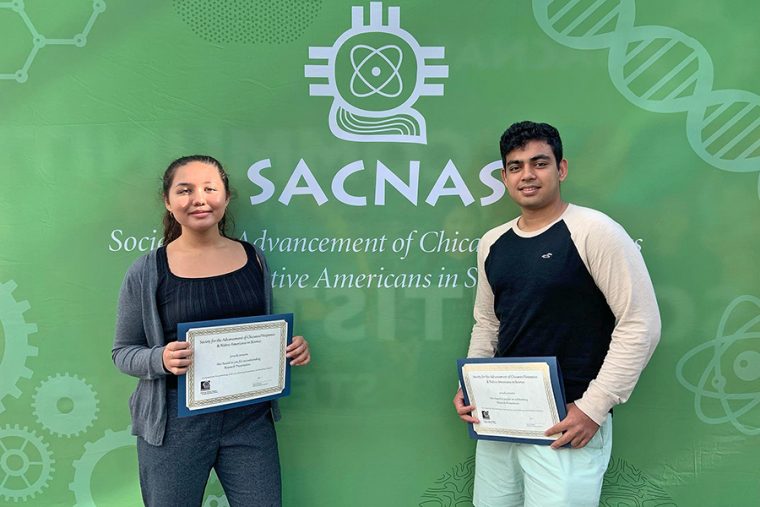 From Oct. 31–Nov. 2, Elizaveta “Liz” Atalig ’21 and Ekram Towsif ’21 joined more than 4,000 peers at the 2019 SACNAS (Society for Advancement of Chicanos/Hispanics and Native Americans in Science) conference in Hawaii. For more than 45 years, SACNAS has served as an inclusive organization dedicated to fostering the success of Chicano/Hispanics & Native Americans, from college students to professionals, in attaining advanced degrees, careers, and positions of leadership within STEM.

Attendees of the three-day conference are immersed in cutting-edge scientific research and professional development sessions, motivational keynote speakers, a career expo, multicultural celebrations, and an inclusive and welcoming community of peers, mentors, and role models.

In addition, both Atalig and Towsif received Outstanding Research Presentation awards in their respective disciplines.

“This is the first time McNair fully funded Fellows to participate in the SACNAS conference, so we’re very proud of Ekram and Liz for maximizing their conference experience and conducting their award-winning poster presentations,” said Ronnie Hendrix, associate director of the Wesleyan McNair Program.

Atalig, a native of the Asian Pacific Island of Saipan, is a computer science major and College of East Asian Studies minor. She presented her research titled “A Data-Driven Approach to Transparency in Political Ads on Social Media.” Her work focuses on finding hidden connections between funding entities for Facebook political ads by implementing a “locality-sensitive hashing” algorithm, which compares ads on their text similarity. Though this algorithm, Atalig is able to find funders that have similar or exact ad content and examine any connections between those funders. Her advisors are Saray Shai, assistant professor of computer science; Erika Franklin Fowler, associate professor of government and director of the Wesleyan Media Project; and Pavel Oleinikov, associate director, Quantitative Analysis Center.

“Being Pacific Islander, I rarely get to see people with similar backgrounds highlighted for their research in STEM,” Atalig said. “This was the first time I met and saw other Pacific Islanders in STEM, heard about their journeys, and was exposed to research being done on these islands.”

While participating in the conference, she attended several inspirational talks on topics such as climate change and its effects on the Pacific Islands and ancient voyaging techniques of the Polynesians. She also attended the career fair, where she made meaningful connections with employees from the National Security Agency, Central Intelligence Agency, Amazon, and Google.

“The SACNAS conference by far was the most rewarding conference I have attended, from being able to network with individuals doing similar research … [to] making me proud to be a Pacific Islander woman in STEM.”

Towsif, a native of Bangladesh, is majoring in physics, molecular biology and biochemistry, and the College of Integrated Science. He presented a poster titled “Electronic Spin PT System Dynamics.” Towsif models and experiments with magnetic systems by modulating the energy (electromagnetic waves) input and output, allowing him to understand the underlying physics of the systems in order to implement them in novel technologies. His advisor is Fred Ellis, professor of physics.

Like Atalig, Towsif attended the conference’s career expo and connected with representatives from various graduate schools and companies. He also enjoyed learning about Hawaiian culture and history through various cultural performances and lectures by native Hawaiians and was able to participate in a field trip at the University of Hawaii: Manoa, spending a day with physics department faculty and graduate students. “The experience allowed me to pierce into the dynamics of graduate school at another university where I potentially may apply to further my education,” Towsif said.

“Going to the conference was an amazing experience—especially getting to network with people in physics and getting to know the kinds of research they are doing at other institutions,” Towsif said. “I was able to talk to multiple schools and companies about their options in terms of higher education, such as obtaining a PhD, all within the span of a couple of hours. Such an opportunity doesn’t normally happen every day, and I was privileged to be given that opportunity through the support of the McNair program.”