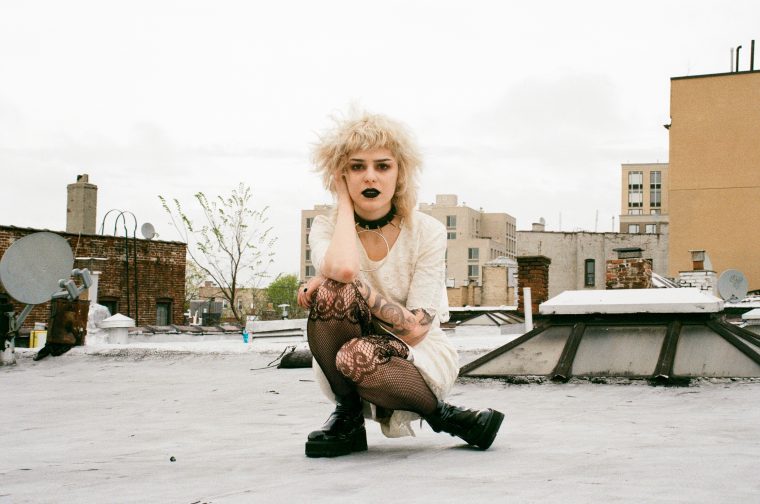 Along with other musicians around the world this week, Goth Girlfriend (Gaby Giangola ’17) posted her “2019 Spotify Wrapped” overview to Instagram. Accompanied by the caption “gotta start somewhere, eh?,” the photo summarizes the number of streams and listeners who tuned in to Goth Girlfriend’s music on the streaming service this year. The caption encapsulates Goth Girlfriend’s tireless ambition.

The up-and-coming artist’s music is self-described as banshee rap or alternative rock; her sound is raw and meticulous at the same time. The five tracks on her recent EP, Sex Sprain, mix guitar chords and hip-hop beats with punk vocals, and touch on themes of isolation, mental illness, sexism, and the hedonism of a “sympathetic nervous system surging for kicks.” By night, Goth Girlfriend is a singer-songwriter, bassist, and DJ. By day, she is Gaby Giangola, an administrative assistant at an entertainment law firm in New York City. This dichotomous identity defines not only her working week, but her artistic expression as well.

Fitting a music career into her life, along with a 45-hour-a-week office job, is a juggling act. Before taking a six-month hiatus from playing shows to record Sex Sprain, Giangola was performing live whenever and however she could. The New York City music scene is saturated with talented artists, so opportunities to play live shows require a lot of promotion and venue searching on the part of the artist. “There was one time where I had a really good deal and was getting paid a nice sum of money,” said Giangola of a recent booking as a DJ on weeknights. “The gig ended at 4 a.m. and I had work at 10 a.m. the next morning.”

Compared to being at Wesleyan, “having that work-life balance is definitely a challenge.” Giangola recalls that while she was at school, majoring in music with a writing certificate, she had chunks of time during the day to work on her passions. Under the name LARS, she released an LP senior year, and also began DJing through the Eclectic Society. Reflecting on the support she found in Eclectic, Giangola said, “I just didn’t have the confidence before. It was difficult to perform and [Eclectic] really boosted my confidence, having that community where people are like, ‘You know what, just go for it. And even if you mess up, who cares?'” Also, the access to consistently being able to DJ live shows helped Giangola hone her craft. “I would never even be in this place if it weren’t for Wesleyan.”

After graduation Giangola adopted her current moniker, Goth Girlfriend. She initially came up with it as a joke Instagram handle, influenced by goth girlfriend memes and her personal aesthetic. “Some people have a stuffed teddy bear,” Giangola joked. “When I was little, I had a stuffed skeleton.”  The moniker is not just a brand invented for Instagram; it stuck because it reflects Giangola’s artistic identity. The name captures the dichotomy at play in her music: the goth who’s hard and unapproachable versus the girlfriend who’s vulnerable and writes songs about love.

At the same time, Giangola is aware that the goth girlfriend meme that prompted her name represents a fetishized image. Many of her lyrics are tongue in cheek, but she explained the more earnest lyric, ‘I’m your goth girlfriend, no relationship stuff,’ as a reflection of “our culture. Millennial, Gen Z culture. People want to have physicality, but without the relationship stuff.” When Giangola finished Sex Sprain, she said: “It was almost as if there was a poison cleansed out of me.” Rendering into music the objectification and isolation she felt from relationships without “the relationship stuff” had turned painful experiences into empowerment.

Nevertheless, Giangola acknowledges that her image leaves her at a crossroads. It is a fact that if she posts a selfie rather than a flyer on Instagram to advertise a show, the selfie will get more attention. “I don’t feel shame in doing that,” she said, “but I do wish the music could stand on its own. At the same time, we do live in a very visual world. It’s a push-and-pull, I suppose.” At the end of the day, Giangola is matter-of-fact: “A stream is a stream, and a listener is a listener.”

Despite having to navigate the concessions expected of up-and-coming artists, Giangola has found many rewarding spaces early in her music career. “Of the shows I’ve played,” she said, “I’m treated so much better at ones in the queer scene. I’m always paid on time, no one is snobby about sound, people are really on point and take everyone seriously.” Her day job at the entertainment law firm also provides a perspective that enriches her music career. Through seeing the legal struggles and successes of other musicians, Giangola has realized, “It’s a dog-eat-dog world out there, and now I have a much better understanding of how to protect myself.”

Right now and in the near future, Goth Girlfriend is playing shows in New York, writing new music, working on a music video for the song “Nail Polish,” and collaborating with other artists. As for advice to current Wesleyan students, Giangola said, “Take advantage of your spare time while you still have a chunk of three hours in the day to work on your passion.” Finally, and most importantly, “wear earplugs at concerts.”