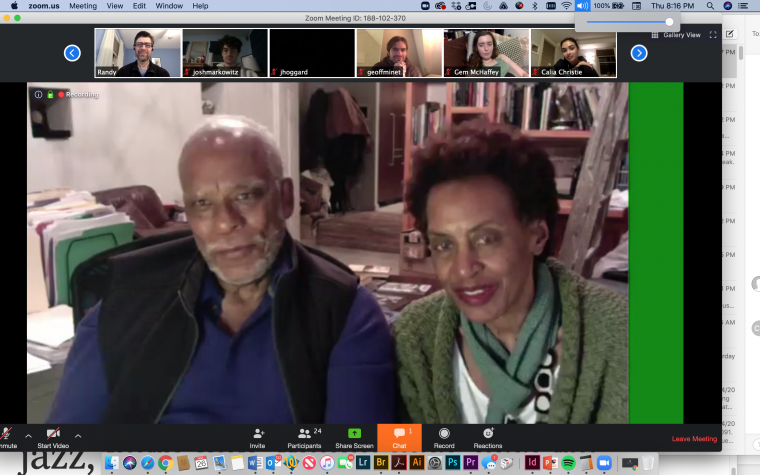 Stanley Nelson and Marcia Smith, together P’22 and founders of Firelight Media, joined the Wesleyan Documentary Project co-directors Tracy Strain and Randall MacLowry ’86 for an online forum with the Wesleyan community to discuss Miles Davis: Birth of the Cool, for which Nelson was director/producer and Smith was consulting producer.

Additionally, Strain, who had discussed the film in her Documentary Storytelling class earlier in the day, and MacLowry, who is teaching Advanced Filmmaking this semester, invited their students to attend the virtual Q&A with Nelson, the film’s director/producer, and Smith, president of Firelight Pictures and the film’s consulting producer. The two are an award-winning team of documentarians.

The professors invited those attending the virtual gathering to watch the film (which is available on Netflix) prior to the conversation and to submit questions in advance via Google Forms sent out to the Wesleyan community.

Serving as moderator, Strain posed questions drawn from these previously submitted ones, before opening it up to those in attendance at the forum. This event replaced what would have been the post-screening Q&A on campus, she noted.

“The best part of filmmaking is showing it to an audience; that’s the gravy of filmmaking,” Nelson acknowledged.

Strain began the event by asking, “Why did you decide to do a film on Miles Davis?”

“I’m a great music fan, and I wanted to do a film about jazz,” said Nelson. “Miles was one of my favorites. There’s such a story there—this different and strange character—and so much we could bring in, being black and American.”

Further questions included details about the photo montages that serve to establish a timeframe in this film without a narrator; the choice and placement of music throughout the film (“You can’t go wrong with Miles,” noted Nelson); and the cooperation from Davis’s family and many collaborators who spoke on camera.

Additionally, Smith addressed the way the film presented Davis’s intimate relationships: “His abuse to women, we had to deal with it; that wasn’t in question, it was how we would handle it,” she said. “And Frances Taylor … saved that issue because she is so self-possessed; her self-regard is so intact … [it] is well established as part of her character in the film, and at the end of the day, she got out of that relationship. … There were women we interviewed who spoke to it who clearly had a lot of affection for him but were not going to put up with that behavior. This was a way for us to deal with that issue in the film that was consistent with putting the priority on the music but not ignoring this part of his character.”

Nelson emphasized the importance of editing, noting the length of time—more than a year—that the team spent on that part of creating the story of Davis’s life and work. “When we make out the budget, we weigh it heavily toward editing and try to have as much time there as possible,” he said. “These films are made in the edit room.”

Another point Strain raised from the submitted forms was that the opening scene of the film did not show Davis playing his trumpet, as might be expected. Instead, the filmmakers used footage of the musician boxing, and the community member hoped Nelson and Smith would comment on this choice.

”We had so many ways to open the film. But the boxing motif just said something about Miles,” Nelson recalls. “It was him shadowboxing. He wasn’t even boxing with someone else. It was Miles against the world.”

previousMotlagh '20 Volunteers for Campaign in Rural N.H. as Part of E2020 Project