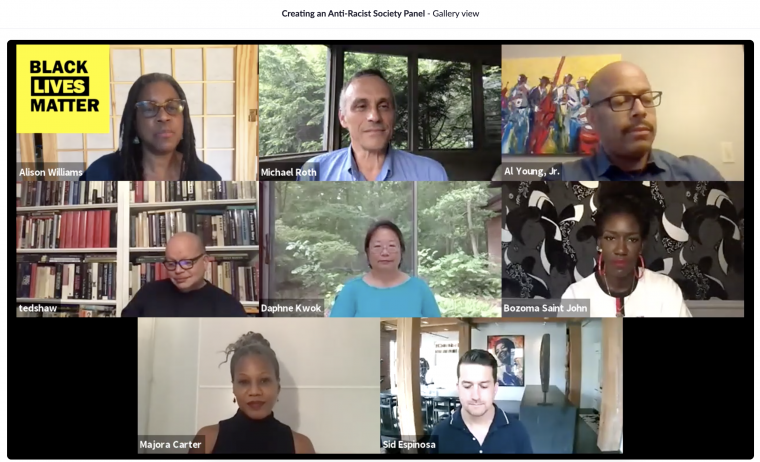 The recent death of George Floyd, a 46-year-old black man killed while being forcibly detained by police, has ignited the United States and brought issues of inequality and violence against black people to the forefront of the national consciousness.

Alison Williams ’81, vice president for equity and inclusion/Title IX officer, and Wesleyan President Michael Roth ’78 hosted a panel discussion on Thursday, June 11, titled “Toward an Anti-Racist Community,” featuring six alumni of color who discussed how to move beyond the pain and trauma of the current cultural moment toward constructive action.

“What I hope is that this will be the beginning of many conversations that lead to transformation both at Wesleyan and beyond,” Williams said. “This requires that we first take a look at our own attitudes and biases and do some personal work. . . . Until we do the personal work, any structural or institutional changes that we implement will be meaningless.”

“We feel confused, angry,” President Roth said during his panel introduction. “Sometimes energized, sometimes full of despair. When I have that mixture of feelings, I turn to friends and colleagues . . . I want to listen.” “What [this moment] really made me do was frankly just double down on the work that I’m already doing,” Carter said. “Trying to create opportunities from the inside out that create more opportunities for economic diversity within our own communities, that give us the opportunity to be the economic keys to our own recovery, that will allow us to not be so vulnerable in every single way whenever any kind of drama or trauma happens to our people. When we do this right, and we will, everyone in the country will benefit from it.”

Carter’s remarks typified a discussion that, while displaying a variety of personal emotions from the panelists, was united in its focus on highlighting the difficult realities that people of color face all over the country and unifying the populace—young people in particular—in collective action. Several of the panelists stated that they believe higher education generally, and Wesleyan specifically, has both a history of and a responsibility to serve as a locus of change.

“[Wesleyan’s] has never been a student body who has been silent or non-expressive,” Saint John said. “I think it’s the responsibility of the University and those of us on this panel to open doors for young people who are discovering their voices and making their way to actually act on these things. . . . The University has a responsibility to allow those dreams to take shape.”

“Higher education institutions have a long history of perpetuating racism in all sorts of ways and they’re not prone to change,” Espinosa said, pointing to a need for higher education not only to consider practices once students are on campus, but the kinds of access they facilitate before students arrive and the kinds of support they provide after students graduate. “If [change] doesn’t come from places like Wesleyan, I’m not sure where it will come from because this is an institution that believes we can do better. I love this place and I think this is an opportunity to think about some of the structural parameters that we control. We control these things, and we can institute change.”

Young, a University of Michigan professor, sociologist, and author of Are Black Men Doomed? (Debating Race), which President Roth cited as an influential text for his own thinking, highlighted the disparity he sees in his own state between the realities of different communities. This disparity has been exacerbated by the ongoing COVID-19 pandemic, in which Young said the Ann Arbor community surrounding the University of Michigan was able to mobilize far more resources than it ended up needing. In nearby Detroit, however, Young noted that the pandemic continues to ravage a community that is largely composed of people of color. In these differences, Young sees a disparity and an opportunity that must be attended to.

“I don’t think black men or Americans more generally are doomed,” Young said in response to President Roth’s noting his book’s title. “But I think we’re not attentive enough to how many opportunities we miss to respond in the right way. . . . I think of the present moment that we’re in. Had we paid more attention to Colin Kaepernick when he took a knee prior to a football game, we might not be here. Had we paid more attention to Rosa Parks when she sat on a bus seat, we might not have been in 1968 where we were. There is so often the thought for me that we’ve had moments that should have inspired action and didn’t.”

Kwok (along with Carter, Espinosa, and Saint John at different points) also highlighted how important she feels it is for young people to consider corporate careers so that they can build out their skill sets, learn how to work across sectors, and advocate for their communities and for change at levels where decisions and policies are being crafted and implemented firsthand.

“As I’ve matured, I’ve realized my advice is: You ought to go into corporate America,” Kwok said. “You ought to go into those major law firms. You need to go in and learn the business. Get those skills. And then come back to serve the community . . . at a higher level.”

Shaw followed such a path, practicing as a trial attorney in the Honors Program of the U.S. Department of Justice and working in a variety of different roles at the NAACP Legal Defense Fund before beginning his work at the UNC Center for Civil Rights. In his closing remarks for the panel discussion, Shaw stressed the importance of civic engagement in supporting and bringing about real, actionable change, also a focus for Wesleyan’s Engage 2020 initiative.

“If it’s not apparent at this time that people need to exercise all of the responsibilities of citizenship, I don’t know when it will be apparent,” Shaw said. “We are at a moment when there are existential threats to American democracy. And I would hope that young people see that. . . . I deeply believe that the challenges we have today—they’re not going to be solved by my generation. I’m not ready to lay down yet, but they’re going to be solved by the younger generation.”