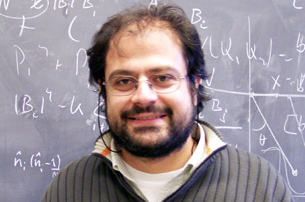 With support from the Simons Foundation, Tsampikos Kottos, Lauren B. Dachs Professor of Science and Society, professor of physics, will work on groundbreaking wave transport research, ultimately benefiting a broad range of technologies ranging from wireless communications and efficient energy harvesting, to biomedical and avionics sensing technologies.

Kottos is one of 11 principal investigators (PIs) from 12 universities and research institutions across the globe to receive funding from the Simons Collaborations in Mathematics and the Physical Sciences Initiative. The group’s project, “Harnessing Universal Symmetry Concepts for Extreme Wave Phenomena,” is based at the Advanced Science Research Center (ASRC) at the Graduate Center of the City University of New York. (Read Kottos’ ASRC bio online here.)

During the first four years, Simons is awarding ASRC $8 million, out of which Wesleyan is receiving $600,000. In the second phase, Simons will award an additional $8 million.

The grant aims to stimulate progress on fundamental scientific questions of major importance in mathematics, theoretical physics, and theoretical computer science. This research aims to further the fundamental understanding of and ability to manipulate light and sound waves in order to facilitate the development of novel wave-based technologies.

“This is an extraordinary opportunity for Wesleyan to be part of this international coalition, which hopefully will address the next generation’s needs of classical wave-based technologies,” Kottos said.

In addition to participating in the research, Kottos also is serving on the Simons Collaboration Initiative steering committee.

previousTan '20 Honored by Geological Society of America for Poster Presentation