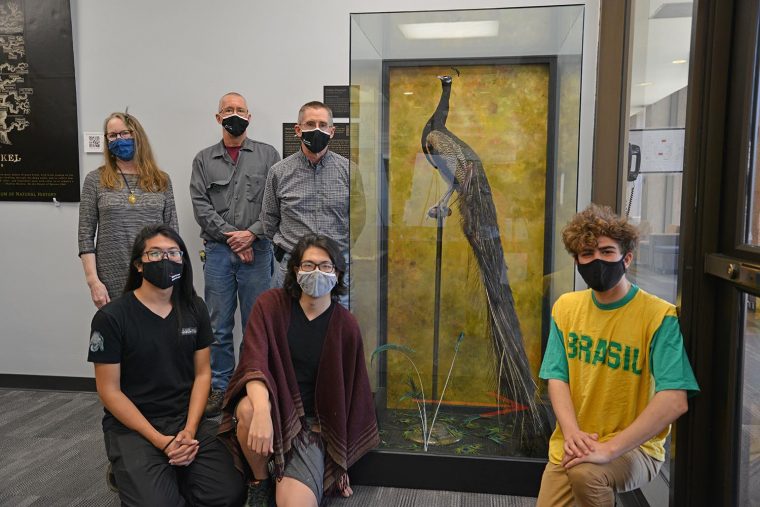 The entrance to the Science Library in Exley Science Center houses a taxidermied peacock that has been restored by faculty and students in the biology department. The peacock, originally rediscovered in 2018 and put on exhibit in spring 2019, is part of a bird collection that was first displayed at the museum in Judd Hall and now belongs to the Wesleyan Museum of Natural History.

“It was found in storage alongside a whole bunch of minerals in Room 316 of Exley,” Yu Kai Tan said. “It was sitting way up high on this shelf, and probably since 1970, no one has looked at it or touched it. It was covered in dust and muck.”

When the team first found the peacock, it was in such poor condition that they needed to call for outside help.

“It was all black and in really terrible shape and we contacted…one of the preparators of the Yale Peabody Museum, Michael Anderson, [who] came over to help us with cleaning and prepping the peacock,” Andy Tan said.

According to Burke, Anderson has helped the team with much of the direct work on the birds. When the peacock was first taken out of storage in Exley, where it had been for over sixty years, Anderson worked to stabilize the mount and clean the peacock as much as possible.

“He [removed] the dust and cleaned the upper part of the body as much as he [could] but the tail is way too fragile, so we decided to leave it as is and put it [in the] exhibit to preserve the historical value as well as the specimen’s value,” Yu Kai Tan said. “We have fresh peacock tail [feathers]…just as a contrast, so people see what they look like fresh and live, as compared to the peacock specimen.”

“This is an exhibit with new labels, and the new feathers on the bottom show the contrast between an old specimen that hasn’t been cared for and a fresh specimen,” Yu Kai Tan said. “We also have done some routine maintenance, which we should always do but don’t do often enough.”

The mount was a gift to the University, recorded by the Wesleyan University Bulletin from 1903 as “a fine mounted specimen of a peacock, presented by Mr. J. Peters Pelton.”

“The Peltons are an old Middletown family. We are hopeful of digging up more information on the gift from the archives, which is part of our big project,” Burke said.

The peacock is part of the history of the University, and the restoration team intends to uncover more about it in the coming months.

“If we reflect on the history of the peacock, it’s this link to institutional memory, to the local community, and as well as the practices of collecting back then in the last century,” Yu Kai Tan said. “So anyone who knows nothing about biology or natural history in general, should and can come and get involved and do projects related to the collections.”

The team also emphasized how the collections are supposed to serve as a resource to students.

“You don’t have to be a science major or a biology major…we used to have art classes coming in here to draw specimens,” Andy Tan said. “And you can do a history project on anything we have here in the archival collection, we’ve had [College of Letters] majors doing their theses here. We welcome anyone to use the resources and join the museum crew.”

Members of the same restoration helped install a single-tusked walrus in Olin Library in January.

Watch for more on Wesleyan birds next fall.

Photos of the installation are below: (Photos by Willow Saxon ’24)