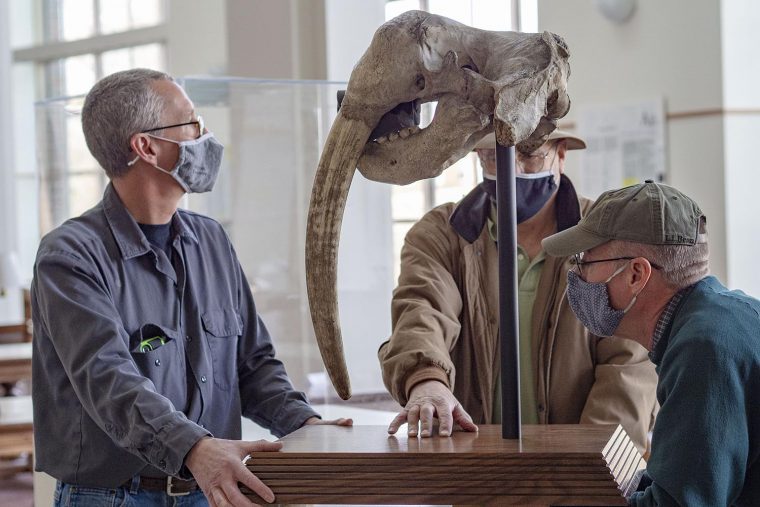 Olin Library’s newest resident is looking for a good book to sink his tusk into.

The skull of a one-toothed walrus, which was installed in the Campbell Reading Room on Jan. 20, is the University’s latest exhibit on display from the former Museum of Wesleyan University (1871–1957). The piece was donated to Wesleyan 145 years ago by the Smithsonian National Museum of Natural History but has spent about half of its university life in storage.

The 26-pound skull, which is missing its right tusk, belonged to a Pacific walrus (Odobenus rosmarus divergens) living along the Ugashik River in Alaska in 1876. The aquatic mammal would use its tusks to climb onto ice flows, attract mates, establish social structure, or for combat.

“We’re not exactly sure what happened to its other tusk,” said Professor of Biology Ann Campbell Burke. “In the wild, they don’t naturally shed their tusks, but they do get broken. This one was removed after death.”

When the Judd museum closed in 1957, the Wes walrus was placed in storage in the Anthropology Department, and in 2007 it moved into the custody of the Biology Department. Professor of Biology Ann Campbell Burke used the specimen in her Comparative Anatomy and Macro-evolution classes, and in 2017 she returned the skull to Wesleyan’s natural history collections.

Because the piece is an actual skull—as opposed to a cast—the bone itself can be used for future research. While mounting the skull and articulating the lower jaw, the crew consulted with ancient DNA expert and Assistant Professor of Archaeology Katherine Brunson on using bone dust to extract DNA.

“When sequenced, the collected DNA can give us information on the sex of the walrus, as well as other genomic data,” Andy Tan said.

For the display, James Zareski, research assistant/lab manager in the Earth and Environmental Sciences Department, created a wooden mounting pedestal, and Bruce Strickland, scientific support services instrument maker specialist, designed and constructed a metal armature to support the skull and attached its mandible (jaw) to recreate a more lifelike position of the skull and jaw.

“The jaw itself weighs about 5 pounds, which makes it very dense for a bone—a hallmark of water-dwelling mammals,” Yu Kai Tan said.

Although the Pacific walrus is protected by the U.S. Marine Mammal Protection Act, it could be in danger of extinction due to climate change, explained Ellen Thomas, Harold T. Stearns Professor of Integrative Sciences and Smith Curator of Paleontology of the Joe Webb Peoples Museum of Natural History.

“Walruses, which are relatives of seals, are ‘pagophilic (ice-loving) pinnipeds,’ i.e., they are seal relatives that live within less than 25 miles from the edge of sea ice,” Thomas said. “The reliance of walruses on sea ice to rest during summer foraging makes them vulnerable to global warming.”

The walrus skull is the second specimen from the natural history collections to be displayed in Olin Library; crews installed a Mosasaur cast in Olin in June 2020.

Photos of the mounting, installation, and specimen photos are below: (Photos by Andy Tan and Yu Kai Tan)

previousWesleyan Prepares for Students' Return to Campus This Spring

next3 Works of Poetry Nominated for NAACP Images Awards