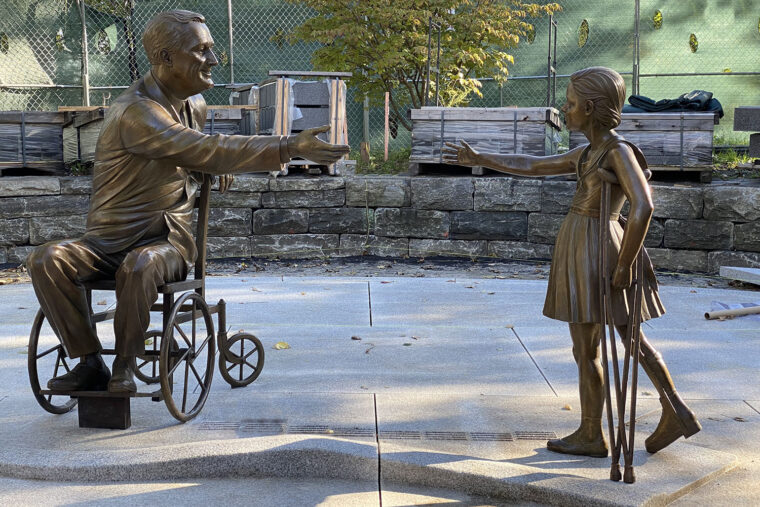 “You gain strength, courage, and confidence by every experience in which you really stop to look fear in the face. You are able to say to yourself, ‘I have lived through this horror. I can take the next thing that comes along.’ You must do the thing you think you cannot do.” — Eleanor Roosevelt, former First Lady of the United States

In 1932, wheelchair-bound Franklin D. Roosevelt became the first (and only) United States president to hold the top office with a severe disability. While the public was well aware of his paralysis, Roosevelt never let his illness hinder his efforts leading the country—exemplifying success, leadership, and especially perseverance.

Nearly 90 years later, Wesleyan alumna Meredith Bergmann ’76 is hoping Roosevelt can inspire the public once again. To honor his legacy, she’s created a larger-than-life-size bronze memorial of FDR, seated in his wheelchair, reaching out to shake the hand of a small girl with polio.

Located in Southpoint Park, just north of the Franklin D. Roosevelt Four Freedoms Park on Roosevelt Island in New York City, Bergmann’s addition to the FDR Hope Memorial project was an 11-year project in the making. The work was unveiled during a public ceremony on July 17.
“I hope FDR’s legacy of social programs will inspire contemporary politicians and lawmakers to create a more just, supportive, and inclusive society, but that’s not the focus of this memorial,” Bergmann said. “I hope this will function symbolically to inspire anyone who’s struggling with a crippling problem—not just a physical disability, but any kind of mental barrier to their growth and fulfillment—to feel encouraged and emboldened to live and to grow, to overcome their barriers.”

In 2010, Bergmann was commissioned to create a memorial that would interpret the “history and vision” of the island and its inclusive community where those who were disabled had long been “mainstreamed.”

At the time, she didn’t know a lot about FDR, but the project felt personal. Like the former president, her severely autistic, non-verbal 12-year-old son was also navigating life with a disability.

“Although he still suffers from the constraints of autism, [her son] recently graduated with honors from college. So this project stands out. . . . In researching this project I learned a lot about people and disabilities in general, which was helpful and inspiring to our whole family.”

Bergmann’s work features two figures—FDR and a young girl—about to shake hands. Roosevelt appears in one of his homemade wheelchairs, turning to greet “Hope,” who dons crutches and a leg brace. The back collar of her 1930’s dress lifts slightly to suggest a wing, Bergmann says, “as if she were descended from the ancient winged goddess of hope.”

She left ample space between the two subjects, which allows for physical interaction with the statue; anyone can “step in” and shake FDR’s extended hand.

“I wanted to portray the vitality and eagerness to connect to other people for which FDR was famous,” Bergmann said.

The majority of Bergmann’s public work has an underlying theme of social justice and historical redress, and she tends to immerse herself in the histories and missions of all her sculpture subjects.

Other recent works include the Women’s Rights Pioneers Monument in Central Park; a September 11th Memorial at the Cathedral of St. John the Divine; the Boston Women’s Memorial; and a heroic portrait of the enslaved child Sally Maria Diggs at the Brooklyn Historical Society.

“I was able to study anything I wanted—and did—which was disorienting,” Bergmann recalls. “When I transferred to art school (at Cooper Union), I was able to focus and eventually discover sculpting. Now I understand how my Wesleyan courses in geology, British folk song, typography, and Shakespeare have enriched my life.”

View more of Bergmann’s work on her website, meredithbergmann.com.

Additional photos of the process are below: