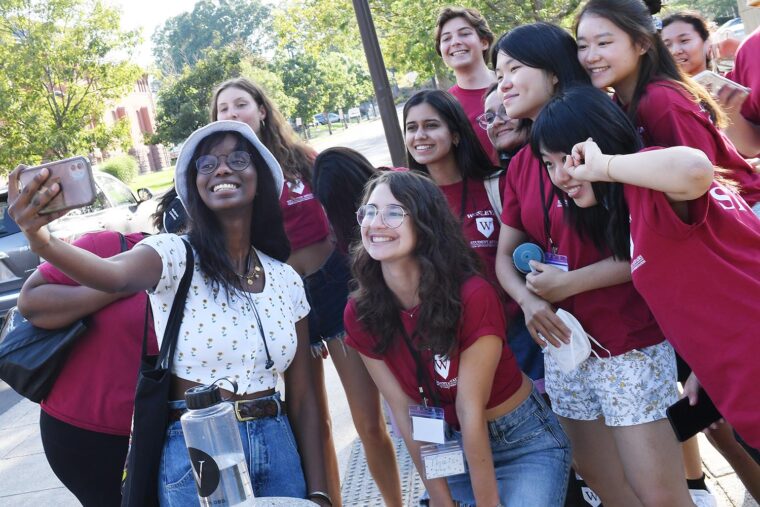 By definition, the term refers to a child who grows up in a culture different from the one in which his or her parents grew up. And Bennet Morales fits the description.

Born in Puerto Rico to Spanish and American parents, he moved to Paris at the age of 3, and to Barcelona 11 years later. After graduating from a French-speaking high school, he resided in Madrid, briefly, with his family.

And now, he’s among 392 international students studying at Wesleyan this fall.

“I was really interested in going to the U.S. since high school, especially looking for liberal arts schools due to the academic flexibility that it offers, as opposed to European universities that have more restrictive curriculums,” Bennet Morales said. “I toured several colleges around Boston, New York, and Washington D.C., and out of those I saw, Wesleyan was the one that felt most welcoming and sincere during the tours. I felt like Wesleyan could be one of my ‘homes.'”

Edvin Tran Hoac ’24 of Sweden began his Wesleyan journey remotely during the spring 2021 semester and is “super excited for classes to start,” he said. “I haven’t quite decided what I’m going to major in yet, but I’m really happy with my current schedule, which covers both my curiosity and academic interests.”

Before applying to Wes, Tran Hoac, who is a Davis International Scholar, was first impressed by the “lovely people” he met and the “beautiful campus” he encountered during a campus visit.

“I particularly liked that the university was known for being diverse and inclusive on top of being a top academic institution. These aspects, combined with the generous financial aid I was offered that made it economically feasible for me to attend, were the reasons I decided to come to Wesleyan,” he said.

“As the international cohort of the class of 2025, the ethnic, cultural, lived experience, and worldview diversity these students are bringing to Wesleyan is tremendous,” said Morgan Keller, director, Office of International Student Affairs, during his welcome message. “They will deeply enrich our campus community through their engagement inside and outside of the classroom during their journey as Wesleyan international students, or ‘Global Cardinals’ as I have taken to saying.”

For Diana Venus ’24, going to America to further her education was an unreachable dream. Coming from a low-income household in Kyrgyzstan, Central Asia, Venus had no support but her own. Through research and numerous internet searches, Venus ended up finding, and applying to Wesleyan.

“I really wanted to study anthropology and get involved in social activism, and I thought education abroad would better prepare me for life. I love my country and want to serve my community, and I know going to Wesleyan can give me necessary knowledge, skills and connections to work towards social change back at home,” she said.

When people ask Venus where she’s from, she proudly says Kyrgyzstan. “Most people either don’t say anything afterwards or say that they’ve never heard of it. Few actually make an effort to pronounce it right and ask questions, which I appreciate,” she said.

Bennet Morales, who now serves as an international student orientation leader for the Office of Residential Life, can relate to the campus newcomers. He was in their shoes just three years ago. He recalls the initial challenge to adapting to life at not only Wesleyan, but in the United States, and focusing all academic writing and reading in the English language.

International Student Orientation, a rigorous three-day program that explores the full range of academic and co-curricular opportunities available at Wesleyan, “played a big part in feeling welcome here, especially through meeting the international community,” Bennet Morales said. “I actually live this year with two of the people I met on the first few days on campus!”

The international students joined the regular New Student Orientation with the rest of the Class of 2025 on Sept. 1. Additional photos are below: (Photos by Olivia Drake)