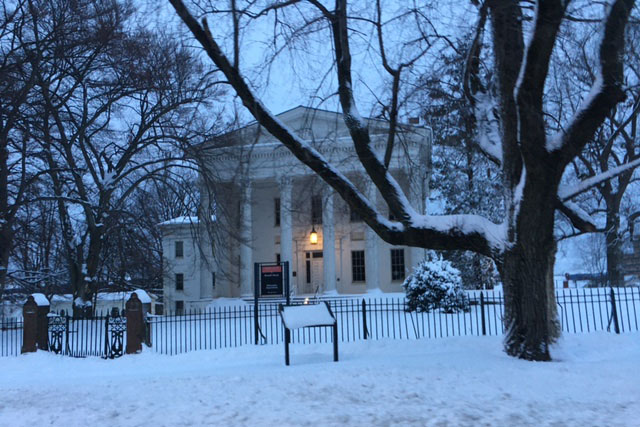 Margaret Salazar ’98 was appointed as the regional administrator of Region 10 for the Department of Housing and Urban Development (HUD), according to a White House press release. Region 10 serves Alaska, Idaho, Oregon, and Washington. “A national leader in affordable housing finance, Salazar previously served in leadership roles in HUD Headquarters, where she stewarded the Rental Assistance Demonstration and financed the recapitalization of hundreds of properties while safeguarding affordability for thousands of vulnerable seniors and families.” She currently serves in the cabinet of Oregon Governor Kate Brown and is Executive Director of Oregon Housing Community Services. (Jan. 13)

In Biz Journal, Bozoma Saint John ’99 shares the story of her career path that led her to becoming the chief marketing officer of Netflix. Saint John “reconsidered her medical-career goal after being inspired by an African-American studies class during her freshman year at Wesleyan.” (Jan. 15)

A chair crafted by the late John Risley Hon. ‘66, professor of art emeritus, appears on PBS’ Antiques Roadshow this week, according to The Connecticut Post. The chair is featured in three-part visit to Wadsworth Mansion in Middletown. Risley joined Wesleyan’s faculty in 1954 and devoted most of his teaching throughout his career to sculpture and the fundamentals of design. Risley received a Master of Arts ad eundem gradum in 1966. He died in 2002. (Jan. 19)

Jeanine Basinger, Corwin-Fuller Emerita Professor of Film Studies, speaks to CNN in a story titled “Marilyn Took the Male-Led Film Industry and Flipped It on Its Head.” Basinger mentions that Monroe’s appearance in Bus Stop was her opportunity to show off her acting chops. “We can see that Marilyn Monroe’s physicality is being treated differently from earlier movies. There’s a different quality to it. It’s more realistic. It’s less voyeuristic.” (Jan. 14)

On ABC’s season 13, episode 11 of Shark Tank, entrepreneur Raquel Graham-Crayton ’90 pitched her light-up headgear company, Roq Innovation. Graham-Crayton accepted an offer from Sharks Peter Jones and Kevin O’Leary for $200K for a 20% stake plus a royalty of $1 per unit until $600K is paid. (Jan. 14)

In Newsweek, Samantha Green Woodruff ’96 shares how she acknowledged her clinical anxiety disorder at the age of 41. “It turns out that we anxious people can trick ourselves into thinking that we can control things that are entirely beyond our control. It is a bit of a catch-22; we want to control to keep our anxiety in check but, often, the need to control is what creates the anxiety in the first place.” (Jan. 14)

Gillian Brunet, assistant professor of economics, discusses the history of price controls and inflation on NPR. In 1942, the Office of Price Administration announced that everything needed to stay at March 1942 prices. Brunet says this helped a little. “That gets the annual inflation rate down to, like, the 5- to 8% range, so kind of where we are now. They decide that even that is not enough. … The Office of Price Administration actually explicitly set prices—you know, went around and said charge X for this. Charge Y for that.” (Jan. 12)

Lin-Manuel Miranda ’02, Hon. ’15 , who celebrated his 42nd birthday on Jan. 16, credits his wife, Vanessa Nadal in E! News for being the “reason anything gets done.” Miranda has netted three Tonys, three Grammys and even a Pulitzer for his Broadway sensations In the Heights and Hamilton. (Jan. 16)

The New York Times shares the “Mini Vows” story of Herman “Stan” Parish IV ’06 and Anna Sánchez Bendahan in New York. After dating in New York and going their separate ways, they reconnected in Rome and rekindled their romance. “A graduate of Wesleyan University, Mr. Parish is the author of the novels Down the Shore and Love and Theft. (Jan. 18)

Wesleyan EMTs Livia Cox ’22 and Nick Wells ’21 are featured in The Middletown Press for working to reduce overdose deaths with a three-pronged, grassroots effort to equip those addicted to opioids with lifesaving tools. Cox and Wells are co-founders and co-directors of the Middletown Harm Reduction Initiative, a local, nonprofit organization launched in the fall 2019 that offers a syringe exchange program, twice-weekly resource distributions of safer-use kits, COVID-safety supplies and PPE and community education. (Jan. 18)

In a People Magazine article titled “How I Met Your Mother Cast: Where Are They Now?” actor Jason Segel is mentioned for playing the role of Marshall Erikson. In the show, Marshall was “roommates with Ted Mosby when they were college students at Wesleyan University.” Craig Thomas ’97 and Carter Bays ’97 co-creators the show. (Jan. 18)

In This Organic Girl, film studies major Emily Barth Isler ’01 discusses the use of natural ingredients vs. synthetic ingredients in the beauty/self care products. “Just because an ingredient is synthetically derived doesn’t automatically make it bad; but it might make it harder for the average consumer to evaluate.” (Jan. 11)

Retired teacher Jim Powers ’75, MALS ’88, CAS ’92 is featured in The Connecticut Post for overseeing the the Quinnipiac Dawnland Museum in Guilford, Conn. “As a kid playing in the woods, when my friends and I played cowboys and Indians, I had to be an Indian,” Powers said. “I was drawn to it. I found their culture, the little I knew about it, fascinating.” Powers took courses in Native American culture at Wesleyan University, where he majored in European history. (Jan. 5)

Santa Monica Daily Press reports that Liam Waldman will join Wesleyan’s Class of 2026 with a full-ride four-year- QuestBridge’s Match Scholarship. Waldman, who developed an interest in public policy while attending New Roads school in California, “now looks forward to deepening as a political science major at Wesleyan. At the same time he is pleased to be able to continue engaging with the visual arts and admires how the interdisciplinary philosophy at Wesleyan closely aligns with the teaching style he came to love at New Roads.” (Jan. 12)

Smile Politely reports that J. Kēhaulani Kauanui, professor of American studies, will be a panelist in the series “Making it Plain: Reckoning with Anti-Asian Racism.” The series is funded by the University of Illinois Chancellor’s Call to Action to Address Systemic Racism and Social Injustice Research Program. Kauanui will speak on “Articulating our Racist Present.” (Jan. 18)

The Hollywood Reporter shares an obituary of Donald A. Ramsey ’57, MA ’58, who served as an associate producer on the landmark 1977 mini-series Roots. He died at the age of 86. He also worked on the kids shows H.R. Pufnstuf, The Bugaloos and Lidsville for Sid and Marty Krofft. (Jan. 10)

Poet P. Scott Cunningham ’00 is mentioned in Broadway World for co-coordinating “I Dream a World: The Harlem Renaissance and Beyond,” a multi-disciplinary, multi-tiered festival held Feb. 1-5 that celebrates the history and influence of this cultural movement from the 1920s. Cunningham is the founder and director of O, Miami, a non-profit organization that celebrates Miami, Florida. (Jan. 7)

Meg Lyons ’80 shares her ideas on modernizing an 18th century stone home owned by Marcia Santoni ’83, P’25 and John Morris P’25 in Connecticut Magazine and The Stamford Advocate. Lyons, owner of Meg Lyons Architects, studied architectural history at Wesleyan. “I am at heart a modernist because I live in the 21st century, but at the same time, I have a love for the history of architecture and believe in honoring what came before,” she said. “Merging the historical and the modern together creates a sweet spot.” (Jan. 11)

Grace Overbeke ’08 is cited in All Events In for leading a discussion on “The Many ‘Mrs. Maisels’: A History of Jewish Women Comedians” on Jan. 20. Overbeke is an assistant professor in the Theatre Department of Columbia College with a focus on comedy writing and performance. She received her BA in theatre and English from Wesleyan. (Jan. 19)

The Provincetown Independent reports that Thomas Lyons ’26 is the recipient of a Vorse Fellowship. The Vorse Fellowship marks the third leg of a “gap year” that Lyons started by working in a tempeh factory near his hometown. He then spent two months working odd jobs and living at a youth hostel in London, England. “Next fall, he plans to start college, studying the humanities at Wesleyan University.”

According to Our Sports Central, the Kalamazoo Wings acquired Tyler Kobryn ’20 from the Atlanta Gladiators in exchange for future considerations. Kobryn played on Wesleyan’s men’s ice hockey team from 2017-2020. (Jan. 19)

The Hartford Courant reports that the University of Connecticut, Yale University, and Wesleyan are among the Connecticut universities delaying students’ return to campus amid omicron surge. In Middletown, the start of spring classes at Wesleyan will be delayed until Jan. 27. Classes that Thursday and Friday will be online, with in-person instruction slated to begin Jan. 31. “This will allow students to be tested for COVID-19 at Beckham Hall, and receive results, before they return to in-person learning.” (Jan. 5)

Nathan Mealey, associate university librarian for discovery and access, speaks in The Charleston Advisor on implementing Controlled Digital Lending (CDL). “Consortia are the ideal level at which to engage, collaborate, and govern a solution to facilitate CDL as a mechanism for interlibrary loan. Operating as a network of libraries and consortia will maximize impact and position the project for long-term sustainability and equitable growth.” (Jan. 13)

Charles Barber, associate professor of the practice in letters and nonfiction author, speaks about mental heath during the COVID era in an article titled “The View From Here” published in The Perch. (Dec. 21)

Wesleyan’s new tobacco- and vape-free policy is shared in The Hartford Courant and Yahoo! News. “This policy is intended to provide a healthy living, learning and working community. The policy will help to reduce health risks and reduce campus litter associated with tobacco use. This policy also helps to prepare individuals for careers, etc. in increasingly tobacco-free work environments.” (Jan. 19)