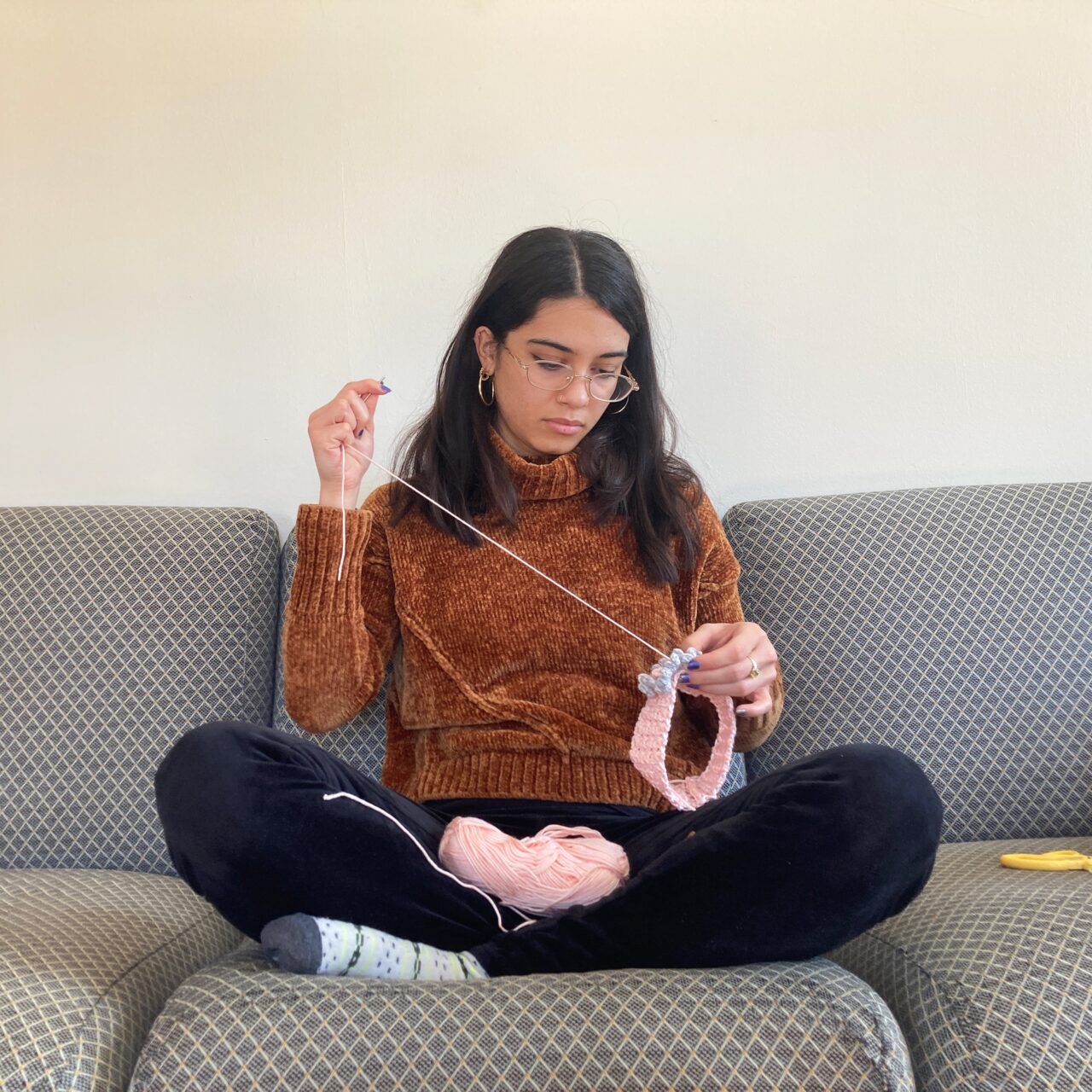 Ivanie Cedeño ’22, a lauded entrepreneur, remembers a metal container her grandmother, Eurania, used to have. Cedeño recalls how she would watch her sew.

“When she would put clothes away they were all pressed and everything had its spot, everything fit perfectly,” Cedeño said.

She is cautious about the precision of the memory, though. Perhaps her love for her grandmother has idealized her recollection. Cedeño’s startup, Sol Blossom Crochet, honors these memories. The company won first place at a presentation to Middletown’s Board of Commissioners, the final stage for a Startup Incubator class she took this fall.

Cedeño identifies as diasporriqueña, a member of the Puerto Rican diaspora. She has visited the house her dad built with his brothers, on a mountain face in Yauco, a southwestern part of the island. She could see, on the opposite face, what was left of her grandmother’s home.

In describing her grandmother, Cedeño says “her whole life had been taking care of people.” Her young siblings became her responsibility when she was only nine years old, and she made and sold gloves, socks, and underwear to support them. As calluses and storages of yarn built up, Eurania hid them both. While Cedeño was growing up, her grandmother warned her about developing calluses of her own. She wanted her granddaughter to be protected from manual labor like the hardened skin that protected her own palms.

While Eurania lived and worked on this mountain face in Yauco, Operation Bootstrap, presented as an adaptation of the New Deal, was implemented across Puerto Rico. Tax exemptions were offered to American conglomerates who, once established, drew labor from local industry. Industrial growth did not counteract the losses of those local industries, though. As garment factories outcompeted the home-needling economy, employment in both declined. In the 1970’s, Eurania moved to the United States.

Cedeño thinks about her position and identity within the Puerto Rican diaspora, which actually outnumbers the island population. “It wasn’t my choice where I was born, or where my parents moved to,” she said. Puerto Rican, Latinx, Hispanic, Borinqueña, American, Latin American, diasporriqueña, mixed, brown; the list and considerations go on for her.

Cedeño sees a theory that aligns with her own way of understanding herself and the remedies she hopes for the world around her. Solarpunk, a faction of the global futurist imagination, particularly interests her.

Around the same time that Ebola broke out in Western Africa and Russia annexed Crimea, Solarpunk was born in Brazil. The movement imagined jungles pouring out of glass structures that curved in defiance of physics. Technology and nature abounded mutually.

Solarpunk harnessed the fear of a climate disaster and oppressive technologies to form a new kind of global hope. This universal proposition, though, did not depend on a universal bureaucracy; Its punkness was anti-authoritarian and anti-consumerist.

Solarpunk made its way into Puerto Rico after Hurricane María devastated the island’s infrastructure. While neoliberal restructuring and privatization by mainland conglomerates keeps the island teetering on its reliance on electric generators, many Puerto Ricans have come together to grow and trade their own food.

When the United States colonized Puerto Rico, the economy shifted from small farming to large monoculture crops like sugar and coffee. For most small farmers the only option was to participate in wage labor. In the modern movement towards self-cultivation in the wake of catastrophe, Cedeño says Puerto Ricans are “reclaiming their land and knowledge.” It is very Solarpunk.

Cedeño balances the idea of a sustainable utopia and her memory of her grandmother while managing her crochet company, Sol Blossom Crochet.

Cedeño recently transitioned from acrylic to wool, natural and recycled fibers. Her business had to, first, grow to a point where it was economically feasible to invest in higher quality and more sustainable materials.

After factoring in labor and material costs, the prices of her products exceed something that her grandmother would have been able to afford. In a way, Cedeño says “the prices [she] charge[s] are an homage to her.” Customers that can’t afford her products can still receive inspiration from her fashion and entrepreneurship. They can also buy patterns as items themselves.

Cedeño believes in the beauty of her scarves, bags, and tops. “Everything should be art,” she said.

In terms of the fabrics themselves, she knows that they can serve regenerative decay or near-infinite useability, two dimensions of sustainable construction with ambiguous ideological overlap. She thwarts the capitalist illusion of finite material death.

Cedeño has a list of things that she is contesting with each stitch: colonialism, overconsumption, exploitation, and pollution, to name a few. “There is a vision, but also the knowledge that the vision may not be possible in your lifetime,”  Cedeño said.