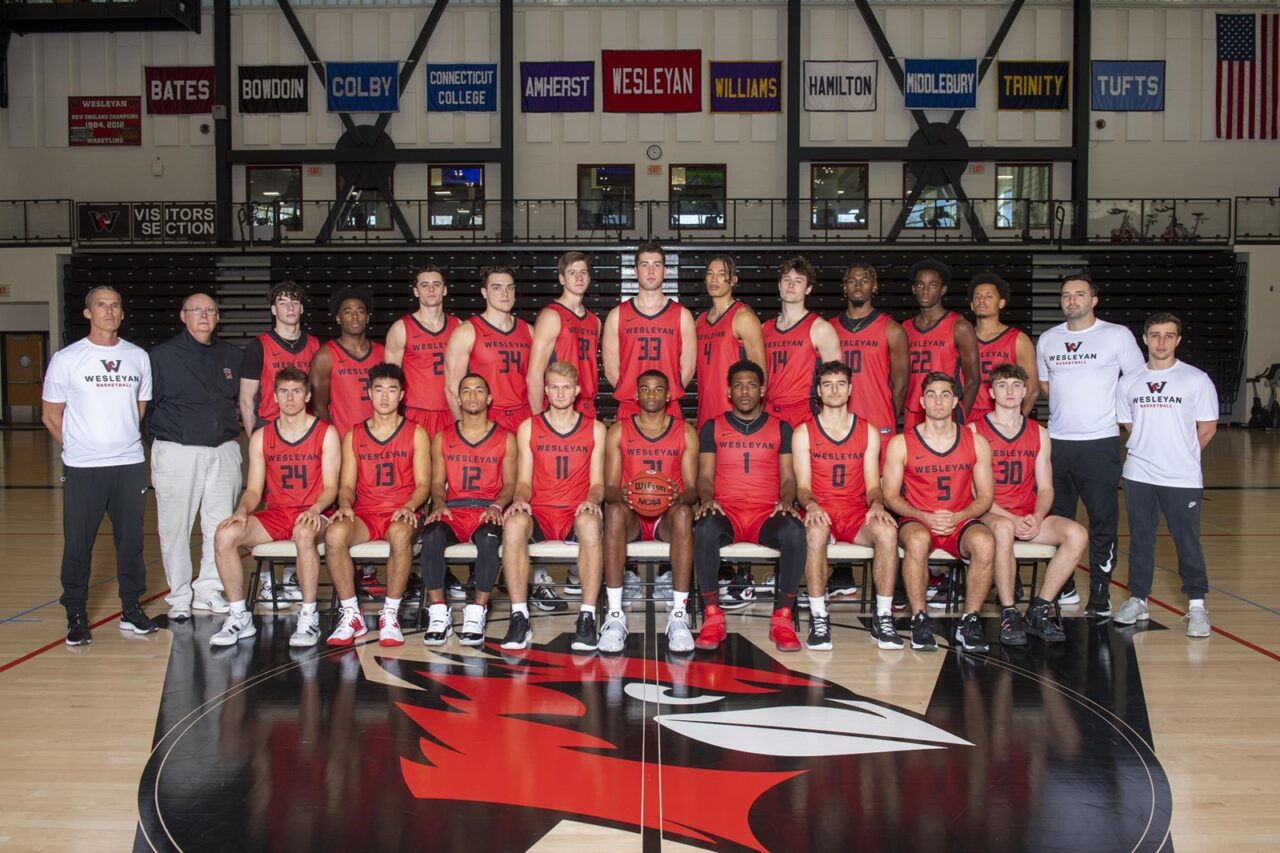 The men’s basketball team is in the midst of a prodigious season, having just matched the single-season wins record of 22. Currently, the team is just one win away from setting a single-season record, and for the first time ever, Wesleyan is the number 1 seed in the NESCAC Tournament. Silloway Gymnasium will be the host site of the upcoming NESCAC Championship weekend, with the Semifinals set for Saturday, Feb. 26 followed by the title game on Sunday, Feb. 27.

“This season has been amazing so far—it exceeded my expectations personally and team-wise,” Nicky Johnson ’25 said. “I enjoy every day of it and look forward to being around the team/coaches. Despite practicing and playing for nearly five months, the season has flown by.”

Head coach Joe Reilly explained that the team spent a lot of time when they couldn’t play during the pandemic planning for this season and strategizing ways to gain a competitive advantage.

“I think we have a lot of weapons offensively,” Reilly said. “And I think we’re hard to prepare for, and we’re hard to scheme against because we have different guys who can do different things.”

The men’s basketball team has a particularly large roster this year, with 20 players on the active roster. Often times the team dresses 18 for home games. Reilly added that the large number of players has proved to be an asset in winning.

“Our roster is much bigger than last year’s which we thought would be a challenge, but actually helped us in many ways,” Sam Peek ‘22 said. “Guys stepped up with big games when people had COVID.”

Peek also highlighted how excited the team is to be hosting the NESCAC tournament, especially after waiting so long to play together again.

“We talked about the season so much on Zoom last year and for all the work to pay off feels great,” Peek said. “I think our preparation has been the biggest contributor to our success. We’ve been talking about how we want to play and our expectations since our last season in 2018-2019. We’ve come a long way and worked incredibly hard to get to the point where we are right now. Everyone on the team has bought in and made sacrifices for the team.”

From player injuries to ever-changing COVID-19 restrictions, the team has constantly needed to adapt. Reilly underscored how hard all his players have worked this season despite the difficulties.

“Every season is a roller coaster,” Reilly said. “There are a lot of ups and downs, and we have a philosophy as a team that there’s adversity in every season. Sometimes there’s this illusion that when you have a great season, there’s no adversity, everything falls into place.”

Reilly added that the team’s success ties back into its core values, three of which are discipline, mindset, and team first.

“Our definition of success is not dependent on how we do in the postseason—our goal is to win the next game, and that’s going to be our focus,” Reilly said. “We’re not just building great basketball players here. We’re trying to build great men and great leaders in the community. And these four years are setting guys up for their next 40.”

Indeed, the team has grown both on and off the playing field, in skill and in their relationships with each other. Johnson emphasized how this closeness feels integral to the experience of playing basketball.

“I love being with my teammates every day and spending time with them,” Johnson said. “This has been one of the closest teams I’ve been on which I think in turn has also attributed to our success….I think from the upperclassmen down, everyone is close with each other and the older guys have done a great job welcoming us freshman in from the jump and serving as someone to turn to for any advice or guidance.”

Johnson added how wonderful it has been for the team to have a normal season.

“It has felt great being able to play, no mask, and a crowd watching,” Johnson said. “It had been over a year since I had a regular-ish season and I think it has made me realize how important the game is to me.”