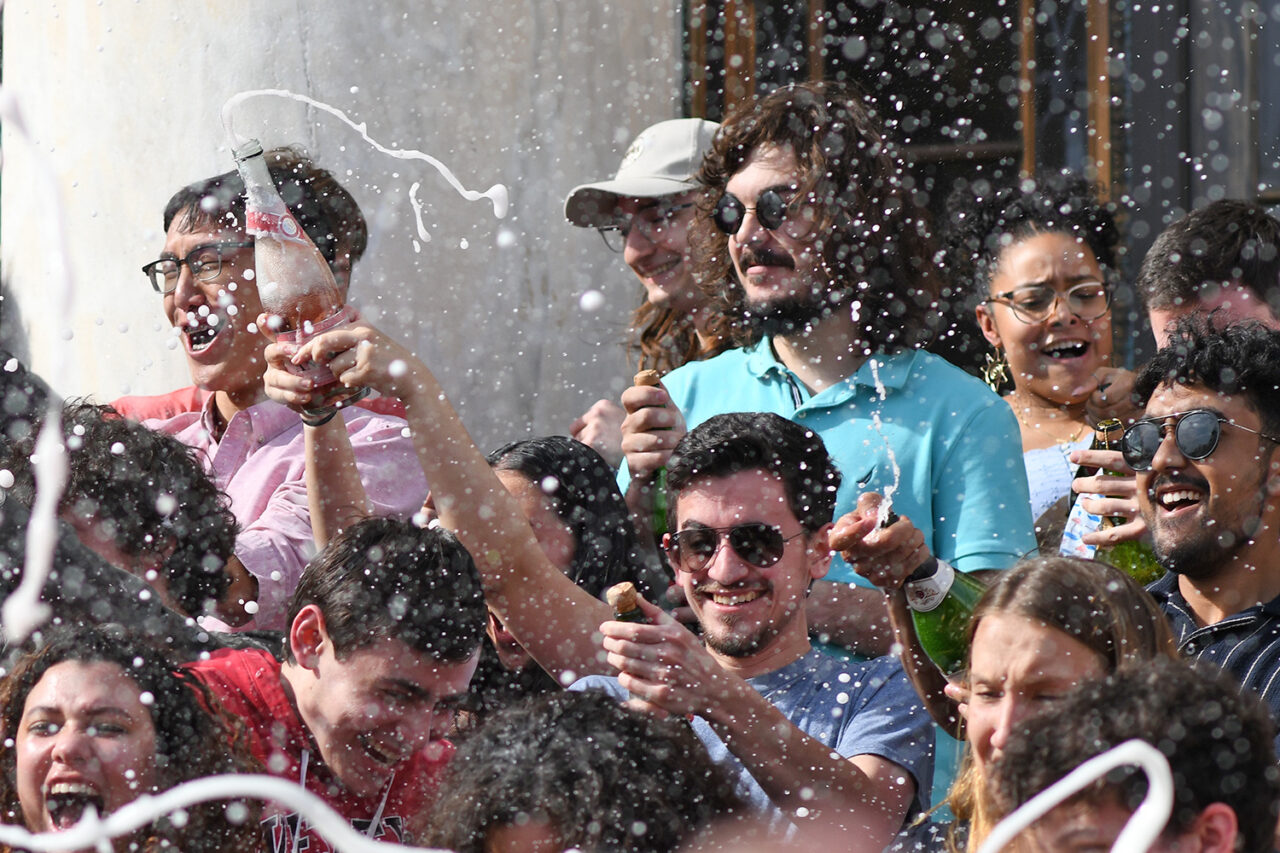 Ori Cantwell ’22 has been looking forward to this moment since his freshman year at Wesleyan.

On April 14, he joined dozens of his classmates on the steps of Olin Library to celebrate the completion of their senior honors theses—at a ceremony that included a champagne toast and accolades from friends and faculty advisors.

During this traditional festivity known as “Thesis Day,” the thesis-writers take turns popping bottles of champagne while their friends and faculty advisors congratulate them on their efforts. This year, 254 seniors pursued honors this year.

“The champagne toast was a blast,” Cantwell said. “And I learned that champagne really stings your eyes.”

Cantwell, a psychology major and religion minor will be graduating next May also with a certificate in applied data science. His honors thesis, titled “Infonation, or How Americans Imagine(d) the QAnon Movement” looks at QAnon as an infonation, or a political community that collectively imagines the nation in a virtual setting, taking a mixed-methods approach to analyzing the in-group dynamics of QAnon believers as they transform primary evidence into their truth. His thesis advisors are Maryam Gooyabadi, assistant professor of the practice in quantitative analysis and Justine Quijada, chair and associate professor of religion.

“Through my discourse analyses, I find that participating in QAnon online spaces empowers individuals to imagine the nation through an apocalyptic lens, and pay particular attention to why QAnon conspiracy theories stick with their believers,” he said. “I ultimately suggest that qualitative analyses can help produce more effective and nuanced quantitative models of conspiracy theory phenomena.”

Cantrell, who only started time-tracking his thesis work in January, says he spent between 18-20 hours on it a week since then. He has “no idea how many hours” he spent on it in the fall.

Honors theses provide students with a final opportunity to work on a big project that is entirely their choosing, all while having the support of an on-campus undergrad experience. Students who register their thesis with the Honors Program are eligible to graduate with honors in their major. Theses are currently being evaluated by Wesleyan faculty and students will know the results on April 28, according to Susan Krajewski, associate registrar.

“Completing an honors thesis is a big deal,” she said. “If they do receive High Honors or Honors, it prints on their diploma and they receive recognition in the commencement program.”

After a trip to the Museum of Modern Art, Annie Kidwell ’22 couldn’t stop thinking about the sculptures she had seen, which prompted questions about movement and body. This experience led to Kidwell, who is double majoring in art history and dance, to craft a joint thesis titled “Encounters: Constellations of Creation and Perception in the Sculptures of Auguste Rodin” under the guidance of her advisors, Katherine Kuenzli, professor of art history, and Hari Krishnan, chair and professor of dance. Along with writing the thesis, she choreographed two new works for the dance department.

“At the champagne reception, it felt so amazing to be part of that overwhelming release,” Kidwell said. “Everyone there put a lot of themselves into their research and the community celebration was so joyful! There were definitely some mixed feelings; I’ve spent eight months with Rodin and his sculptures, and it was hard to let go. I haven’t taken all my books back to Olin yet because I’m afraid of how empty the house will feel without them!”

Quentin Tan ’22, who is majoring in the College of Letters and the College of East Asian Studies, celebrated the completion of his honor’s thesis, titled “Transnational Longings, National Belongings: The Digital Responses of the Malaysian Chinese to the 2019–2020 Hong Kong Protests.” His advisors are Ulrich Plass, chair and professor of German studies, and Yu-ting Huang, assistant professor of East Asian studies.

His project required him to read more than 10,000 Facebook comments made by Malaysian Chinese during the 2019-20 Hong Kong protests which “were not only tiring but also masochistic in many ways, though I am glad at the analysis I have drawn from it and think that the whole grueling process paid off!”

Tan began his thesis during the fall semester of his sophomore year and estimates the entire project took about 300 hours in total. For this, the celebration was much needed. “I got soaked by the rain of champagne,” he said. “I shouldn’t have washed my hair before the ceremony, but I’m glad I went there.”

Ben Cowan ’22, a neuroscience and College of Integrative Sciences double major, says completing this thesis, “Interconnected Protein Networks: Insights Towards CRIB-Par6 Protein Allostery Through a Graph-Theoretic Analysis” was one of his biggest achievements. He began working on it his sophomore year under the guidance of Kelly Thayer, assistant professor of the practice in integrative sciences.

“I decided to write an honors thesis because I thought it would be a nice way to culminate all the research I had been doing in my lab into a single document. Additionally, I hoped that through writing a thesis I could learn along the way how all the different analyses I had been performing could mesh together into newly integrated understandings about the protein system I was researching,” he said. “I learned a lot about myself in the process and what I feel like I am capable of. I remember thinking about the idea of a thesis and whether or not I’d be capable of doing it, yet here I am now!”

Unfortunately for Cowan, his time at the champagne celebration was cut short.

“I was running on an hour of sleep at the time from finalizing the thesis and I sprinted to make it in time,” he said. “Once I popped the champagne and took a few sips, I actually had to sprint back to a lab class four minutes later in order to get to it on time so I didn’t have too much time to bask in the celebration.”

Photos of the Class of 2022’s honors thesis celebration are below: (Photos by Olivia Drake MALS ’08) previousMatteson '23 Takes on the Future In New Book