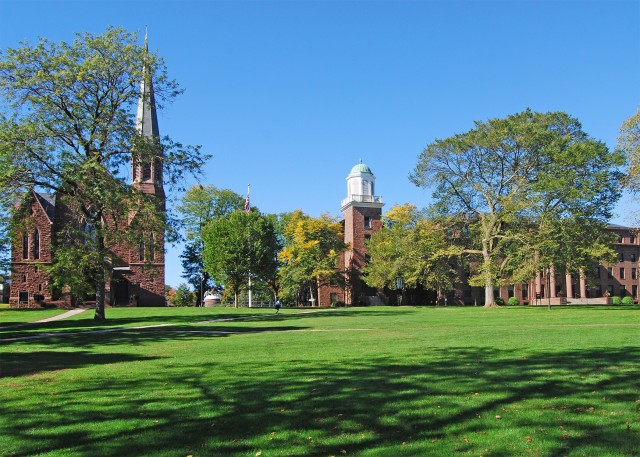 Maaza Mengiste, professor of English, has found that sometimes the scariest thing a writer can do is start over. It’s a hard-earned lesson she had to experience herself, but a vital one that she passes on to her students.

Mengiste believes that the benefits of a fresh start are immeasurable. It can be a period where ideas coalesce and, perhaps more importantly, experimentation begins. When asking her students to start over, “They would look at me with sheer terror,” she said. But eventually “they would come back with these spectacular pieces of writing. It was hard to convince them sometimes, but towards the end of the semester they would often start doing it,” she said.

Learning to be a risk-taker was something Mengiste learned the hard way. Over a five-year period she wrote an entire draft of a novel about the Second Italo-Ethiopian War. In the end, she made the decision that it wasn’t the book she wanted to write. “It wasn’t the story I imagined it could be,” Mengiste said. Much to the chagrin of her editor and agent, she cast it aside and started over. “I started to move away from the research I’ve done to ask myself, what am I really interested in in the subject of war? What I’m really interested in is the way memory works,” she said.

A decade after she began writing the epic tale of a young woman defending her home in Ethiopia, Mengiste’s 2019 novel The Shadow King helped her win a prestigious Guggenheim Fellowship. The award was announced in early April. “This novel made me feel pity and fear, and more times than is reasonable, gave me goosebumps,” said Namwali Serpell in her New York Times review of the novel.

She is currently working on her next project, which explores the relationship between German Expressionist painters and their Black models from the 1920s through the 1940s and what happened to them when the Nazis came to power.

Mengiste didn’t believe that The Shadow King would get the reception it did, including being shortlisted for the 2020 Booker Prize. “I was ready for complete failure in terms of the critics and the public, but I thought there might be a select few readers that would appreciate what I did and that I would want to be in conversation with them,” Mengiste said.

As she worked on the book, Mengiste shared her difficulties with her students. They knew when she was experimenting and working through her revisions. She talked about work that inspired her and ideas she wanted to try. She created right alongside them, demonstrating that a creative life is always changing and that one idea or misstep could feed the next moment of inspiration.

“I’ve learned that being in risky territory for me just takes time. I can’t move into a new space right away. I have to do it in increments. I keep pushing and I try something and eventually something begins to break free,” Mengiste said.

She’ll often ask while she’s writing, what else can I do with this moment? How can I push it? It’s an exciting process, Mengiste said, and one that can be laden with joy despite the tremendous difficulty. “I think as writers we’re supposed to always be serious, always wearing the tweed jacket in a dark room, but there should be joy there. You will be able to feel it in the sentences that there is another kind of energy beneath the words. That comes from the writer,” she said.

There were days when the joy was hard to find – she said she experienced instances of sincere dejection during the process. As time went on and the new form of The Shadow King began to take shape, Mengiste began to feel differently. She began to say publicly in interviews that she was not afraid to fail. She might have used the press as an outlet, but those words were directed at herself. “I wanted to affirm and confirm for myself that it wasn’t about anything except writing the story. You have to push yourself to the precipice. It is the only way to grow,” Mengiste said.