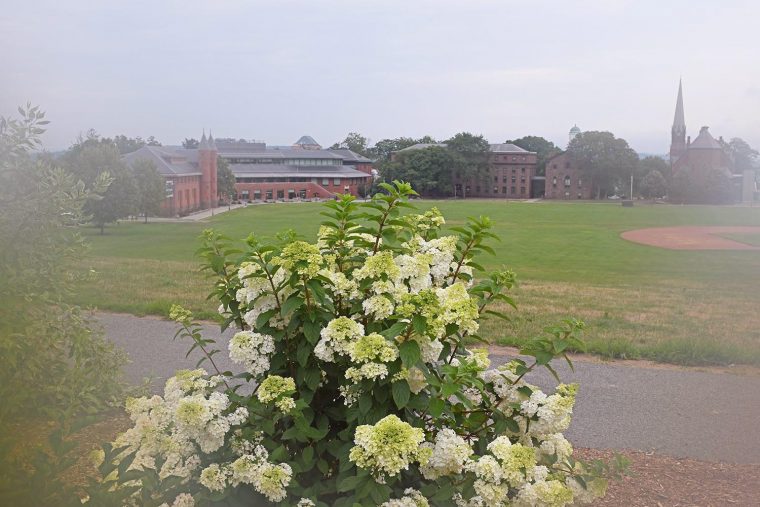 In The Conversation, Benjamin Elling, assistant professor of chemistry, explains why Bisphenol A, or BPA, is so widely used to make plastics, despite its reputation for causing adverse health effects. Elling, a synthetic polymer chemist, says BPA-derived polycarbonates “are transparent, incredibly strong, light, and don’t begin to melt or lose structural integrity until they reach high temperatures.” Polycarbonates, he says, are a ubiquitous part of modern life. “A major concern with designing new plastics is that swapping out BPA for another molecule may not get rid of the negative health effects. Just as the chemical structure of BPA determines the properties of the material, the structure is also what triggers the negative biological effects.” (June 23)

In Slate, Hannah Docter-Loeb ’22 interviews “How I Met Your Mother” co-creator Carter Bays ’97 about his new novel The Mutual Friend. “I wanted to write something new. I wanted to write something that really pushed me in a direction I hadn’t gone before, but at the same time, I tried to use the skills that I had and had developed over the years of writing ‘How I Met Your Mother.’ There’s a lot of mysteries in the book. There’s a lot of traps that get laid and sprung on the reader 100 pages later.” (June 24)

Nora Markey ’23, a 2022 summer fellow at The Providence Independent, explains how she enjoys developing a sense of place wherever she is. “I think that starts with seeking a deeper understanding of hidden histories, ecologies, and politics. “I grew up spending a week here [on Cape Cod] every summer. But since arriving for this fellowship two weeks ago, I’ve learned of tensions surrounding affordable housing and of worries about preserving the picturesque houses and hills.” (June 22)

According to The Patch, Community Health Center, Inc. (CHC) honored U.S. Senator John W. Hickenlooper ’74, MA ’80, Hon. ’10 with the inaugural Peace and Health Award. This award is given to an individual who, “through public or private service, has fostered the proposition that health care access is a fundamental human right and who has been a force promoting community and civic engagement to solve pressing social problems.” (June 21)

In All Events In, director, Peabody and Emmy nominated producer and writer Angela Tucker ’96 is mentioned for leading a discussion about “Reproductive Justice on Film.” Tucker was producer of Belly of the Beast, which was broadcast on PBS’ Independent Lens and was a New York Times Critics’ Pick. As founder of TuckerGurl Inc, a boutique production company in New Orleans, Tucker “is passionate about stories that highlight underrepresented communities in unconventional ways.” (June 23)

In Poynter, Gary Yohe, Huffington Foundation Professor of Economics and Environmental Studies, Emeritus, suggests that the U.S. should pursue policies that promote fossil fuel alternatives in response to high gas prices. Such alternatives, he says, would “undermine autocrats’ abilities to use money from around the world to fund their oppression at home and extracurricular aggression abroad,” and “promote the environmental health of the planet and benefit the public good.” (June 17)

In Inside Higher Ed, Wesleyan President Michael Roth ’78 writes about higher ed’s role in a culture war. “‘Culture war’ is an apt name for this kind of base scapegoating—and much more. When online groups target an individual or an organization about some inappropriate use of language—that, we are told, is ‘culture war.’ The widely discussed silencing of speakers and the loudly bemoaned self-censorship on campuses (and everywhere)—that, too, is said to be ‘culture war.’ (June 1)

In The Institute of Art and Ideas News, Lori Gruen, William Griffin Professor of Philosophy, argues that abstract reasoning alone is not enough to motivate us to behave morally. Gruen discusses her view of “entangled empathy”—a process that refocuses our ethical and political attention on what we care about—our relationships. “Most of us think about our actions when they impact those with whom we are in relations, and when we are being especially thoughtful we will reflect on our dependencies and our obligations in those relations as well.” (June 8)

Andrew Curran, William Armstrong Professor of the Humanities, co-authored (with Yale Professor David Jackson) a feature article in Brazil’s Folha de S. Paolo on the writer-philosophers Denis Diderot and Machado de Assis and the importance of freethinking in a democratic society. (June 14)

Dominic Squatrito ’61, the late federal district judge cherished as a vigorous advocate of civil rights and equality, is cited in Yahoo! News for having the Manchester High School swimming pool named in his honor. At Wesleyan, Squatrito was a fullback and co-captain of the football team. (June 21)

In The Conversation, Royette Dubar, assistant professor of psychology, explains what leads college students to ghost others, and if ghosting has any impact on mental health. Ghosting happens when someone cuts off all online communication with someone else, and without an explanation. Instead, like a ghost, they just vanish. The phenomenon is common on social media and dating sites, but with the isolation brought on by the COVID-19 pandemic – forcing more people together online – it happens now more than ever. (June 16)

In the wake of the May 24 shooting in Uvalde, Texas, Elise Springer, associate professor of philosophy, suggests that the word “evil” is of the most complex and paradoxical words in the English language. In a Conversation piece, published on June 9, Springer explains that many people “know evil” when they see or feel it. “If there’s any good occasion for using the word, surely a planned massacre of vulnerable children seems an uncontroversial case. Still, this commonsense approach doesn’t shed much light on how the idea of evil influences public attitudes,” she writes. (June 9)

“Effective action toward the eradication of gun violence must be based on understanding what is wrong in our system and then we can work to fix it,” writes Professor Emeritus of Psychology Karl Scheibe in a recent Hartford Courant op-ed. “The problem here is lack of will—a fatal weakness for our social fabric. Let us first believe that this can change.” (June 9)

Yahoo! Sports reports that New England Patriots Head Coach Bill Belichick ’75, Hon. 05, P’07 “turned back the clock” to play center for quarterback Mac Jones at a Patriots minicamp. “Belichick has experience at the center position, having played center and tight end at Wesleyan University during his college days. Despite his experience, it is doubtful he is going to lace up the cleats and leave the sidelines anytime soon.” (June 7)

On Marfa Public Radio, Helen Poulos, adjunct assistant professor of environmental studies, speaks on a broadcast titled “Fescue Rescue: An Endangered Grass Embodies the Beauty, and Fragility, of the ‘Sky Islands.'” Poulos has studied forest ecology in the borderlands of Texas and Mexico for two decades. “One of the most rewarding things about the project is working truly as this binational team,” Poulos said. “I’m on What’s App all the time with my Mexican collaborators. Both on the Mexican side and the U.S. side, we both feel really cool about this international collaboration.” (June 2)

In the South Floria Reporter, Frank Gunderson MA ’91, Ph.D ’99 is commended for devoting much of his life to music. The Florida State University professor also is a noted “teacher, a world traveler, a composer, an author, and a filmmaker.” (June 7)

Erika Franklin Fowler, professor of government and director of the Wesleyan Media Project speaks to WTNH about elections misinformation in Connecticut. (June 2)

Mark Masselli Hon ’09, P’15, ’16 and Wesleyan are featured in a new video that celebrates the history and 50th anniversary of the Community Health Center. (May 31) The celebration also is featured in The New Haven Register. (June 2)

In the Colorado Springs Business Journal, John Hazlehurst ’62 shares an op-ed about online civl discourse. “Remember the nascent days of Facebook? I was an early adopter, amused by Mark Zuckerberg’s appropriation of a treasured college memory. When I began my freshman year at Wesleyan University in Middletown, Connecticut, I soon realized that I was ill-suited to life in an all-male college in a dreary New England town. Please, Lord — where can I find a girlfriend?” (June 3)

In MV Times, Harvey Garneau Jr. ’77 shares an op-ed titled “A Flag of Many Colors,” which is about growing up gay in the 70s and how he met his partner, Dan Waters ’77 at Wesleyan. “In addition to a well-rounded liberal arts education, I came away from my four years at Wesleyan University with the nickname ‘Hal,’ and with Dan Waters. Freshman year we were both rooming in the same dorm on separate floors. We met, became close friends, grew inseparable, fell deeply in love, and have been together ever since. Finding that perfect person with whom you know you want to spend the rest of your life is challenging under the best of circumstances. Being gay during that period in history, this became exponentially more difficult. Anyone growing up gay and reaching adolescence in the 1970s knew that, because of the not-so-subtle hatred and bigotry toward them, it was prudent to keep their sexuality hidden as best they could.” (June 1)