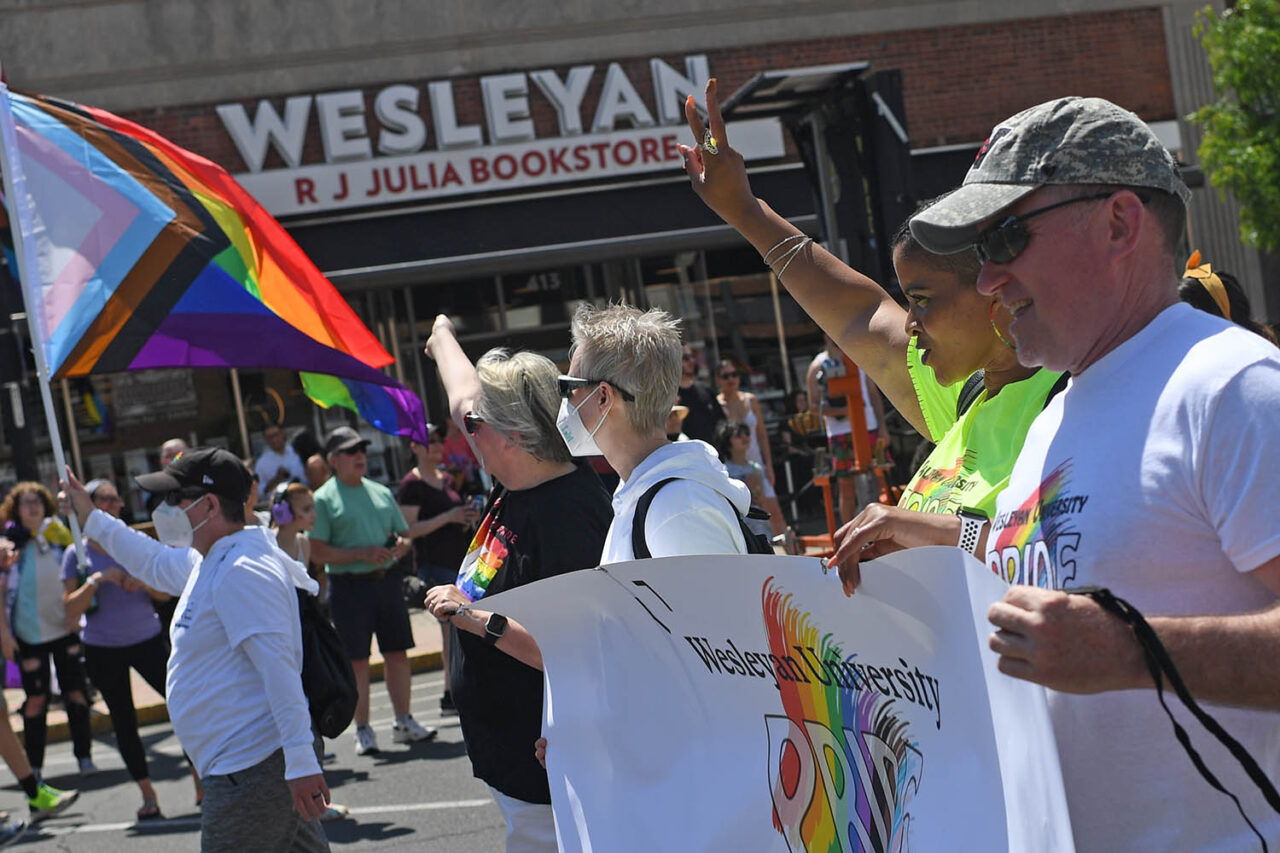 Growing up in a religious and conservative town in Colorado, it wasn’t easy being a gay kid.

Now 29 and a PhD candidate in biology, Zachary Drum—who identifies as a gay cisgender male—is hoping to garner public support for LGTBQIA2S+ equality so youth nowadays can find pride in who they really are. (LGTBQIA2S+ is an acronym for Lesbian, Gay, Bisexual, Transgender, Queer and/or Questioning, Intersex, Asexual, Two-Spirit, and other ways in which people choose to self-identify.)

On June 4, Drum joined a cohort of fellow Wesleyans for the City of Middletown’s fourth annual PrideFEST, which included a Pride parade and rally, a street fair, entertainment, and multiple concerts. He also marched in the inaugural parade in 2019.

“Being a part of the Pride celebration has been really important for me throughout the last decade,” Drum explained. “Luckily things have gotten a lot better for cisgender gay people, and especially being at Wesleyan and in Connecticut, my identities afford me a huge amount of privilege. Unfortunately, that is not the case for trans and non-binary people, especially trans and non-binary people of color.”

This year, Drum marched in solidarity with his trans and non-binary neighbors and colleagues and reflected on how far he’s come personally.

“I hope the Middletown Pride event gave all LGBTQIA2S+ people a safe space to be who they are with their community,” Drum said. “I also hope others use Pride to acknowledge that we have such a long ways to go for gender and sexual equality. The more people who publicly support LGTBQIA2S+ equality, the easier it is for [these] kids to be comfortable and proud of who they are.”

As someone who remembers participating in Pride marches in the ’80s, Michael Whaley, vice president for student affairs, found the Middletown parade to be a similarly memorable experience. Whaley proudly marched, carrying the Wesleyan University Pride banner with three colleagues.

“Our Middletown community is making progress on better recognizing and celebrating the diversity that makes us strong and vibrant,” he said. “Similarly, our queer community is more fully embracing the diversity within our own ranks. It was a joyous and heartwarming day, and I was so pleased to spend it with the Wesleyan contingent.”

PrideFEST is jointly coordinated and sponsored by the City of Middletown, the Middlesex County Chamber of Commerce, and Wesleyan University. In 2018, the City of Middletown formed an LGBTQ advisory committee to work on the inclusion of Middletown’s lesbian, gay, bisexual, transgender and queer/questioning residents, and the festival is a result of these efforts.

“Middletown’s PrideFEST is a chance for us to celebrate and honor the diversity within our community,” said Alison Williams, vice president for equity and inclusion and Title IX officer. “We welcome people of all identities and are committed to breaking down barriers that prevent people from being their authentic selves. We strive to be as inclusive as possible not only in our campus community but as global citizens.”

Additional photos of PrideFEST are below and in this Wesleyan Flickr gallery. (Photos by Olivia Drake) previousWesleyan in the News, June 2022