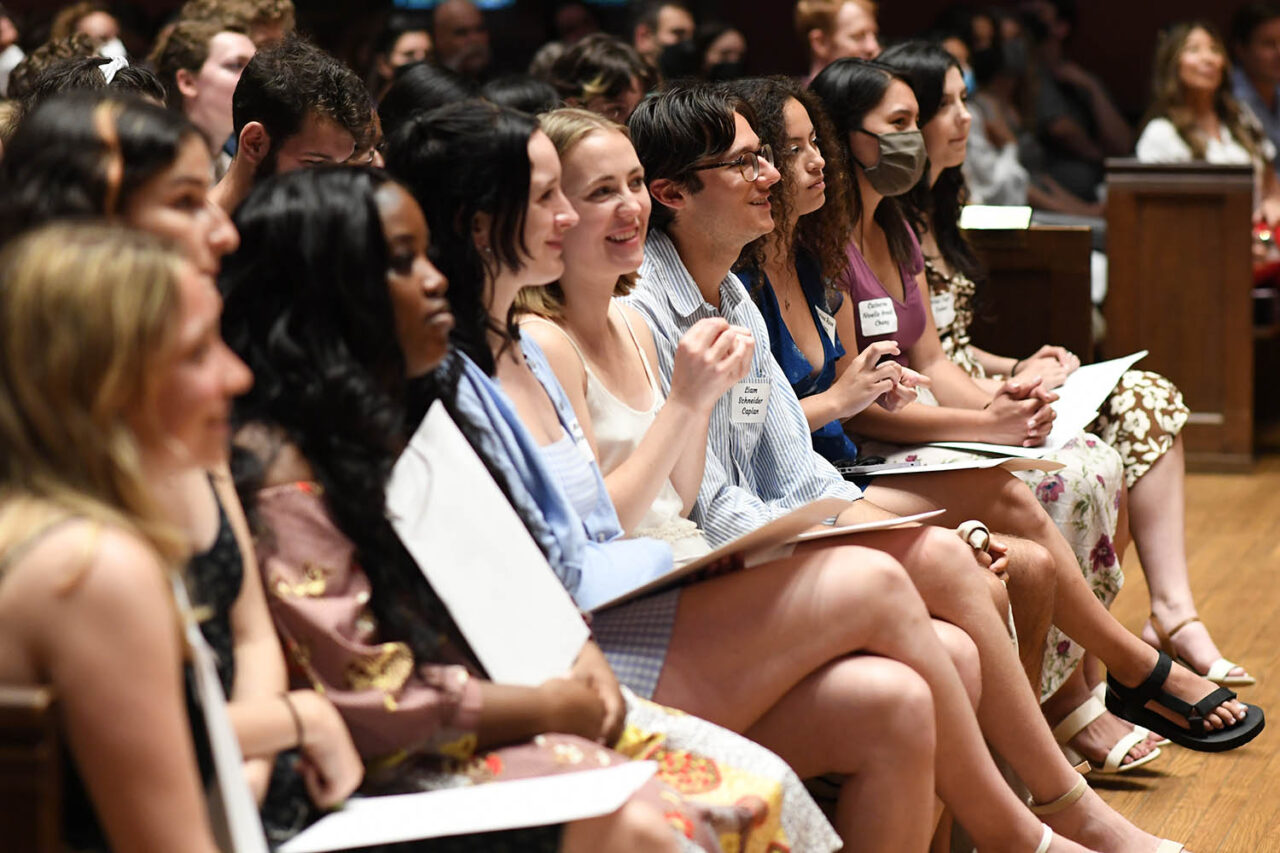 When Dr. Andrea Grubb Barthwell ’76 arrived on campus the summer of 1972, she was in the second full class of women admitted to Wesleyan. “I chose to become educated in a place that was undergoing change,” she said. “One principle that guides my life is, embrace change, it is inevitable.”

Barthwell, who delivered the keynote address during the Spring 2022 Phi Beta Kappa initiation ceremony, graduated with a degree in psychology and went on to founding the health care policy firm Encounter Medical Group and directs Two Dreams, a comprehensive alcoholism and addiction treatment system. She previously served under President George W. Bush’s sub-cabinet in the Office of National Drug Control Policy (ONDCP), where she was a principal advisor on policies aimed at reducing the demand for illicit drugs.

During the ceremony, Barthwell spoke to a fully-occupied Memorial Chapel filled with 79 Class of 2022 PBK inductees and their exuberant family and friends. Phi Beta Kappa, the oldest scholastic honor society in the nation, is limited to 12% of the graduating class at Wesleyan each year. They join 15 other seniors elected during the 2021 fall semester.

“You represent intellectual diversity and you are uniquely prepared to imagine a future for us,” Barthwell said. “You are uniquely qualified to solve a problem that we cannot at this point name or describe. Your preparation with a liberal arts education, your curious spirit, and your love of lifelong learning—coupled with your good and moral character—enables you to care for others in selfless ways. This will help you create and innovate our future.”

To be elected to Phi Beta Kappa, a student must demonstrate curricular breadth by having met the General Education Expectations; have been nominated by the department of his or her major; and achieved a grade point value of 93 or above.

Barthwell elaborated on the idea of “wisdom” during her speech, and noted that the students capacity for wisdom has grown exponentially since arriving on campus. “It parallels brain maturation, peaks at age 25 and starts its slow decline to senility. Wisdom gives us the capacity for innovation and judgement allows us to balance immediate needs with a long-term perspective.”

Of the 79 new PBK initiates, 12 are also student-athletes.

“We’re thrilled to see the induction of our varsity student-athletes into Phi Beta Kappa,” said Wesleyan Director of Athletics Mike Whalen ’83. “We’re certainly proud of their work on the field but their excellence in the classroom is just another example of how our student-athletes excel in all phases of their Wesleyan experience.”

“I was so impressed by the variety of interests, academic research, creative practice and extra-curricular shown by the students — and often that variety was found in each of the inductees,” Roth said.

Wesleyan’s newest Phi Beta Kappa inductees and their majors include:

“Election to membership is a great honor, but you are not just being elected into a mere honor society where your name is recorded in a great ledger and never looked at again. Election stimulates energies in each of you to do something,” Barthwell concluded. “PBKs do not rest on their laurels, you continue to act honorably and comport yourselves as you tackle the problems of your days- never being pedantic, arrogant, full of self-conceit, or satisfied. You aspire, with reverence and humility, because you have 1) academic depth and breadth, 2) independence of spirit, 3) curiosity, and 4) are of good and moral character.”