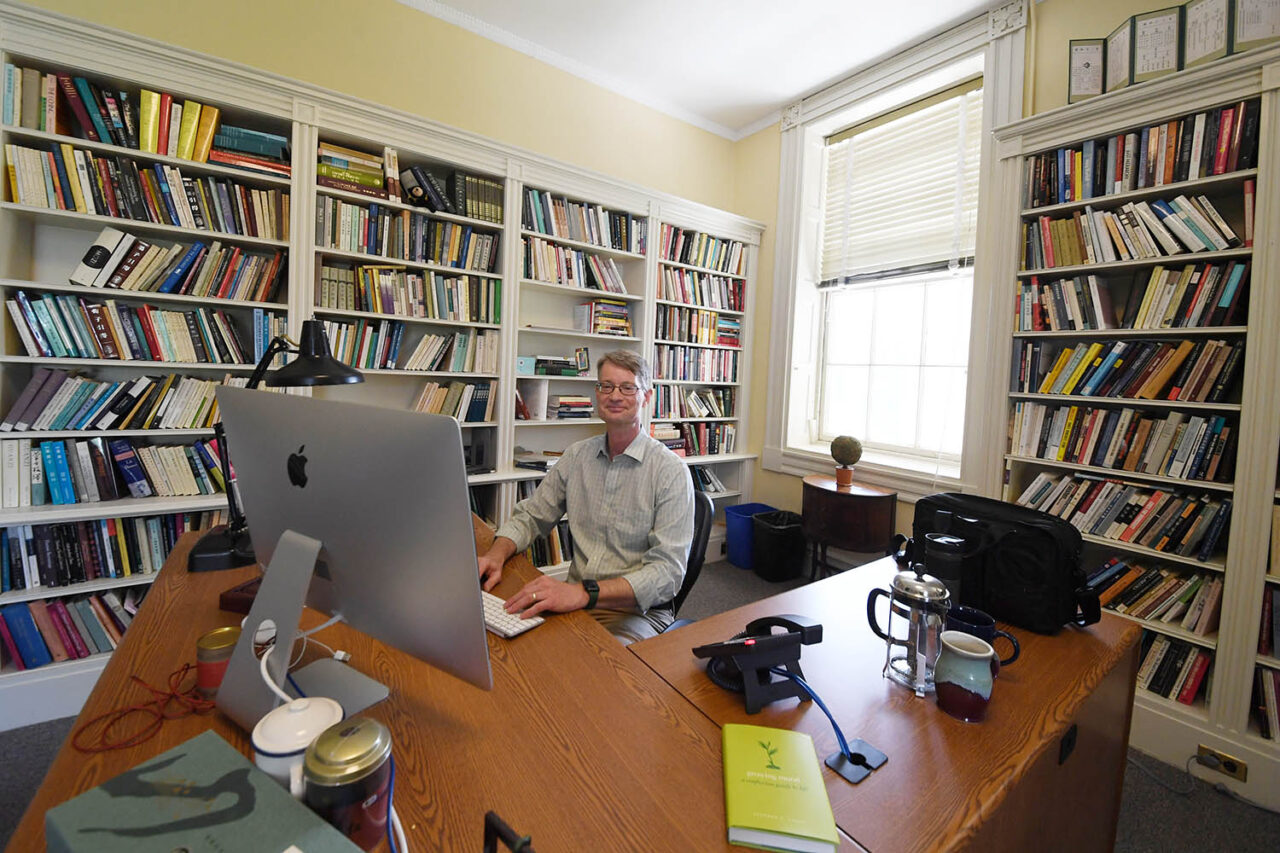 It was sitting in the peace of synagogue with his wife where Stephen Angle began to contemplate his personal relationship to Confucianism.

Angle, Mansfield Freeman Professor of East Asian Studies and professor of philosophy, had spent his career studying the ancient philosophy, which emphasizes personal ethics and morality. He’d written multiple academic books on the subject. The roots of his interest went all the way back to high school with a fascinating class on non-Western cultures. Still, there had always been one small remove between the ideas and his own life.

“I didn’t understand the Hebrew being chanted. Half of the time I didn’t really know what was going on, and as an atheist I didn’t even regret not following the God-stuff. But the general structure of the service was clear. The way it explicitly brought individual morality and social commitment together with spiritual beliefs: these rituals were the way in which we paid attention to how we get along with one another,” Angle said. “Once that revelation hit, it opened things up.”

The rituals of his father’s death in 2015 also prompted a new level of contemplation and engagement: “Then there was the quiet voice in my head – an occupational hazard of philosophers, perhaps – asking ‘Why?’ I wasn’t questioning what we were doing, all of which felt right, but I could not help thinking about why these emotions and rituals seemed both apt and important,” Angle wrote in the introduction to his new book Growing Moral: A Confucian Guide to Life, published in late March by Oxford University Press as part of its “Guides to the Good Life” series.

Through this self-reflection, the seeds for his newest book were planted. “Over the years I’ve come to realize that I identify as a Confucian. It is a way that my scholarship and life gradually came to reflect one another,” Angle said.

(Listen to Angle speak about his new book in this Philosophy as a Way of Life podcast from June 10.)

Each chapter of the book addresses a central Confucian recommendation – be filial, follow rituals, read the right way, listen to the right music, reflect regularly, pay attention, and be engaged. The book also discusses how to measure progress by examining some of the major life events that every human being experiences. “It is really about our lives,” Angle said.

Angle admits that touting the relevance of a 2,500-year-old philosophy often mistaken for an ancient religion can be a tough sell – the final section of the book examines how the philosophy balances against present-day concerns.

Confucianism can be patriarchal in tone and hierarchical in execution. Yet, Angle believes that the 21st-century iteration of the philosophy has answers to those important questions. Philosophy is reasoned reflection on the biggest questions about our lives and our world, Angle writes, and can evolve with the times.

“One of the key things about the book is that it is not just describing historical Confucianism, it’s about putting the ideas into practice in the contemporary world,” Angle said. “It’s not some sort of dead tradition. It’s not just something in a museum for us to look at. It is something that is alive and progressing in response to new challenges.”

Confucians stress the importance of focusing on that which can be controlled and what contributes towards our growth as moral beings, Angle said.

“Those are things that we can actively work on no matter what else is happening. There’s a lot of stuff we can’t control at the moment – for graduating students, it could be the job market. The number one thing is recognizing that you have some control over the kind of person you are,” Angle said. “These are the things that matter more to your flourishing and your happiness.”

His goal with the book is to encourage people to have more agency in their own lives. Confucianism asks that each person do their best every day, working with one another to make a better society.

“We should play a role in directing our own lives to make them better, not just to be passive and just assume that whatever society is telling us right now is successful is the best thing to do. And that maybe some of the ideas that the Confucians have to offer us on how to do that are also good ideas,” Angle said.