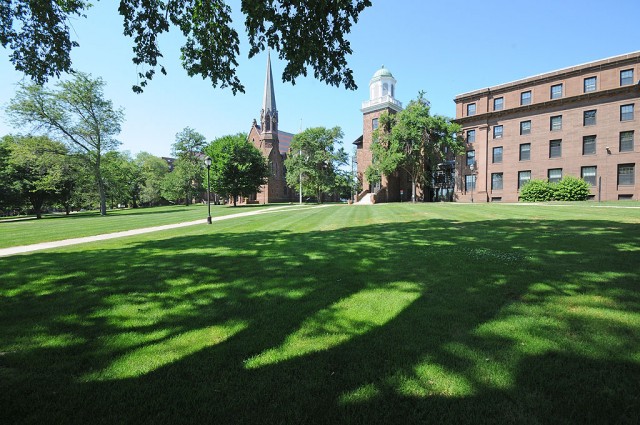 While most universities value either pedagogy or scholarship, Associate Professor of Biology Joseph Coolon appreciates how—at Wesleyan—both are celebrated concurrently.

“Wes is a truly unique place,” he said. “Wesleyan faculty aim to be true scholar-teachers with each benefiting the other synergistically.”

Coolon, who joined the Wesleyan faculty in 2015 as an assistant professor of both biology and integrative sciences, has since co-authored 13 articles on ecological and evolutionary genomics in peer-reviewed publications such as G3: Genes | Genomes | Genetics; Developmental Biology; and Insect Molecular Biology. Ten of these papers were co-authored by both his graduate and undergraduate students. Together, they specifically explore how insect pests evolve mechanisms to become resistant to insecticides.

He has received numerous grants, including a National Institutes of Health Research Enhancement Award for his work on information flow through gene regulatory networks. He teaches courses on Principles of Biology, Genetics and Genomics, Evolution, and Genomics Analysis.

“I love Wesleyan both for the amazing colleagues and for the incredible students I get to work with every day in my courses and in my lab,” Coolon said.

On July 1, Coolon, along with Gabrielle Piedad Ponce-Hegenauer, associate professor of letters, and Felipe Ramírez, associate professor of mathematics, will celebrate a major milestone in their academic careers. At their most recent meeting, Wesleyan’s Board of Trustees conferred the three faculty with tenure, an academic appointment that grants them a permanent position at the University.

“My two favorite professional moments are 1) the moment when you see a light bulb turn on in a student when they understand something they have been struggling with and 2) the moment when you discover something that no other person has ever known while doing scientific research,” Coolon said. “And to be at a place where I get the opportunity to possibly do both every day is something that makes my ‘job’ the coolest job on the planet. Now that I have tenure I am excited to continue to do what I love for many many many years to come.” (Read more about Coolon in this past Wesleyan Connection article.)

Gabrielle Piedad Ponce-Hegenauer, who joined the Wesleyan faculty in 2016 as an assistant professor of letters, is a specialist in Renaissance and Early Modern Literature whose research interests include the theory of the novel, Renaissance philosophy, poetic theory and practice, and contemporary phenomenology, with a specialization in the Spanish author, Miguel de Cervantes. Her first book, Cervantes the Poet: The Don Quijote, Poetic Practice and the Conception of the First Modern Novel (forthcoming, Cambridge University Press) revaluates the rise of the novel in 16th-century Spain through the relationship between lyric, novel, and romance in the works of Cervantes and his contemporaries. She co-teaches College of Letters colloquia and Great Books Unbound, and teaches College of Letters seminars on madness, love, and Renaissance women. (Read more about Ponce-Hegenauer in this past Wesleyan Connection article.)

Felipe Ramírez, who joined the faculty in 2015 as an assistant professor of mathematics, is a mathematician whose research focuses on ergodic theory and dynamical systems, fractal geometry, and metric number theory with a particular emphasis on Diophantine approximation, which attempts to discover the extent to which one can use rational numbers to approximate irrational numbers. His research has been published in Advances in Mathematics, Mathematical Proceedings of the Cambridge Philosophical Society, Mathematika, Nonlinearity, Journal of Functional Analysis, Journal d’Analyse Mathématique, and International Journal of Number Theory. Ramírez offers courses on Probability Theory, Real and Complex Analysis, Fractal Geometry, Metric Number Theory, and Calculus. (Read more about Ramírez in this past Wesleyan Connection article.)

“I’m extremely grateful to be awarded tenure at Wesleyan. It’s an enormous privilege,” Ramírez said. “The past seven years at Wesleyan have been some of the most rewarding of my professional life, both in research and in teaching. My colleagues are fantastic, and the students here are dedicated and creative.”

Norman Danner, professor of computer science
Professor Danner is a computer scientist whose research focuses on techniques for analyzing the source code of programs in order to determine their behavior during execution. Within this field, he seeks to formalize methods used in practice to evaluate the time and storage required to run programs as well as how to design programming languages that adhere to set limits on resource usage. He has received funding for his work from the National Science Foundation. He teaches courses on Programming, Data Structures, and Programming Language Implementation.

Roger Mathew Grant, professor of music
Professor Grant is a musicologist with expertise in the history and theory of 18th-century music. His recent book, Peculiar Attunements: How Affect Theory Turned Musical (Fordham, 2020), draws connections between 18th-century ideas about the capacity of music to trigger emotion in the human body and modern-day affect theory. His work has been published in Critical Inquiry, Music Theory Spectrum, Representations, and the Journal of Music Theory. His first book, Beating Time and Measuring Music in the Early Modern Era, won the 2016 Emerging Scholar Award from the Society for Music Theory. He offers courses on Tonal Harmony, Theory and Analysis, Baroque and Classical Music, and Queer Opera.

Anthony Ryan Hatch, professor of science in society
Professor Hatch is a sociologist whose interdisciplinary research raises broad questions about the social, scientific, and technological worlds that converge around human health and health inequalities. In his recent book, Silent Cells: The Secret Drugging of Captive America (Minnesota, 2019), he documents the use of psychotropic drugs for captivity and pacification in prisons and argues that this threatens basic human and civil rights. He was elected as a Hastings Center Fellow in 2021, and he was awarded the 2021–2022 Robin M. Williams Distinguished Lectureship Award from the Eastern Sociological Society. He offers courses on Metabolism and Technoscience, Cultural Studies of Health, and Sociology of Knowledge.

Christine Kemp, adjunct associate professor of physical education
Professor Kemp is head coach of field hockey. She arrived at Wesleyan in fall 2019, inheriting a team that had experienced seven consecutive losing seasons. Since then, the team has made significant improvements, with the highest single-season wins since 2012 and the most NESCAC wins in a single season since 2013–including one versus Trinity College, who advanced to the NCAA Final Four. She has developed an All-NESCAC and NFHCA Senior All-Star, and has recruited 14 players in the past two years. Professor Kemp serves as a Strength and Conditioning Coach for all Wesleyan sports teams and she teaches Interval Training, Beginning Fitness, Outdoor Hiking, and Advanced Olympic Weight Training.

Robert Lane, professor of molecular biology and biochemistry
Professor Lane studies the development of olfactory sensory perception in mice to understand how the identification of certain odors make life functions possible, including activities such as navigating, eating, and mating. He has received over $4 million in grant funding for his research from the National Institutes of Health and the National Science Foundation, and his work has been published in Chemical Senses, Molecular and Cellular Neuroscience, PLoS One, Journal of Neuroscience, and Genome Research. Professor Lane offers courses on Principles of Molecular and Cell Biology, Genetics and Genomics, Gene Regulation, and Research Frontiers.

Marc Longenecker, associate professor of the practice in film studies
Professor Longenecker focuses his teaching on connecting high-level film analysis with complex and nuanced questions. Deeply involved with community outreach, he coordinates the Summer Film Series, the Russell Library Film Series, and works with the Middletown Commission on the Arts, and he oversees the Wesleyan Film Series. He is also responsible for the operation, repair, and maintenance of all the advanced technology in the projection booths. Professor Longenecker launched a Teaching from the Archive program with a series of seminars that utilize the Wesleyan Cinema Archives, such as courses on the cinema of Frank Capra and Elia Kazan, helping to integrate the archives into the curriculum.

Louise Neary, adjunct professor of Spanish
Professor Neary has been teaching elementary and intermediate Spanish at Wesleyan for almost two decades. She works with her students to help them improve their Spanish while also striving to make the learning of a second language an immersive and transformative experience. With her rich teaching experience and interest in pedagogical innovation, Professor Neary serves as an important mentor to other faculty in the Department of Romance Languages and Literature. In addition to courses in elementary and intermediate Spanish, she offers courses on Linguistics and Second Language Acquisition and Pedagogy.

Richard Parkin, associate professor of the practice in film studies
Professor Parkin is a filmmaker whose work has been screened at the Los Angeles County Museum of Art, Los Angeles Film Festival, and Palm Springs ShortFest. At Wesleyan, his goal is to challenge students to create immersive and emotional cinematic experiences for their audiences. He is known for his friendly, engaging, and rigorous courses, as well as his skill in making filmmaking accessible and achievable for all students. Professor Parkin teaches introductory filmmaking courses on both 16mm and digital and also advises thesis film productions. He co-runs the Film Production Workshop, which provides practical knowledge of filmmaking to first- and second-year students.

Anna Shusterman, professor of psychology
Professor Shusterman is a developmental psychologist whose research focuses on the development of cognition in early childhood, particularly how children develop their concepts of number and spatial relations, and how this development is linked to linguistic abilities. She has received over $3 million in grants from the National Science Foundation, including a CAREER Award, and her work has been published in Proceedings of the National Academy of Sciences, Cognition, and Developmental Science. Professor Shusterman teaches courses on developmental psychology, research methods, education studies, and language and thought.

Benjamin Somera, adjunct professor of physical education
Professor Somera is the head coach of volleyball. His team competed in the past four NCAA Volleyball Championships—the only NESCAC volleyball team to do so—and in fall 2021 advanced to the Sweet 16 for the second time in team history. His NESCAC regular season record is 26-4 and during his tenure at Wesleyan, he has elevated the team from the bottom of the NESCAC to one of the premier Division III volleyball programs in the country. Team members have received numerous conference, regional, and national honors as both athletes and scholars. Professor Somera teaches physical education courses on Hatha Yoga.

Kelly Thayer, associate professor of the practice in integrative sciences.
Professor Thayer is a computational molecular biophysicist with expertise in the biological implications of molecular dynamics, which involves simulation and modeling of protein interactions. She has received grant funding for integrative machine learning and molecular simulation to do drug design for cancer research from the National Institutes of Health. She facilitates students and faculty with using computational resources on campus, including the high-performance computing cluster and runs workshops on subjects including neural networks and machine learning, data visualization, and software-specific boot camps. Professor Thayer offers courses in the fields of computer science, physical chemistry and molecular biophysics, and biological sciences.

nextClass of 2020 Alumni Receive a Perimeter Tour of the Renovated PAC, Art Gallery