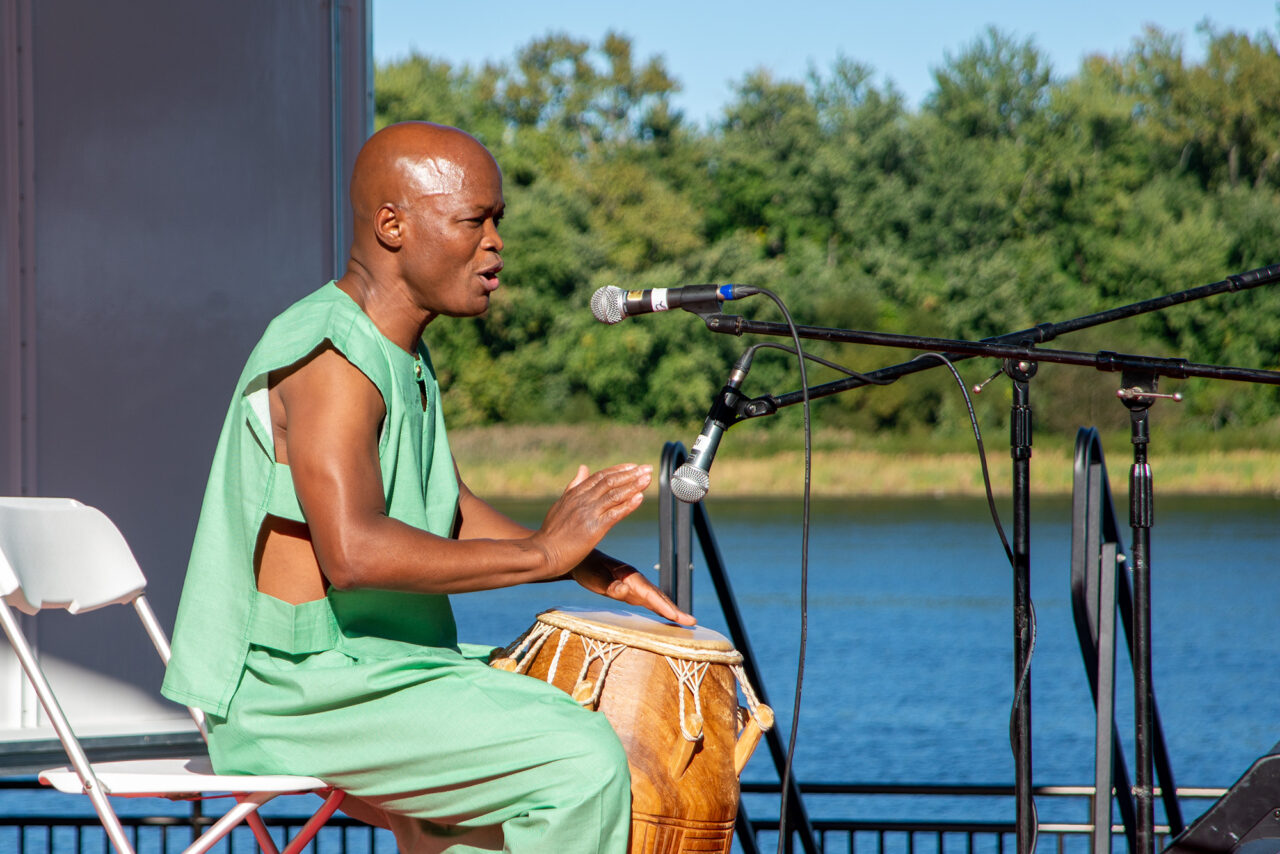 In addition to the speakers and arts and crafts, performers were needed. That’s when Rani Arbo, Campus and Community Engagement Manager, Wesleyan Center for the Arts, stepped in to help.

“As soon as we heard about this special Community Day, we had to be a part of what this stood for,” Fine said.

The day began with African drumming, speeches by local dignitaries, and solemn words from Gary O’Neil, Wangnuk descendent on whose lands Middletown and Wesleyan were built. Next was the ship’s flag raising, and then community day events could begin.

The transition to the celebration started with multi-percussionist Jocelyn Pleasant and The Lost Tribe’s Afro-funk fusion. As the music changed the mood, people began moving, laughing, and enjoying the company of all who’d come to be a part of the history and community.

When Saaka took the stage alongside the Connecticut River, he performed the history and dances of his native Ghana. He incorporated storytelling, explaining how Ghanaian families use dance and song to pass information to younger generations. His ability to reach younger generations was apparent when he invited the children in the audience to join him, and the joy of the moment was infectious.

“I feel very honored to be invited to perform at the Amistad event which looks at the history of slavery. [My performance] kind of takes us back to before people were brought here. They have a life connected to communal life where music and dance were integral to their life,” he said.

Celebrating the life people had before they were enslaved makes the story fuller and adds the context of the existing culture before Europeans arrived, he explained.

The day’s final performance infused energy into the crowd and provided the perfect ending. Joya Powell’s Afro-Brazilian dance students took the stage, dancing to an Afro-Brazilian beat that pumped up the crowd into one of those moments that feels magical, with waves of energy moving between those on stage to those in the audience, and back again.

The students invited the audience to join them, and they did – including Saaka, whose vulnerability in trying to keep up with the Afro-Brazilian movements was charming and encouraged audience members to try to keep up, as well. By the end, tired folks who’d been there all day were suddenly energized and filled with a spirit of spontaneous connection.

“It is a phenomenal joy to see students share what they learned in the dance studio. To hear them describe the history of the dance and dance it out with the Middletown community makes me proud that they really understand what these dances are all about. I am very grateful that Rani Arbo and Kisha Michael, Middletown’s Arts & Culture Coordinator invited us to be a part of this important day,” Powell said.

“It’s great to be back with my Afro-Brazilian dance buddies in the Middletown community, and cool to see and be a part of this day,” Peña said.

“It was so much fun to get up there with the students. There needs to be more of this, which is what I always wanted when I was at Wesleyan,” Zoe Farnsworth ’21, dance teacher, said.