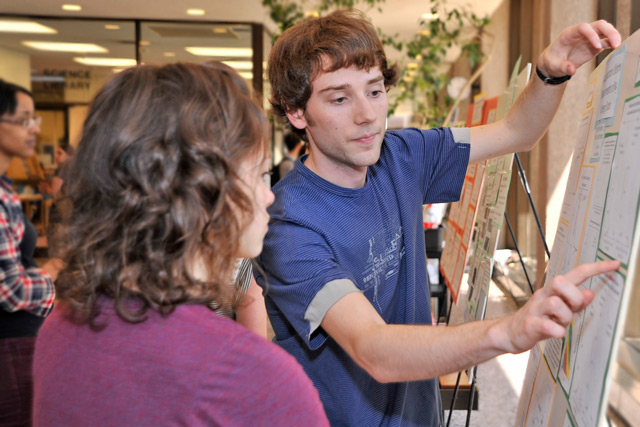 Fifteen Wesleyan students presented posters on their research in the sciences and mathematics at the seventh annual “Celebration of Science Theses” event held April 19.

“You help keep our sciences here vibrant and alive,” Ishita Mukerji, dean of natural sciences and mathematics, professor of molecular biology and biochemistry, tells the students gathered in the lobby of Exley Science Center as she congratulates them. Mukerji says she hopes that after pausing to celebrate their achievements, the students will continue to pursue research for many years to come.

The work presented by seniors and BA/MA students spans a wide range of disciplines. For his project, Micah Wylde ’12, a computer science major, developed algorithms for self-driving cars, like the cars reportedly being developed by Google. The algorithms translate high-level navigation goals (eg. Drive from home to the grocery store) into actual turns of the steering wheel. “I was working particularly on safety, which is a big deal when you have one-ton cars hurtling down the road,” he explains.

Wylde says self-driving cars are no longer the stuff of science fiction. “Everything has come together in the last five years—algorithms, sensing technology,” he says. “Now it’s just refining it.”

He adds, “In the next decade, there are going to be autonomous cars on the road—no question.”

Tom Oddo ’12, a Science in Society Program major, studied the work of D. D. Palmer, who founded chiropractics at the turn of the 20th century. Oddo plans to train to be a chiropractor after graduation, and sought to explain the stigma attached to the practice.

Oddo uses a philosophy of science lens to examine Palmer’s ideas and how he taught them. He finds that the American Medical Association rejected chiropractics because it was based in vitalistic philosophy—the idea that there is a supernatural driving force for life—rather than the dominant paradigm of evidence-based medicine.

Oddo concludes that chiropractics is a legitimate practice that should be limited in its reach to non-invasive healing of the musculoskeletal system.

Jad Donato ’12 presented his poster, “A Pilot fMRI Study of the Effects of Cognitive Remediation on Brain Activation Associated with Working Memory in Patients with Schizophrenia.” The study focuses specifically on working memory, which he explains, “possesses profound deficits in patients with schizophrenia and is resistant to standard antipsychotic medications along with other cognitive dysregulations.”

Working with data from five patients at the Institute of Living at Hartford Hospital, Donato finds that cognitive exercises do indeed have an effect on brain activity over time. Areas that are typically underactivated—such as in the middle frontal gyrus—showed increased activation, while deactivation was observed in areas that may reflect an increased efficiency in completing the working memory task during the response phase. Donato explains that his findings augment a relatively under-published field in schizophrenia research. “The promise of using cognitive remediation therapy in the future as a tool to curb cognitive decline and increase quality of life in patients with schizophrenia cannot be understated,” he says.

For her thesis, Alexandra Truebenbach ’12 studied the connection between black holes and their host galaxies, and found something unexpected.

“We expect that the two co-evolve together, like a symbiotic relationship,” she says. It has been thought that large galaxies are formed when two smaller galaxies merge together. But by using a computer program to analyze images of galaxies, she finds this wasn’t the case for some galaxies, suggesting galaxies can grow larger in a different way.

Truebenbach says she plans to turn her work into a professional paper over the summer, and submit it for publication.

More photos of the poster session are below: 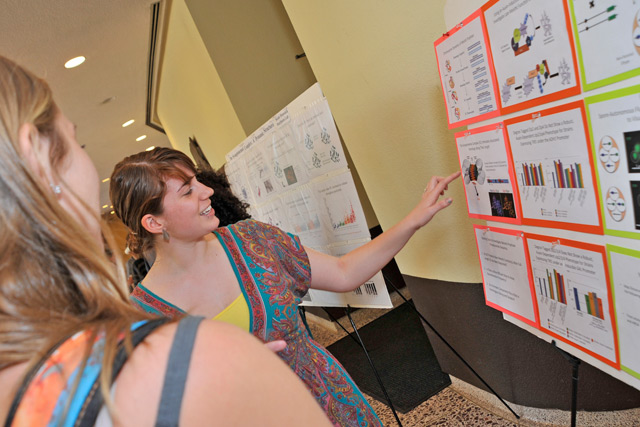 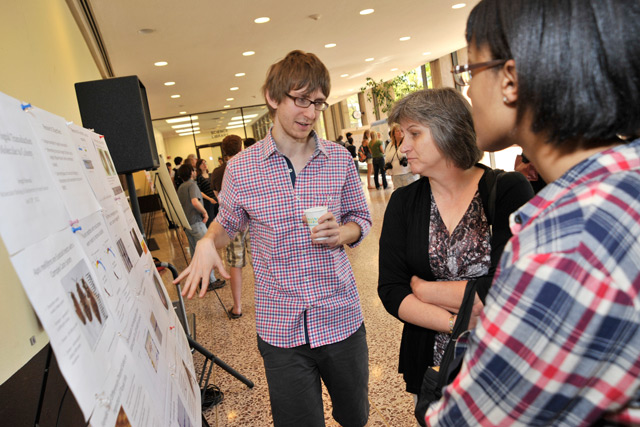 BA/MA student Sergei Pourmal '12 speaks about his research on "Royalactin: Signal Transduction from Molecule to Colony." 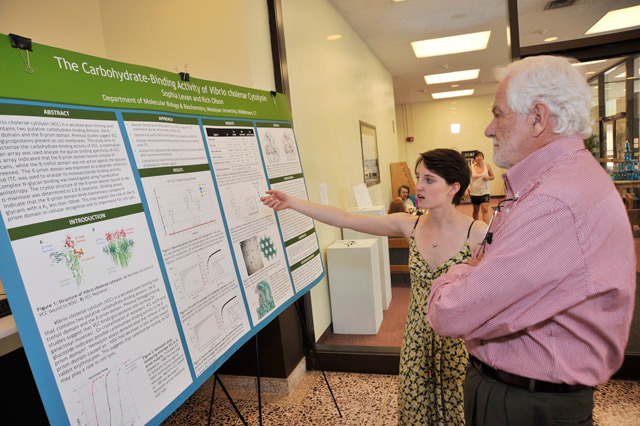 Sophia Levan ’12 explains her research on “The Carbohydrate-Binding Activity of Vibrio Cholerae Cytolysin" to David Beveridge, the Joshua Boger University Professor of the Sciences and Mathematics, professor of chemistry. 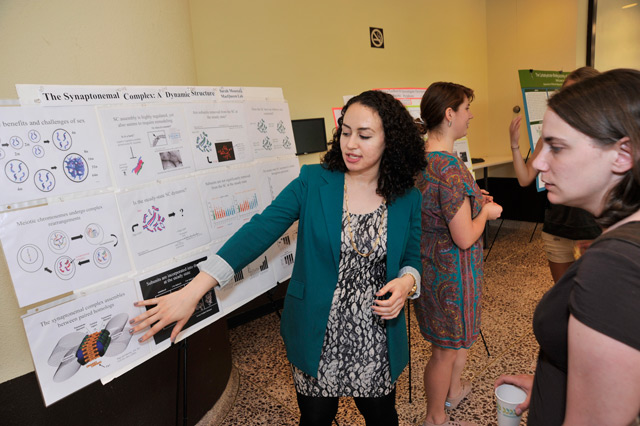 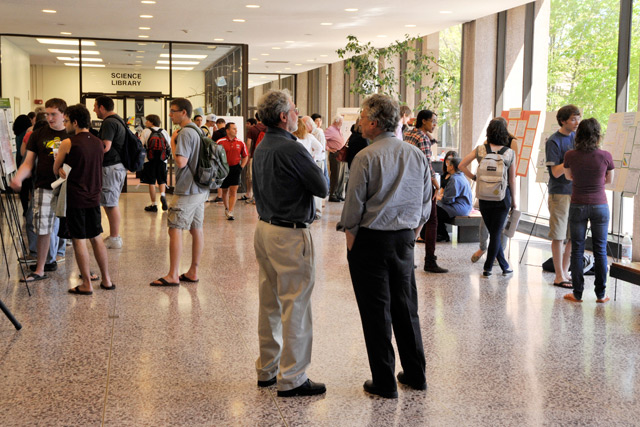 The entire Wesleyan community was welcome to attend.