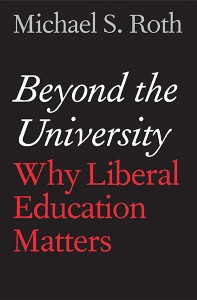 In connection with the release of his new book, Beyond the University: Why Liberal Education Matters, Wesleyan President Michael S. Roth has new op-eds and interviews published about the value of a pragmatic liberal education.

Writing in The New York Times, Roth warns against education that overemphasizes critical deconstruction of literature, art or other material. He writes:

Of course critical reflection is fundamental to teaching and scholarship, but fetishizing disbelief as a sign of intelligence has contributed to depleting our cultural resources. Creative work, in whatever field, depends upon commitment, the energy of participation and the ability to become absorbed in works of literature, art and science. That type of absorption is becoming an endangered species of cultural life, as our nonstop, increasingly fractured technological existence wears down our receptive capacities.

Roth calls upon students to allow themselves to be absorbed in compelling work, and consider how they might find inspiration, meaning or direction through it.

Roth also had an op-ed published in The Boston Globe on “The Case for a Liberal Education.” In an age when pundits continually question whether the cost of a college education is “worth it,” and undergraduates behave like consumers, Roth argues against notions that non-monetized learning is wasted or worthless. He writes, “The bartender with a chemistry degree is the contemporary version of the Jeffersonian ideal of a farmer who reads the classics with pleasure and insight, or John Dewey’s image of the industrial worker who can quote Shakespeare. For generations of Americans, these have been signs of a healthy republic.”

The willingness today by some to limit higher education to only certain students or to constrict the college curriculum to a neat, instrumental itinerary is a critical mistake, one that neglects a deep American tradition of humanistic learning. This tradition has been integral to our nation’s success and has enriched the lives of generations of students by enhancing their capacities for shaping themselves and reinventing the world they will inhabit. Since the founding of this country, education has been closely tied to individual freedom, and to the ability to think for oneself and to contribute to society by unleashing one’s creative potential.

The pace of change in American higher education has never been faster, and the ability to shape change and seek opportunity has never been more valuable. Our rapid search engines can only do so much: If we want to push back against inequality and enhance the vitality of our culture and economy, we need pragmatic liberal education.

Roth also was interviewed recently in The Atlantic  about his book in an article titled “There’s Nothing Liberal about Specializing in Philosophy.” He muses on what Thomas Jefferson and Ben Franklin would think about the state of higher education today; economic inequality and access to a college education; liberal versus vocational learning; and the power of a liberal arts education to expand horizons and transform world views.