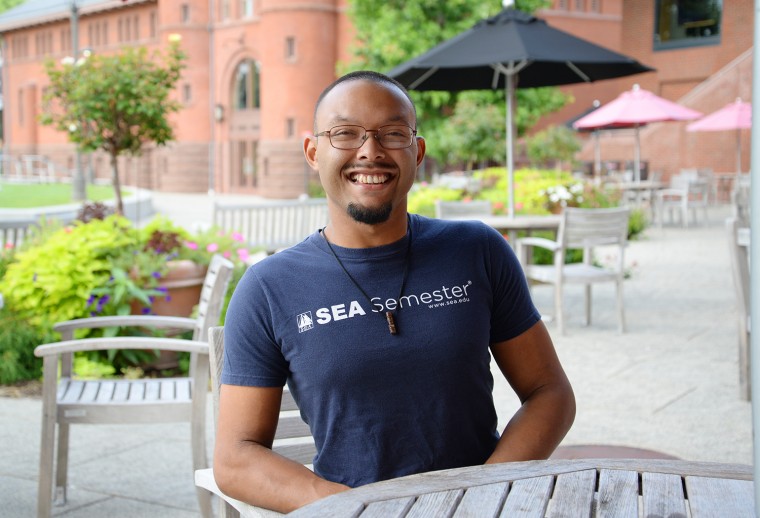 In this News @ Wesleyan story, we speak with Robert Ramos from the Class of 2016.

Q: Robert, where are you from and what is your major?

A: I’m from Philadelphia, and I’m a biology and earth and environmental sciences double major.

Q: This summer you did a SEA Semester program, “Aloha ‘Aina: People & Nature in the Hawaiian Islands.” How did you become involved in the program?

A: I learned about the program from another Wesleyan student who had done it a few years ago. As a biology and E&ES double major, it sounded like it was right up my alley! At the time, I was thinking about how I was going to apply my studies—what I wanted to do with the rest of my life. This seemed like a good opportunity to explore new options.

SEA Semester does programs at sea all over the world. This summer just happened to be the trip to Hawaii, and I was very excited to go there! I also didn’t want to miss out on a whole semester on campus at Wesleyan, so this worked out well in that it was just five weeks in the summer.

Q: Please give us an overview of how you spent those five weeks.

A: I took two classes—on oceanography and marine policy—and did research on topics like ocean salinity, temperatures and currents. The bulk of the time was spent at Hawaii Pacific University’s Hawaii Loa campus, but we also spent 10 days on a sailboat, and gathered much of the data for our research out at sea.

Q: Do you have much prior sailing experience? What was it like living on the ship with 17 other students?

A: I had no prior sailing experience! I was shell-shocked. On the ship, there are a bazillion lines you need to learn how to work; each one controls a different part of the sail. I fared better than a lot of other people on the boat. I got a little sea sick, but nothing too bad. It was actually pretty smooth sailing. But it was hard, and sometimes I got a little grumpy. There were days I had to wake up at 3 am to help stand watch. I got splashed a couple times by big waves. In addition to hauling the lines and swabbing the decks, we were doing research in a lab on the boat.

Q: Tell us about some of that research.

A: We gathered data and ran a lot of different experiments. For example, we did a Newston tow, where we dragged a big net through the water for about half an hour, then analyzed what we caught. We caught a lot of things, like Portuguese man o’ war, baby squid, crabs, and zooplankton. We were divided up into different small groups, and my group was investigating what factors determine bathymetry—or the topography of the ocean floor. We combined our data with that from the group studying currents, and showed that currents play a large role in dictating bathymetry. At the end of the program, we wrote a five-page paper on our research, and presented it on a scientific poster.

Q: What did you study in your other class on marine policy?

A: We largely focused on the Hawaiian Islands Humpback Whale National Marine Sanctuary (what a mouthful right?), which encompasses large areas of ocean around various parts of different islands. We learned about current policies, which are now under review, and considered some of the alternatives being suggested. We were each assigned an island, and had to make a recommendation for what would work best in that specific location. I looked at the island of Moloka’i, which is struggling with overfishing.

The class also learned about a debate now raging over whether to install a Thirty Meter Telescope on top of Mauna Kea, the tallest mountain in Hawaii. It’s a super advanced telescope, which would allow astronomers to look farther into deep space than ever before, but it would require destroying the top of this sacred mountain which is also the natural habitat for the organisms endemic to Hawaii.

Q: When on land, did you get to travel around much?

A: Yes! We island hopped a lot and met many different segments of the community. We worked on different farms, and helped to maintain lo’i, fish ponds that ancient Hawaiians used to farm fish. We also worked with children. We all hiked up a mountain in Lana’i together and they taught us about the local plants. We anchored off the coast of Lana’i again during the sailboat portion of the trip and the kids came aboard to learn about things like knot tying, sailboat procedure, and about some of the organisms that live in the ocean such as dolphins, turtles, and even plankton!

We did a lot of hiking throughout the entire trip, and saw the peaks of some really tall mountains with elevations of up to 14,000 ft. In Hawaii, the peaks of mountains are sacred. They’re called wao lani, or litterally, the “realm of the gods.” Ancient Hawaiians would only hike up there to study the stars and learn celestial navigation which would be useful for sailing to the various islands in the chain and even others farther off like Tahiti. So the experience for us was quite spiritual.

Q: What was the most meaningful part of the experience for you?

A: It was working with the people. We got to learn about native Hawaiian culture and America’s effect on it. Throughout history, Americans have gone to Hawaii, taken their land and polluted their natural resources. That’s really particularly bad for an island nation because their resources are so limited. A lot of what they have is what they need. It’s very, very important in Hawaiian culture to only take what you need. A lot of their religion is tied into the land. Agriculture isn’t just agriculture to feed oneself, it’s also a form of worship. Learning about that and experiencing it first-hand was really meaningful to me.

I also truly enjoyed the diverse group of students I traveled with. There were religion majors, philosophy majors, poli sci majors. Some people came in with very little knowledge of biology or marine science, but everyone met or exceeded expectations. Being with this group made the trip all the more special.

Q: What other activities are you involved in at Wesleyan?

A: I’m on Throw Culture, a co-ed ultimate Frisbee club team. I also do different dance activities on campus. I did Terp last year and probably will again. I do burlesque in the spring. I do research with Jim Greenwood in his lunar lab. Last summer, we analyzed hydrogen isotopes in the apatite we found on earth compared to that which we found on the moon.

Q: What are your plans for after graduation?

A: I’d like to go to grad school—for what, I have no idea. I’d like to move somewhere on the coast. I might stick with marine biology!