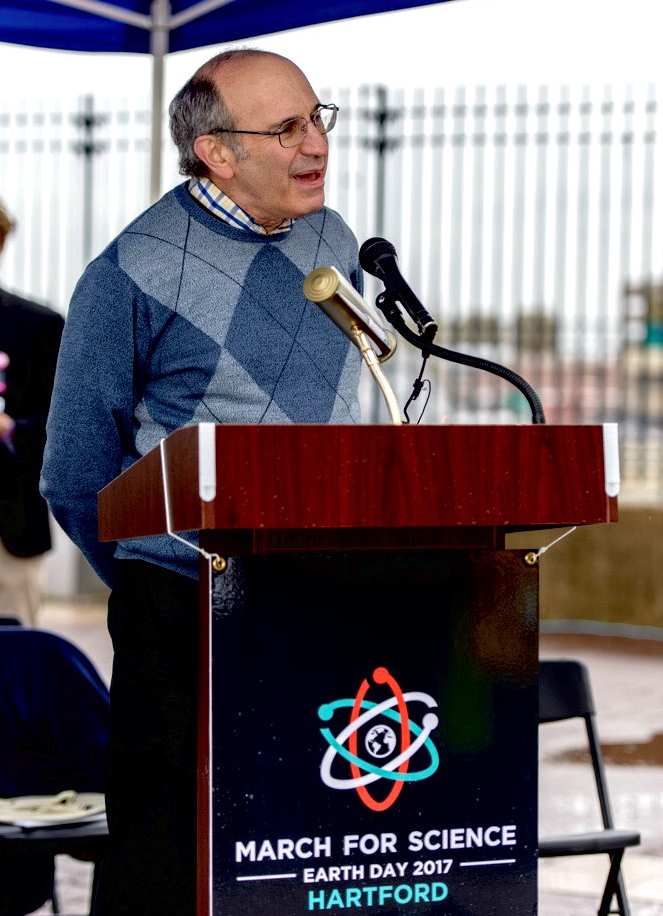 Numerous Wesleyan faculty and students in the sciences attended the March for Science in different parts of the state and country on Earth Day, April 22.

“I decided to march because science is being seriously threatened by the Trump administration,” she explained. “Trump has not filled almost all of the science positions, has no science advisor, and is using little evidence-based thinking in his decision making. Some of his appointments are puzzling and scary. From my perspective as a stem cell scientist, appointing Tom Price, who has consistently opposed embryonic stem cell research, as head of Health and Human Services presents a real danger to the future of this work just as therapies are entering clinical trials.”

“The problem is that we’re inclined to ignore the inconvenient truths from science about global warming—we seem quite willing to take a chance on hot, deadly summers or rising sea levels,” he said in his remarks. “Worrying about global warming is, to many, like worrying about heart disease. Many of us don’t fret about eating better, exercising better, or sleeping better, while on the other hand, there is a health issue we all worry about—and that’s infectious disease. If someone with a cough or a sneeze walks by, we go nuts! I believe our fears of infectious disease will be what reconnect us to science and protecting the environment. This is because science is showing that global warming and our other environmental impacts are bringing nasty pathogens to us. We should not think about global warming like it’s heart disease, but rather more like it’s the Plague.”

Other marchers included a delegation of 15 faculty members from the College of the Environment, several graduate students in biology, undergraduates and faculty from physics, computer science and other departments.