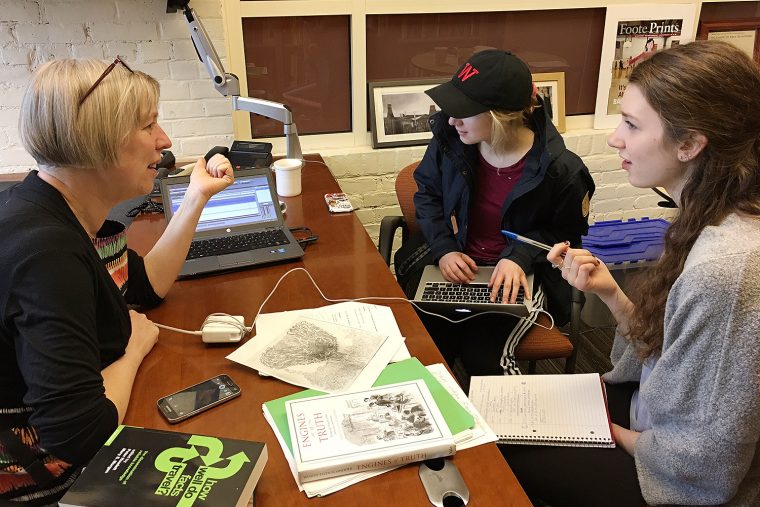 This year, students in Associate Professor of History Jennifer Tucker’s class, Seeing a Bigger Picture: Integrating Visual Methods and Environmental History, had an opportunity to share what they learned in an unusual format. They produced an hour-long radio program, which debuted on WESU 88.1 FM on Memorial Day. It will air again on the station this summer, and can be heard on wesufm.org or on SoundCloud.

Tucker and Dawson first met two years ago, when Tucker contributed an essay to a BBC series that Dawson was producing called “Five Photographs that (You Didn’t Know) Changed Everything.” After completing the project, Tucker invited Dawson to visit Wesleyan and help her class develop a radio program about environmental politics in Middletown and beyond, featuring the students’ writing and voices. Dawson’s visit was made possible through funding support from a Davis Foundation fellowship through Wesleyan’s Center for Pedagogical Innovation and from the Allbritton Center for the Study of Public Life.

For Tucker, writing for radio was an entirely different kind of writing than she’d done in the past, and, she said, “I thought it would be a fun experience to share with my students, a learning opportunity to find out some tips for public writing and communication on topics they are researching.”

The radio program was an optional project for the class, and all the students contributed in different ways. Some wrote features and conducted interviews, others read, found music, or did background research.

“As students honed their research for broader audiences through radio formats, they learned new ways of writing and envisioning the potential impact of their research,” Tucker said. “They worked collaboratively on the project, which fostered teamwork. And they researched Middletown and Wesleyan stories that related to the themes of the course.”

The finished product is an hour-long program comprised of interviews, conversations, and short and long audio essays. It includes stories about the environmental history of the Connecticut River and Middletown’s suspender factory; interviews with Peter Gottschalk, professor of religion, professor of science in society, and Michelle Murphy, who delivered the Annual Diane Weiss ’80 Memorial Lecture in March; a conversation with a member of a group that plants and cares for trees in Middletown; and a lighthearted look at the hit show ‘Planet Earth,’ among other content.

One member of the class, Abby Shneyder ’17, who was president of WESU, also provided essential background advice and practical support for the project, in addition to conducting one of the interviews on the program. She oversaw final production of the program and augmented the material with music and effects carefully chosen by the students.

“What probably surprised me most about this project was just how quickly it all came together. With Rosie’s help, most of the material used in the final program was produced in less than a week! With such a wealth of material and interest for conversation about the environment, we were able to collect a lot of really terrific audio really quickly,” Shneyder said. “Getting to work alongside Rosie was an absolute pleasure. Plus, how many college students get to say they’ve worked side-by-side with a senior producer for BBC Radio?? I think it’s safe to say, we were all pretty lucky to be part of this experience.”

Dawson consulted with the students on their essays, helped edit and “stitch” the program together, provided examples of radio programs for students to listen to and critique, and discussed with the class the challenges and opportunities of radio broadcasting today. She found it “rewarding and enlightening” to work with a group of students who, for the most part, had little experience with media and radio production, and to “see how their passion for their subject motivated them to learn new ways of communicating it.”

“Communicating complicated ideas to a non-academic audience can be a real challenge for students and faculty members whose writing and discourse is often necessarily theoretical and technical,” Dawson said. “Learning the skills of translation is vital for people who want to communicate beyond the academy. Radio is the perfect medium for doing this.”

She noted that at Wesleyan, “it strikes me that students have more freedom to explore within their chosen field” compared to universities in the UK. “The fact that they could take time within a course to do this—without the pressure of assessment—was part of the reason for its success.”

While at Wesleyan, Dawson also gave two presentations to faculty members on the academy’s engagement with the media, and on the journalistic challenges of communicating religion in the U.K. context.