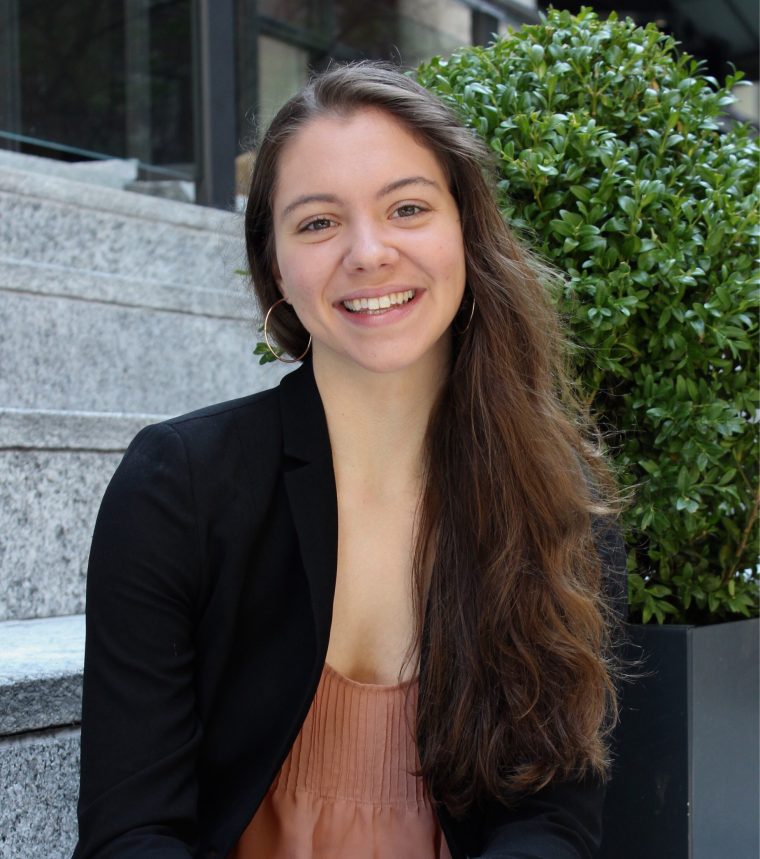 Sophie Zinser ’16, deputy director of Syria Direct in Amman, has been selected as a Schwarzman Scholar, one of the world’s most prestigious graduate fellowships, located at Schwarzman College at Tsinghua University in Beijing. This Schwarzman Class of 2020 is only the fourth in the program’s history, with 147 Schwarzman Scholars selected from over 2,800 applicants. The class is comprised of students from 38 countries and 119 universities, with 40 percent originating from the United States, 20 percent from China, and 40 percent from the rest of the world. The Class of 2020 will enroll in August 2019.

In a press release announcing the news, Stephen A. Schwarzman, cofounder, chairman, and CEO of Blackstone, and chairman of Schwarzman Scholars, said, “Our newest class includes a diverse group of future leaders from around the world. They join a global network of Scholars who have committed themselves to being a force for change, regardless of where their professional or personal passions take them. My hope is that a year in Beijing will inspire and challenge these students in ways they haven’t even imagined. I look forward to seeing how this new class will leave its mark.”

At Wesleyan, Zinser double-majored in the College of Letters and French studies. She cofounded the Wesleyan Refugee Project, and following graduation, Zinser worked on a congressional campaign in Minnesota and in international development with the International Rescue Committee’s Emergency Team in New York. Last year on a Fulbright scholarship to Jordan, she led innovative research on safety risks to rural and refugee women. In her current role with Syria Direct, she manages a team of Syrian and foreign journalists in Amman and leads the media nonprofit’s expansion. At Schwarzman College, Zinser will study China’s growing influence on foreign aid.

Reached via email with a Skype call follow-up, Zinser answered a few questions about the program, her background, and her goals. She also offers advice and encouragement to current undergrads and younger alumni: “What I learned at Wesleyan was to listen deeply to people who were very different from me. I learned to enjoy being challenged and to listen to what people need in charged social situations.”

Q: How did you learn about the Schwarzman Scholars program—and what was it that resonated with you? What made you excited to apply?

A: After living in Connecticut for 22 years, I knew that I wanted to complete my master’s abroad. While still at Wesleyan, I had learned that Schwarzman was an exceptional opportunity for those interested in international affairs to really understand China.

While I was always curious about that global power’s growing influence, I wasn’t sure how prevalent it was until I started working in Jordan, where it became clear to me that China is set to eclipse Western nations as the dominant force driving the future of international development.

In Jordan, I also saw how dismissals of China’s development model as “ruthless capitalism” are leading to dangerous lack of deep inquiry from Western aid organizations into how China’s foreign aid strategy will forever impact the low-income countries in which both Chinese and Western development actors operate.

Without their efforts and those of their colleagues, I would never be getting this life-changing opportunity. Keep your Wesleyan networks strong, as the people in them will continue to change your life long after graduation.

Q: Schwarzman’s Global Director of Admissions Rob Garris said: “Schwarzman Scholars are risk-takers. They’re people who see how the world is changing and are willing to do something different to shape that change.” How does this apply to you?

A: People living in communities that major international aid agencies serve or in areas wracked by war are being systemically excluded from getting a seat at the decision-making table about social services or policy determinations made about their communities. Refugees and other marginalized groups deserve the power to create and implement policies that impact their communities. Bridging gaps between NGOs, government actors, and recipient populations motivates my work in this sector.

International aid—although brimming with well-intentioned people—is, at its core, the messy work of cleaning up after systemic problems that have harmed innocent lives. Nearly every program and organization brings with it both great ideas and significant cultural oversights. Layers of trauma—from the life-shattering kind that afflicts individuals who have experienced the consequences of war and displacement, to the secondary trauma that emotionally-aware aid workers face daily—can have omnipresent but little-discussed consequences.

I hope to always work in spaces where I am free to innovate. I feel I have been able to do that so far, working in Emergency Response, as a Fulbright Scholar at the University of Jordan, and now at a media outlet and training center called Syria Direct here in Amman.

Q: You cofounded the Wesleyan Refugee Project: When and how did the plight of refugees become a commitment you had to act on?

A: My grandmother was a genius and a polyglot, one of the first women to graduate with a master’s in international affairs from Johns Hopkins SAIS. After she passed, I decided to take Arabic at Wesleyan. I couldn’t get into Arabic class during the add-drop period, as the section was full. I gathered a couple other students and we petitioned to open an 8 a.m. section. Professor Aissa agreed out of the kindness of his heart. Because of how generous he was with his time that year, he became the single person who most changed the course of my life.

Learning more about the Middle East through Arabic drew me to cofounding the Wesleyan Refugee Project (WRP) with Cole Phillips ’16 and Casey Smith ’17. As a coleader, I had the privilege of working closely with Chris George of Integrated Refugee & Immigrant Services(IRIS) in New Haven, and taking Wes volunteers to IRIS’s New Haven office twice a week to help local refugees fill out paperwork for energy assistance and subsidized housing. When we needed a van driver from Wesleyan to transport us, I took on the task, even though I am a very cautious driver who doesn’t love driving. That is how committed I was to making WRP run smoothly. I also remember sitting in a community service office in New Haven with some IRIS clients when I got an email saying that I had been selected for a top College of Letters award. I remember feeling great dissonance: incredibly honored to have been recognized for my three years of efforts in the department, yet struggling to comprehend why it was so difficult for our clients to get a $500 electricity reimbursement that they were legally entitled to. Wesleyan helped me navigate dissonance and inconsistency a lot, and constantly challenged me to move beyond my comfort zone. These things have greatly propelled me to both producing high-quality work and cultivating a rich and full life post-Wesleyan.

Q: You are one of only 147 Scholars selected from nearly 3,000 applicants. Have you met your cohort yet? What are you most looking forward to learning from/sharing with them?

A: The fact that I was selected out of such an enormous group of applicants is still insane to me. I was flown out from Jordan to Thailand for 48 hours in late October to stay in a five-star hotel on a river for a Schwarzman interview. It was the most glamorous experience of my life. During those 48 hours, I met incredibly kind poets, scholars, activists, and consultants from India, South Africa, Egypt, and Singapore, many of whom I keep in touch with regularly. Many of these people were actual geniuses and prominent young leaders in their home countries. We had fascinating conversations, particularly about global politics, that really challenged me. I remember thinking on the flight back to Jordan, “If I get to spend one year with people like that, I will be the luckiest woman in the world.”

A: I am committed to learning Chinese, as I have seen how my proficiency in Arabic has altered the way I live in Jordan. As my current position involves long working hours and necessitates a continued focus on Arabic language, I am currently researching language programs to immerse myself in the summer before Schwarzman. I know that this will be a huge challenge, but I hope it will also allow me to more deeply understand and connect with my fellow Chinese students and professors.

Q: How do you think this will propel your work after the program is over? What do you see yourself doing in five years? Ten years?

A: The Schwarzman Scholarship will hopefully give me skills and lived experiences to foster dialogue between the West’s bureaucratic overburden and the rapid pace of China’s economic and industrial expansion. This will prepare me to work towards a senior position in a large development organization. In a senior role, I would include the perspectives of the world’s most vulnerable in major international aid decision-making while enhancing Western aid institutions’ shallow understanding of China’s foreign aid mechanisms. I am confident that this approach will ensure a stable future for global development.

Q: What words of advice do you have for the current students on campus? What do you foresee as the challenges we must counter up ahead?

A: Please, please, please radically believe in yourselves, especially when you feel no one else does. If you had told me that three years out of college, I would have worked on Emergency Response projects with the International Rescue Committee (IRC), done a Fulbright scholarship in Jordan, and be the deputy director of a Syrian-Jordanian media start-up working daily in Arabic and in English, I would have never believed you. I had no idea what I wanted to do when I graduated, and this has been a huge advantage for me professionally. Not signing onto a several-year contract was the best decision I could have made. It’s not for everyone, and many have very valid reasons for signing onto a long-term position, but if you can, I would give yourself time to explore a bit. If you can, I would also encourage people to travel a lot after Wesleyan, and challenge what they think they are capable of understanding. And keep in touch with your Wes friends! They are still some of the best people you’ll ever meet, and have been my support system for the years post-Wes.

previousThornton Leaving Legacy of Student of Color Recruitment at Wesleyan