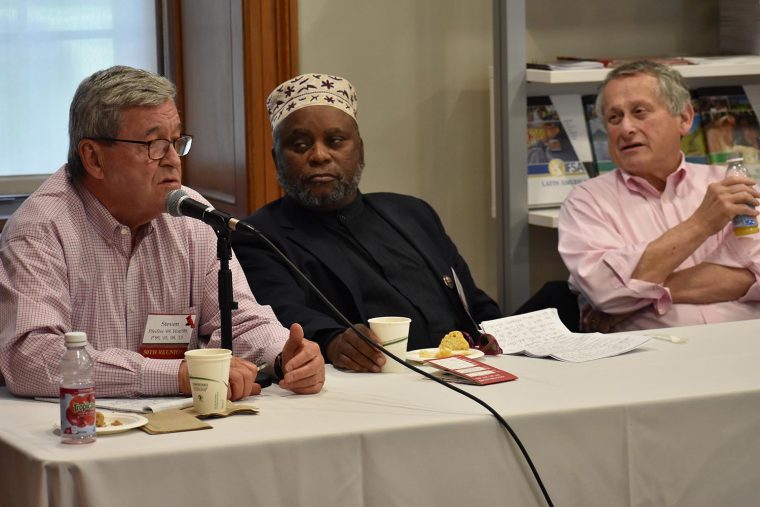 “We have here a panel of heroes, both for what they did at Wesleyan and what they’ve gone on to do,” said Young, the Arthur F. Thurnau Professor of Sociology, Afroamerican and African Studies, and Public Policy (by courtesy) at the University of Michigan, and the panel’s moderator. “They’ve demonstrated the capacity of agents of change, and they demonstrate the greatness of Wesleyan.”

Remarks excerpted from the discussion:

“During my time at Wesleyan, I was taken apart and put back together countless times. I grew up in a town in Chatham, New Jersey, that was all white. I got to Wesleyan and had Reverend [Edwin] Sanders on my hall; it was the first time I’d been around a black person . . . and I quickly discovered this was a place truly committed to equal access to black students to selective private education. Having been here at that time, seeing Dr. Martin Luther King, Jr. walk in and out of Olin Library, that was truly inspirational. I felt then, and later as a member of the Board of Trustees, that Wesleyan has had an uninterrupted and complete commitment to civil rights and racial justice [since the Fisk Hall Takeover].”

“I came here and . . . we couldn’t get our hair cut in Middletown. The barbers would not cut our hair. But it was the classes that came after us that had a fairly large number of non-white students. By 1969, when we took over the hall here, there was a fairly large cohort of black students. So the credit goes to those classes, as well, not just us. . . . Equality and equity came about through our experience. And I’m pleased and honored to have gone through that, and I congratulate the president and the University [on the progress since].”

“I remember this building [Fisk Hall] very well. I came in one side in September and I came out the other side in April fluent in Spanish. And there were other things happening in this building. People were challenging the authority of a special, historical university. The Vanguard Class [consisted of] a handful of people who were not normal. They were not normal because they were exceptional. And they were the ones who ended up doing the real work on this campus.”

“I understood Vanguard to mean more than black. That is, I didn’t understand it to be only black. . . . [At Wesleyan today] you have a place where everyone is welcome. Everyone is treated well.”

“There is [something else] that’s been one of the greatest assets to the Wesleyan experience—the significance of being at a school where there were 1,200 students and 250 faculty. That created a learning environment that is really beyond comparison, and also a learning environment where there was a fine-tuning of the individual experience. . . . What I learned in classes where there were no more than 12 or 15 of us sitting around a table with a professor, having the opportunity for interaction and dialogue, to this day [continues to serve me].”