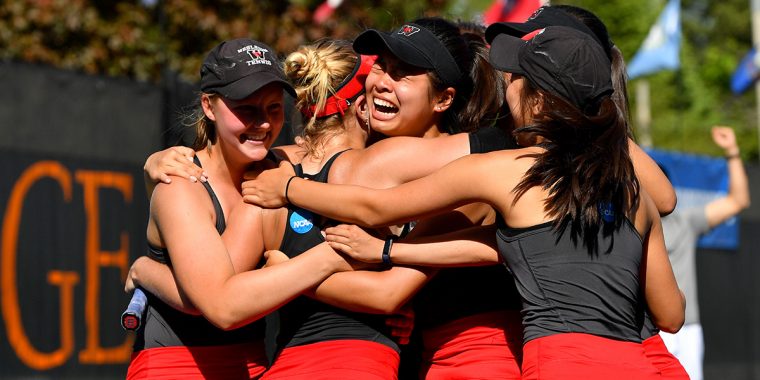 After a historic 2017-18 campaign that featured the University’s first national team championship (men’s lacrosse) and a record-setting five-time individual champion in tennis (Eudice Chong ’18), the Cardinals raised the bar once again this past year with arguably the greatest all-around season in Wesleyan Athletics history.

Wesleyan’s women’s teams led the way this past year with historic performances across the board. The women’s tennis team won its first-ever Little Three Championship and first-ever NESCAC title before reaching the NCAA Tournament and hosting the first, second, and third rounds for the first time in program history. After cruising through the regional rounds and the quarterfinals, the Cardinals upset the top-ranked team in the country, Emory, 5-4 to advance to the championship match. In the Finals, Wesleyan earned another thrilling upset when sophomore Polina Kiseleva prevailed in the final match as the Cardinals defeated the defending national champions and No. 2 Claremont-Mudd-Scripps, 5-4.

Earlier in the season, Uzamere threw a personal-best mark of 19.36 meters in the weight throw at the NCAA Division III Indoor Track and Field Championships in just her second collegiate season. She became the fourth track and field athlete in Wesleyan history to win a national title and was the first-ever in a field event. Uzamere was also the Cardinals’ first track and field athlete to win a National Championship since 2007.

In addition to the national championships, women’s volleyball started the 2018-19 season off strong as the Cardinals earned an at-large bid to the NCAA Tournament before advancing to the Quarterfinals with a 3-1 win over No. 2 Johnson and Wales. It was the first time in program history that the Cardinals reached the Elite Eight. In the spring, aside from the women’s tennis success, women’s lacrosse set a program record in wins (17) en route to its first-ever NCAA Final Four berth. Wesleyan hosted First and Second Rounds for the first time ever and defeated No. 9 Mary Washington (11-6), No. 2 Washington & Lee (13-7), and the two-time defending national champions, No. 1 Gettysburg (10-7). Around the same time as the women’s lacrosse and tennis success, women’s crew earned its best finish ever at the NCAA Division III Championships as it placed fourth overall, while men’s crew capped off a historic season a couple of weeks earlier, which was highlighted by winning the New England Rowing Championships for the first time since 2004 and the fourth time overall.

With all the success that occurred in 2018-19, Wesleyan moved all the way up to No. 14 in the final Learfield Directors ‘Cup standings, which is the University’s highest finish ever.