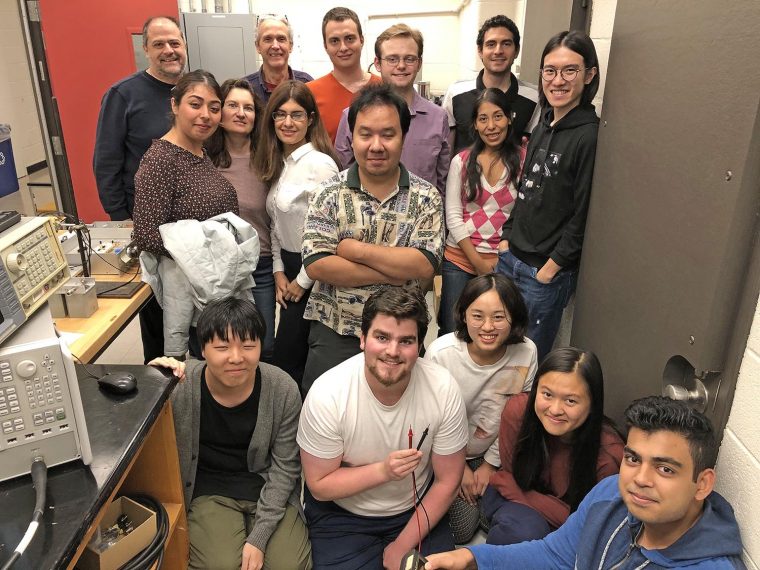 The Physics Department’s Wave-Transport Lab recently received awards totaling $709,000 to support its ongoing aim to understand and manipulate the movement of waves—sound, mechanical, or electromagnetic—through natural or human-made materials.

The lab received a $340,000 grant from the National Science Foundation’s Division of Civil, Mechanical, and Manufacturing Innovation program titled “Engineering Dynamical Symmetries for Extreme Wave-Matter Interactions in Elastodynamics,” and a $369,000 grant from the Department of Defense’s Office of Naval Research (ONR) titled “Waveform Shaping Techniques for Targeted Electromagnetic Attacks.”

Joseph Knee, Dean of the Natural Sciences and Mathematics, and Beach Professor of Chemistry, secured the initial investment that the Wave-Transport Lab needed to test theories. Two years later, the lab has grown to include four post-doc associates, four graduate students, four undergrad students, and now outside funding that “pays back in triple the university investment,” Kottos said.

The NSF grant (totaling $610,000 with Wisconsin-Madison’s portion) is shared with the Department of Engineering Physics of the University of Wisconsin-Madison, and is strongly supported by Dean Knee. It supports the next steps in this new initiative to investigate how mechanical waves move through materials.

“The goal,” Kottos said, “is to use clever mechanical designs that enhance the interaction of the underlying mechanical structure with elastic waves that propagate in such a structure. A typical example is a hypersensitive sensor for surface cracks.”

The ONR grant supports an ongoing theoretical effort in electromagnetic warfare that was first proposed a couple years ago by Kottos, post-doc Huanan Li, and PhD student Suwun Suwannarat. The idea is to develop “clever” electromagnetic weapons that emit low power waveforms that can intercept incoming hypersonic missiles (missiles that travel at approximately 15,000 miles per hour).

“Clever” because rather than emitting a large amount of electromagnetic energy to knock missiles out of the sky “the brute-force way,” Kottos said, “we propose to develop algorithms that design waveforms that target the ‘Achilles heel,’ the sensitive electronic circuit that is responsible for the navigation of the missile.” The proposal has recently been confirmed by two experimental groups.

Although the equipment the Wave-Transport Lab needs to pursue its research is expensive and specialized, the concepts needed to find solutions come from very fundamental physics. According to Kottos, in the case of their mechanical wave research, “all tools that we use are coming from Physics 214 (sophomore-year physics), which my colleague Francis Starr is teaching this semester. Nothing more than this! Equipped with these tools, and together with Fred and our students and postdocs we will build a new, very advanced type of accelerometers and crack-sensors.”

Kottos and Ellis, along with Professor Ramathasan Thevamaran from Wisconsin-Madison, are also planning to establish a weekly video-seminar series on “Mechanical Metamaterials.” This will be an exciting opportunity for students at Wesleyan in which they will “virtually” interact with their peers from W-M, an established school in engineering. By blending liberal art and professional engineering mentalities, undergraduates receive a more well-rounded learning experience that teaches them not only how to understand and communicate problems, but to solve them as well.