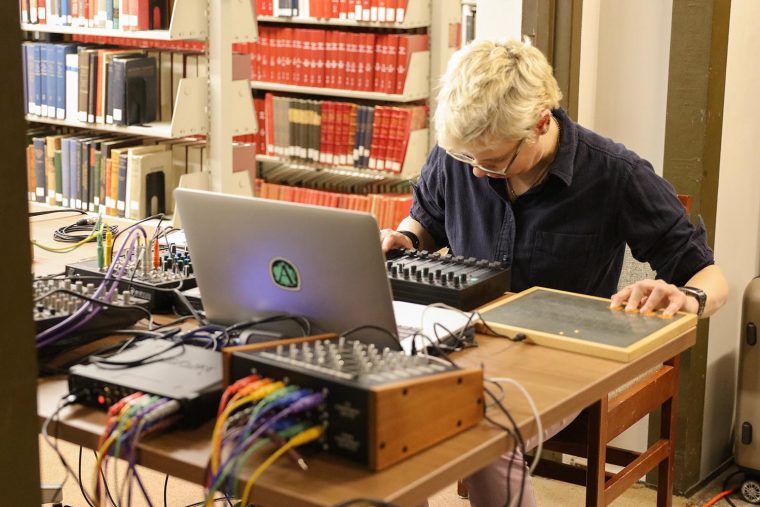 Jin Hi Kim, adjunct assistant professor of music, is known for introducing the kŏmungo (a six-stringed Korean zither) into the American contemporary music scene. The Guggenheim Fellow composed a series of compositions for chamber ensemble and orchestra using her “Living Tones” philosophy, which holds that each tone generated is treated with abiding respect.

Wesleyan currently owns 16 of her scores, written for both instrumental and vocal performances.

“It’s not only important to showcase our faculty’s work, but also her scores are part of our circulating collection so that students, researchers, and musicians can actively play from and study them,” said Jennifer Hadley, library assistant for World Music Archives. “Jin’s compositions particularly suit the collection because of her combination of experimental and traditional Western and Korean musical elements.”

As part of Hidden Volumes, library-goers encountered a series of improvisational music, sounds, and performative art within Olin’s stacks. The durational performance was initiated by Associate Professor and Chair of the Music Department Paula Matthusen and visiting scholar Terri Hron in 2017. This year it was expanded to include music faculty, graduate students, alumni, and other improvisers. Performances were dispersed throughout the stacks over the course of six hours, and many explored the sonic resonances of the library.

“Today has been all about exploring library spaces and library collections—and bringing them to life musically,” said Aaron Bittel, director of the World Music Archives and music librarian. “I’m really pleased that we could host this collaboration with the Music Department. It’s not the first, and it’s hopefully far from the last.”

Following the performance of Hidden Volumes, Jin Hi Kim discussed the compositional concept of Living Tones. Adjunct Assistant Professor of Music Nadya Potemkina (on viola) and graduate student Aliya Ultan (on cello) performed “Kee Maek,” one of the scores in the collection. Kim ended the evening with a performance on the electric kŏmungo.

As part of Living Tones, the Music Library is displaying samples of Jin Hi Kim’s scores and recordings on the first and third floors of Olin Library.