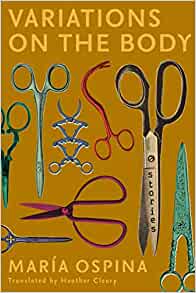 María Ospina, associate professor of Spanish, believes that writing fiction is another powerful way to engage the subjects that have driven her academic work—memory, violence, and culture.

“Right now, I think that this is the way that I am going to continue exploring intellectual issues that interest me, including those related to history and politics,” said Ospina, who previously published a book of cultural criticism.

Her debut book of short stories, Variations on the Body, has been translated into English from Spanish by Heather Cleary and was published in the United States in July by Coffee House Press. The book (Azares del Cuerpo) had been previously published in Colombia (where is it already in its third edition), Chile, Spain, and Italy, receiving raves from critics.

In six loosely connected stories, Ospina, who was born in Bogotá and is also associate professor of Latin American studies, follows women and girls from different parts of Colombian society. Through meticulous prose, characters struggle with searching for a community after migrating and with the marks that that voyage leaves on the body. It’s a book filled with tactile imagery and almost a journalistic approach in how it documents the lives of its characters. “Policarpa,” the first story in Ospina’s collection, sets the tone for what’s to follow. A young woman who had served with the FARC guerilla movement is being reintroduced to society. She has a retail job and is telling her war experiences to an editor, who is subtly changing her tale to become more palatable for an urban audience looking for adventure.

We later meet a little girl with a complicated relationship with her nanny, a woman wrestling with a flea infestation, another woman seeking someone to care for in the city where she was born, and an older woman who becomes emotionally dependent on her beautician.

Ospina mines her extensive research and personal experience to conjure the Bogotá of her youth, a place that she knows intimately but now, since moving to the United States, can view with the eyes of a migrant. “I think that every piece of fiction has a huge autobiographical component. This book captures some of my daily personal experiences growing up in the city, as well as some historical events that I have witnessed there,” Ospina said.

For example, Ospina went back to Bogotá for a year to do research for her doctorate. The government was negotiating with paramilitary groups to return to civilian life. Many of the very people who were once considered a threat were migrating to the city under a new government program, Ospina said, creating palpable tension in a place where, at that point, many people perceived war as a rural problem. The seeds of “Policarpa” and “Saving Young Ladies” were planted here. “I was interested in how and if hospitality works.  These people had committed a lot of crimes, had been part of a very complicated war, and now city dwellers needed to figure out how to open up a space for them,” she said.

Ospina had started writing fiction as an adolescent but started exploring the short story form in earnest when she was getting her doctorate. Due to her studies, fiction was something she worked on between her research project. “It was sort of like writing in secret,” she said.

In Latin American literature, the short story holds tremendous cultural significance as a way of exploring larger political issues. Fiction allows Ospina to reach a wider audience to engage them in an emotional way with some of the topics that matter to her the most. “It is central to political inquiry. Some of the most interesting ‘philosophers’ in Latin America are short story writers,” she said.

Her next novel, which is scheduled to be published in Colombia in spring 2022, deals with nonhuman animals and the environment, another area of interest. “Fiction is an enormous space of inquiry where I have the freedom to truly explore urgent intellectual issues,” Ospina said.

Ospina’s work in the classroom feeds her fiction—her classes in writing fiction in Spanish have allowed her to have deep engagement with the craft of fiction. This fall she’ll also be teaching a course called Territories of Dwelling, Desire and Resistance in Latin America.

“The classroom space is such a vibrant, intellectually stimulating place,” she said. “I think that my pedagogical practice is one of the very important sources of my creative work in general. I feel like Wesleyan feeds my creative energy in so many ways, including through the amazing artistic programming that the University offers.”

Hot Off the Press: Short Stories by María Ospina