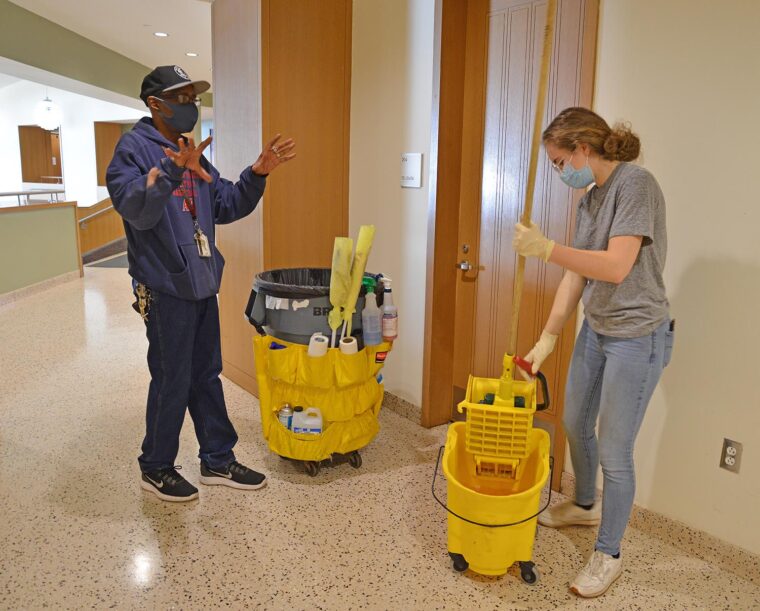 Every day the workers of Wesleyan’s facilities staff labor to keep the University going in the most fundamental ways. Their work can often be invisible but without properly ventilated performance spaces, clean laboratories, and functional classrooms, just to give a few examples, the University would grind to a halt.

An upcoming multidisciplinary dance project titled “WesWorks” takes the rituals and movements of their days and creates choreography that transforms the ordinary, mundane, and skillful movements of work into a performance accompanied by live, original music and stories told in the workers’ voices. The performance will take place outdoors on Andrus Field in mid-October.

“I hope the community leaves with an elevated understanding of what our staff does. This is a celebration of our employees and a recognition of a workforce that’s often not recognized,” said Jennifer Calienes, interim director of Wesleyan’s Center for the Arts.

“Wesworks” builds on seven years of Forklift Danceworks’ engagement with Wesleyan through the College of the Environment and the Center for the Arts and was developed through a series of residencies and intensive course collaborations over the past year and a half.  During the Spring 2021 semester, students job shadowed facilities workers, learning just what it took to the keep the campus running smoothly.

This fall, Allison Orr, the choreographer and artistic director of Forklift Danceworks, distinguished fellow in the College of Environment, will teach her ENVS376 course—The Artist in the Community: Civic Engagement and Collaborative Dancemaking from which students will learn techniques of community art practice and help develop and support the “WesWorks” performance.

“I think this [show] opens up a world of understanding for students of the incredible support network that is on a university campus,” said Rani Arbo, CFA’s Campus and Community Engagement Manager.

Orr’s efforts across the country have created dance performances in the most unlikely ways and with the most unlikely candidates. Baseball players, trash service workers, dining services employees, and water company employees have participated in Orr’s community art making practice. “Allison’s work centers the workforce, pulling forward the labor of individuals and what they do all day,” Arbo said.

Orr uses the movements inherent to the work itself to create a stylized version of it. “It is the day-to-day of what happens seen through a new lens,” Calienes said.

Tamara Rivera ’21 participated in the program throughout her entire time at Wesleyan. This past spring, she shadowed Maria Porquillo, a custodial worker for over two decades at the Olin Library. Once a week, Rivera met Porquillo at the library from 7 to 9 a.m. “She is moving and doesn’t stop moving. There was a perfect rhythm that developed between me and her,” Rivera said.

Rivera and Porquillo worked together, wiping down tables and vacuuming floors. They began with just introducing themselves and a few passing words between tasks. Over time, they developed a deep personal relationship talking about their lives and families, Rivera said.

“It ended up being a transformative experience for me,” Rivera said.

“It brings the community together. The college academic world with the students and the workforce/blue-collar community were able to collaborate. It brought me out of my box and allowed me to learn about other places,” said Dean Canalia, Wesleyan Physical Plant Plumbing Foreman and previous participant in campus engagements with Forklift Danceworks.

The hope is that by bridging workers, students, and administrations, we can see that we are all Wesleyan. “Everyone should be involved in doing this because it would create a tighter bond in the community itself,” Rivera said.

A mantra of Wesleyan’s dance department is that everyone can dance. By watching people do it, you get to know who they are. “It’s an invitation to be seen in a different way,” Calienes said.

The performances will take place outdoors on campus Thursday through Saturday, October 14-16 at 7 p.m. Click here to reserve free tickets.

This is the first time there will be a large public presentation of the work. The performance will take place at several locations across campus, including Andrus Field and the Power Plant.

While Calienes didn’t want to give away any of the surprises, audiences can expect a spectacle of movement, light, and original music composed by Graham Reynolds and performed by musicians drawn from Wesleyan and the local community.