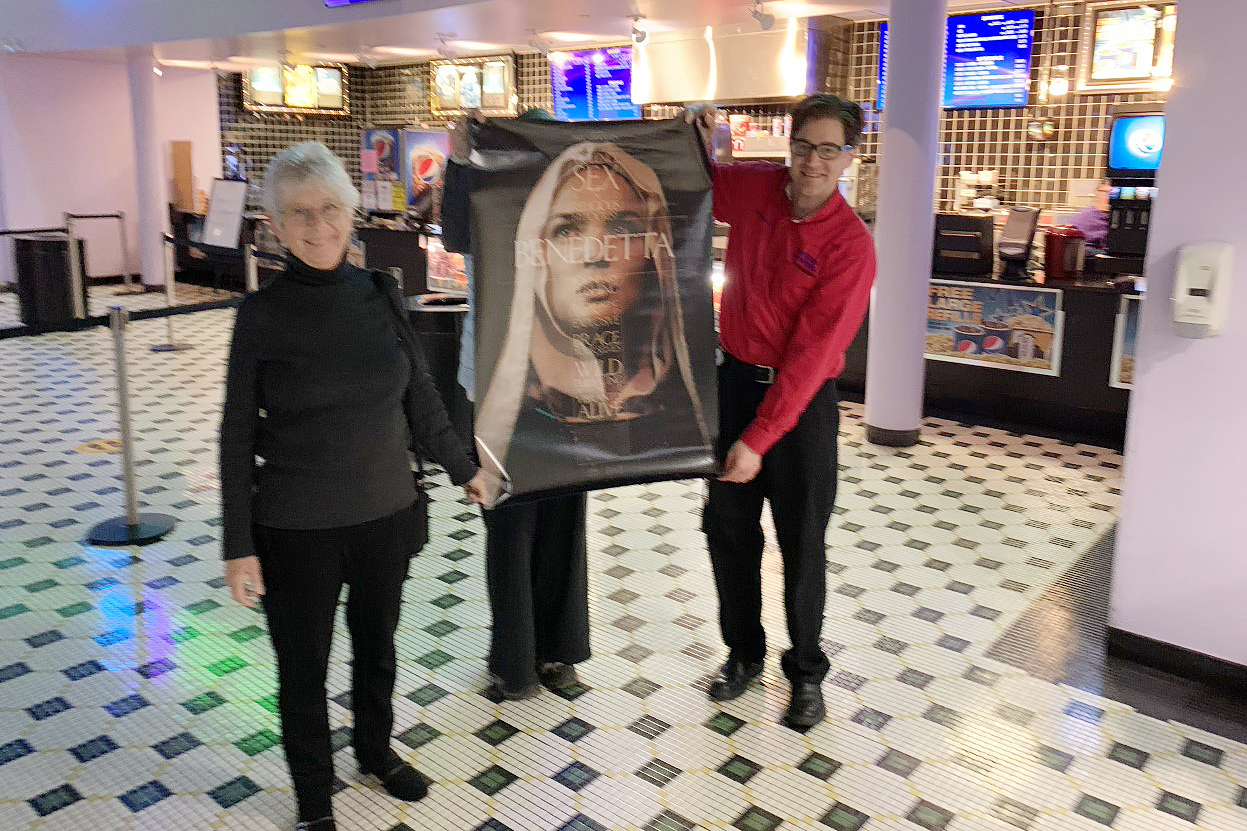 It is not every day that an academic history book inspires a film by one of the world’s leading directors, especially when its author is former provost and professor emerita of history, Judith C. Brown.

The book tells the story of Benedetta Carlini (1590-1661), an abbess in Tuscany, who was imprisoned for claiming false visions and for allegedly having sexual relations with one of her nuns, Sister Bartolomea.

Benedetta’s story remained undiscovered until Brown, whose scholarly interests include the history of early modern Europe and Renaissance Italy, as well as the history of women, gender and sexuality, accidentally came across the Church’s records of the case in the State Archive of Florence while researching her doctoral dissertation.

“This may be the earliest account of a sexual relationship between two nuns,” Brown said.

Benedetta is the latest film for Dutch director Paul Verhoeven, who is known both for Hollywood films such as RoboCop (1987), Total Recall (1990), and Basic Instinct (1992), as well as European art house releases such as Elle (2016).

The University first offered two free screenings of Benedetta on Dec. 5 at Metro Movies in Middletown during its first week of theatrical release in the U.S. That was followed by two campus discussions about history and film.

On Dec. 6, Verhoeven spent an hour discussing the film and fielding questions from a Wesleyan audience in a virtual event moderated by Lisa Dombrowski, professor of East Asian studies and Jennifer Tucker, associate professor of history. Verhoeven explained how he was introduced to Brown’s book by screenwriter Gerard Soeteman. “It took five years to write the screenplay because we had been reading the book in a very different way. For Gerard, Benedetta (played by Virginie Efira) was a 17th-century woman who succeeded to get power in a completely male society. For me, Benedetta was, yes, a woman who sought power, but she used that power to have a sexual relationship with another nun, Bartolomea (played by Daphné Patakia).”

Verhoeven also talked about some of the challenges of trying to represent on screen Benedetta’s religious visions, prophecies, and her sexuality.  He drew, among other sources, on medieval paintings and texts, such as the texts and art works of another early abbess, Hildegard of Bingen (1098-1179).

“I appreciated the event so much,” said Nathan Draluck, reviews editor for the American Historical Review journal in an email. “It’s refreshing when ‘historical fiction’ doesn’t have to be a disclaimer to how we learn about the past.”

On Dec. 7, Brown took part in panel discussion at Russell House, moderated by Mary Jane Rubenstein, professor of religion and science in society, and Ellen Nerenberg, Hollis Professor of Romance Languages and Literatures.

Brown explained that when she came across the papers in the archive, she initially thought they were about a nun who had an affair with a priest, but after closer examination, she learned the affair was with another nun. As a historian, Brown felt “One has to go back to fill in the holes in all sorts of ways. So in a sense, I’m telling the story that’s in the documents, but at the same time, filling it in with acquired knowledge about how life must have been, what the costumes may have looked like, what their buildings could have been like, what kinds of cells they had, or didn’t have, that sort of stuff.”

Both historians and filmmakers engaged the film with ambiguity and interpretation.

“As I watched Benedetta, which was equal parts engrossing, disturbing, and exhilarating, it was gratifying to see the extent to which Verhoeven was attuned to the material sensibilities of Renaissance Italy,” said Roman Utkin, assistant professor of Russian, East European, and Eurasian studies.

The film and book discussion also activated discussion about gender, religion, and sexual consent in early modern Europe, with several participants noting that Bendetta’s complex conception of gender went beyond that of “lesbian nun.” Panel hosts Rubenstein and Nerenberg considered the absence in the film of Benedetta’s visions of the angel Splenditello, in whose guise Benedetta could see herself as having sexual relations with another woman.

Nerenberg explained that, in the book, “Splenditello, like the other angels that populate Benedetta’s visions, comes to her as a ‘beautiful boy.’” She added: “Benedetta seems to see herself enacting with Bartolomea the desire emanating from the male figures in her visions. Yet agency and knowing desire in Verhoven’s film, on the other hand, are attributed to Bartolomea, the first to initiate Benedetta into sexual activity.”

What is gained in this shift, according to Brown, is greater emphasis on skepticism about Bartolomea’s claim that all her actions were forced by the older and more powerful Benedetta. On the other hand, what is lost, Brown notes, is the importance of heterosexual prototypes for women’s sexuality in premodern European culture. India Dixon ‘22, who attended the panel, and who had read Brown’s book during a Christianity and Sexuality course, reflected on this change: “It surprised me that the movie went from that, to making Bartolomea the seducer. If anyone was a predator based on the original text, it was Benedetta.”

Brown emphasized that the ambiguity in the original text is one of its appeals: “The story is ambiguous—political and religious; the characters are ambiguous. Benedetta may have been a manipulator or she may have been a multiple personality type. So perhaps the variety of interpretations among audience members is an inherent extension of the variety of motives that propel the actions of the various characters,” she said. “I think that this is part of what interested Verhoeven in this story.”

Dombrowski agreed, pointing out that “Adaptations always involve an element of selection, but the adaptation of this source material pairs selection with uncertainty. Judith’s book is based on testimony during religious inquests, and as she notes, the difference between fact and fiction is not always easy to tell—a theme Verhoeven very much foregrounds in the film. The ambiguity in the original text provided him with opportunities both to lean into the uncertainty and allow viewers to make up their own minds, and to highlight his own interpretation of certain events.”

For Tucker, who organized the series and recently co-edited a special issue of Radical History Review journal on “Visual Archives of Sex,” containing essays that explore the historical relationships of sex and visual production, the Benedetta events presented a rare opportunity to illuminate both the role of historical research in filmmaking, and the creative process and role of visual imagination in academic research. “Dr. Brown’s painstaking and imaginative scholarly research contributes to how we visualize this aspect of the past,” she commented, while “Paul Verhoeven is a true historian at heart.”

Tucker and Brown both previously taught the course Issues in Contemporary Historiography. For more than 30 years, that course has included a unit pairing a screening of the 1982 French film The Return of Martin Guerre with discussion of historian Natalie Zemon Davis’s 1984 book of the same name – based, like Immodest Acts and Benedetta, on records from a legal trial.  Davis consulted on the film, The Return of Martin Guerre.

Yet while the legend of Martin Guerre has passed down through the centuries, Benedetta’s story was unknown until Brown’s book uncovered her experiences. Tucker explained: “Nobody knew the story, which perhaps remained unexplored because women were at the center.”

Brown’s work was path-breaking: writing about women’s lives and other forgotten people’s stories required different approaches and methods than historians were typically using in the 1980s. Tucker explained: “Cultural history focused on non-elite people was itself a relatively new approach to history, one that often required different research methods than those conventionally used to study the intellectual or political history of well-known men.” In writing about the private and sexual life of 17th century women, she says, Brown had to bring Benedetta’s story to life.

Wesleyan graduate student Anya Shatilova was pleased to see Brown’s research make it to the big screen. “For me, as a young scholar, it is really inspiring to see that scholarly texts can be of such interest outside of academia,” she said.

Tucker, who is offering a new history course, Introduction to Visual Studies across the Humanities and Social Sciences next fall, would like to see Wesleyan do more collaborations like these, saying: “Historians and filmmakers can learn from each other. Most people get their knowledge of the past from film and television rather than from history books.”

“There is more to the relationship between historians and filmmakers than we might at first imagine,” Tucker suggested, adding: “The historians’ craft entails figuring out how to translate the materialities of history into narratives that readers can understand, while filmmakers make their own creative choices that are grounded in historical realities.”

Multiple departments and programs supported the three events including the History Department, the Feminist, Gender, and Sexuality Studies Program, the Science in Society Program, the Department of Romance Languages and Literatures, Center for Humanities, Allbritton Center for the Study of Public Life, and the Office of Academic Affairs.

A video recording of the discussion with Paul Verhoeven is available on the History Department website.