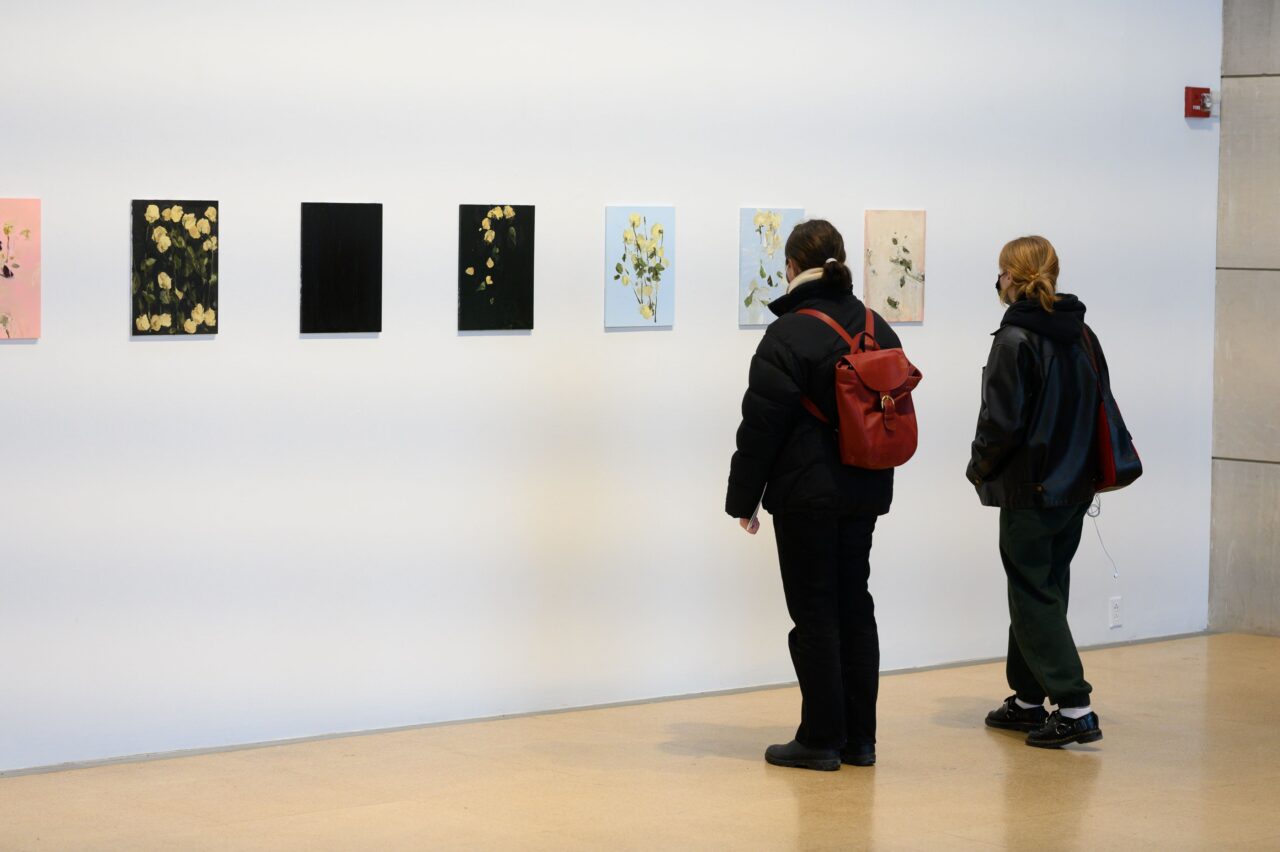 Benjamin Chaffee, associate director of visual arts, adjunct instructor in art, and curator for Wesleyan’s Ezra and Cecile Zilkha Gallery, has to crouch slightly when he tries to envision an exhibition from the perspective of someone of average stature. He said that when Brandon Ndife, one of the artists featured in the gallery’s latest pair of exhibitions, came to set up his postapocalyptic yet homely sculptures, Ndife had to crouch too.

The result of his careful curation is an uninterrupted view from the entrance of three consecutive sculptures, and the hint of one more hiding around the corner. If you reorient yourself to face the other wing of the gallery, Some Days by Dana DeGiulio spans the far wall.

Ndife and DeGiulio’s works are on display from now through March 6 at the gallery, from noon to 5 p.m. Tuesday through Sunday. In Ndife’s exhibition, “Down to the Spoons and Forks,” furniture and detritus form sculptures. DeGiulio’s exhibition, “Live or Die,” features 50 paintings created in the last three years

Versed in gestural abstraction, DeGiulio started and finished each of the 21 paintings in a single day. They are the most indeterminate of her works, which range in their depictions of flowers, Chaffee said. Their individual titles allude to figures from Emily Brontë to Pat Benatar. Tonally and texturally, Chaffee says “their closeness to the limestone makes the wall feel like a painting.”

Next to that series, a bra lies on the floor. It’s not clear whether it is an element of the exhibition or a sign of a self-freeing patron, until the informational plaque comes into view. Wet Fur Froze is the title. DeGiulio has slathered soap on an adjacent window, and Chaffee recalls the message that was drawn into the soap before the weekend’s rainstorms washed it away: “Amber will you marry me?”

Amber is not a girlfriend, but the fossilized resin in which bugs are suspended. The allusion to suspension in medium echoes the way pigment suspends in oil paint, and engages with concepts of form and content, and of symbolism and allegory, Chaffee explained. Though, when Chaffee wrote the descriptions for the exhibition, DeGiulio warned him against suggesting that the paintings were of anything more than flowers.

Chaffee notes that Ndife’s sculptures, like DeGiulio’s, are melancholic. They both visualize a sense of loss, of perhaps an acute personal kind, or of a more general existence that is so holistic that it numbs itself.

Ndife’s sculptures are also “temporally duplicit,” as Chaffee writes. Their embodiment of apocalyptic chaos and growth reach into the future, while their created decay fumbles with the past. Ndife built the stylistically antique-colonial furniture, out of which pour the fractured plates and diasporic vegetables.

Chaffee points out the sprouts and sweet potatoes that are real, though covered in resin so that they don’t collapse. There’s a certain sentimentality that Ndife presents in the gourds, of his experience of finding immigrant communities through cassavas in grocery stores. There is sentimentality, too, in the furniture whose value is found in the etchings of familial use.

The exhibition clings to all senses. Against the backdrop of a tree outside the gallery, Ndife’s most explosive sculpture oozes cast insulation foam and resin. A cabinet collides with a mutilated tree and detritus falls in all directions. In the undulating shadows of the tree branches outside, Chaffee says “you’re supposed to taste it.”

Ndife’s sculptures “represent something about the Earth, but they are also an allegory for the Earth. There is a displacement between the real and the simulacrum,” Chaffee said.

Additional photos of the exhibit are below: (Photos by Mark Brendel of Perceptions Photography)