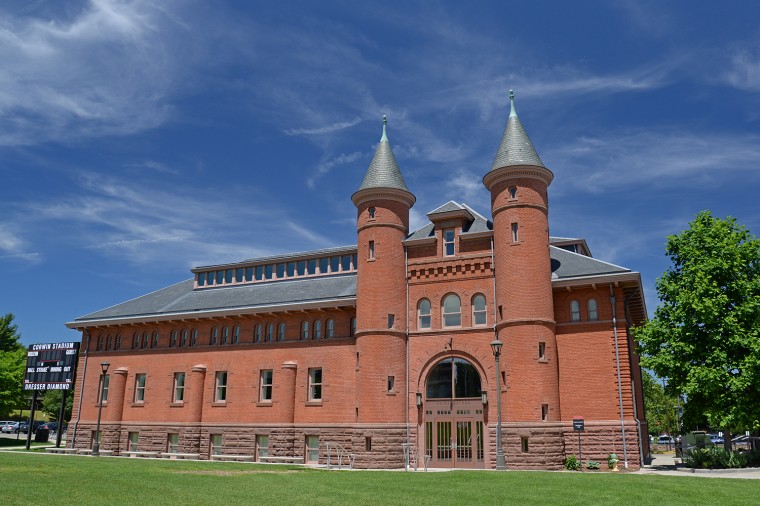 Mellon Mays Undergraduate Fellow Elena Brennan ’24 is as equally passionate about her American studies major as she is of helping fellow underrepresented and first-generation low-income (FGLI) students succeed.

As chair of the Wesleyan Student Assembly’s Equity and Inclusion Committee (EIC), she coordinated First Cardinals, an FGLI mentorship program that fosters connections between 40 first-years with juniors, and seniors. As a member of the BIPOC Mental Health Collective, she spurred a collaboration with the EIC, Wesleyan Student Assembly and Resource Center to host an event that addresses systemic issues on campus for marginalized students. And, in reaction to a post on Yik-Yak that caused harm to assault survivors on campus, she hosted two student listening sessions in partnership with the Title IV office and SHAPE.

For her outstanding efforts, the New Haven, Conn. resident received a Cardinal Crest Award, which is presented to a student who has demonstrated a sustained commitment to leadership in the WSA and for representing the interests of the student body. It’s among approximately 150 prizes awarded to students each May through Student Affairs, the Dean’s Office, and Student Involvement.

The awards program connects recipients to the legacies of alumni, administrators, faculty, and friends whose lives and work are honored through endowed gifts.

“The end of an academic year provides our community an opportunity to pause, reflect, and celebrate the many accomplishments of our student body,” said Kelly Dunn, dean for the Class of 2025. “Many of Wesleyan’s prizes highlight the intellectual curiosity, academic excellence, creative expression, leadership, and service of our students, while also honoring and thanking our alumni and friends for their generous gifts and contributions.”

Award recipients are also acknowledged in the Commencement Program.

Music major Nic Catalan ’22, who is the recipient of the Gwen Livingston Pokora Prize, was honored for writing a series of solo electric bass pieces alongside three compositions for electric bass, piano, drums, and tenor saxophone. Established in 1993, the Pokora Prize is awarded annually to an outstanding undergraduate student in music composition.

“My solo works were inspired by cellist Abdul Wadud’s solo recording ‘By Myself,’ and my quartet pieces aimed to link my unaccompanied language with ensemble-based new and improvised music,” Catalan said.

Established in memory of Christopher Brodigan, a Wesleyan student who died in an accident in his first year, the Christopher Brodigan Award pays tribute to his deep interest in Africa and to the public service he provided through teaching in Botswana prior to entering Wesleyan. This year’s recipient is Alice Musabe ’22, who is working to help women overcome menstruation biases and barriers in remote areas of Rwanda by offering Sexual Health and Reproduction Education and promoting the use of menstrual cups and reusable pads.

“I am so excited and grateful for the mentorships and partnerships that will make this project possible,” Musabe said. “I am honored to give back to my fellow sisters in Rwanda and to lay my effort in ending period poverty and destigmatizing menstruation.”

Dustin Morris ’22 received the Frank Capra Prize for his “outstanding senior film”; Charissa Lee ’23 and Robyn Min Xuan Wong ’23 were honored with the Peter Morgenstern-Clarren Social Justice Award for social justice work; David Koestler ’25 won the Ayres Prize for the highest academic standing in the first semester; and Mosab Hamid ’23 received both the Shu Tokita Prize, awarded to a student of color majoring in literature and area studies; and the Wesleyan Black Alumni Council Memorial Prize for “community service related to concerns of black people.”