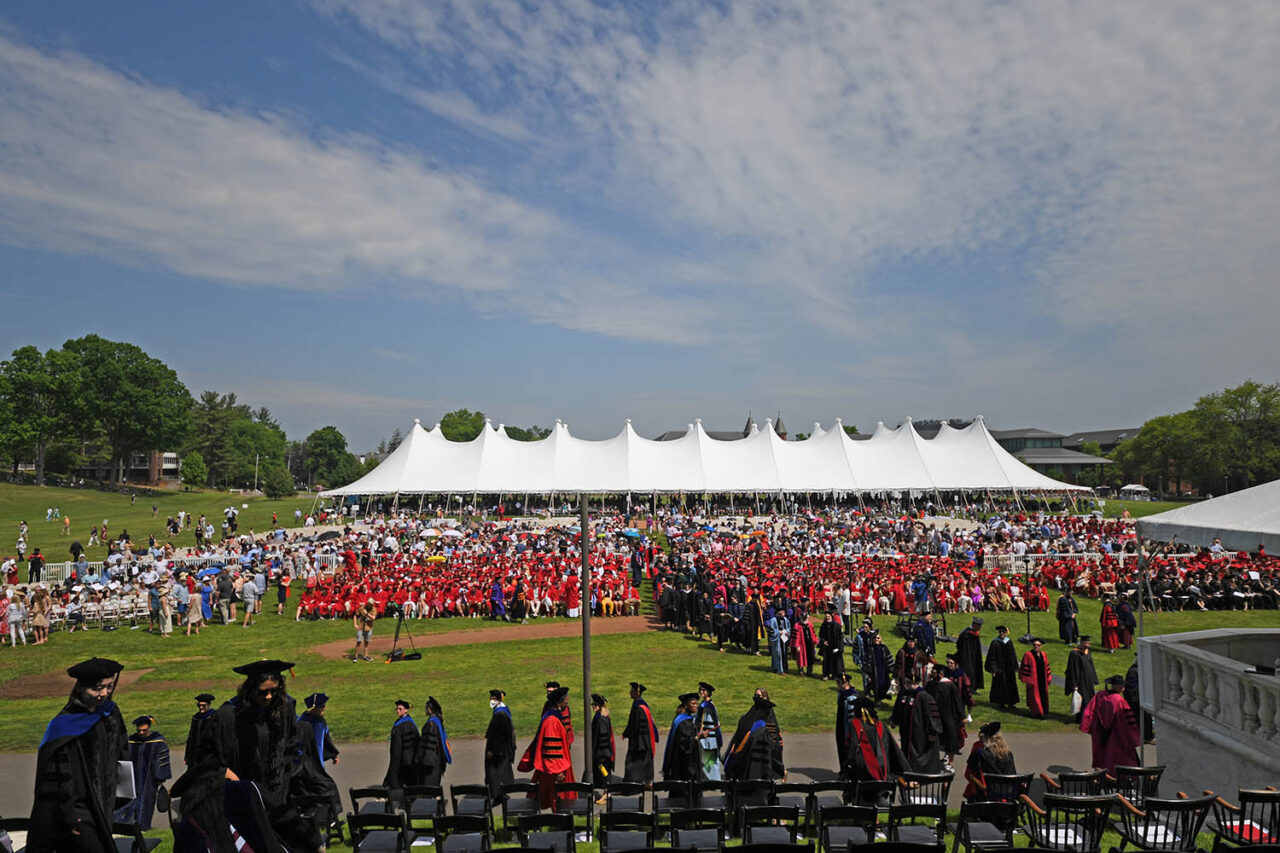 After 36 years teaching chemistry at Wesleyan and becoming an internationally-recognized expert on photoelectron spectroscopy, Joseph Knee, Beach Professor of Chemistry, is ready to retire.

Joe Knee dedicated his career to developing time-resolved laser spectroscopy techniques that help determine the structure and dynamics of gas-phase molecules, molecular clusters, and ions. These methods provide insight into molecular behavior and influence the strength and structure of intermolecular hydrogen bonding.

While an undergraduate at Binghamton University, Knee began research on electronic spectroscopy with well-known spectroscopist Keith Innes, and as a graduate student at Stony Brook University, he worked on pioneering studies in the rapidly-developing field of multiphoton ionization spectroscopy.

At Wesleyan, Knee has taught numerous courses including Quantum Chemistry, Thermodynamics, Spectroscopy, and Introductory Chemistry. With his graduate and undergraduate research students, Professor Knee has published over 70 publications and received numerous grant awards.

“I also had the pleasure of working closely with many talented undergraduates in research tutorials in my laboratory,” Knee said. “Of all the varied activities at Wesleyan, it was hands-on work in the lab—designing, building, and performing experiments with my group—that was my biggest passion.”

During his time at Wesleyan, Professor Knee made significant contributions in service to his Department, Division, and the University. He served as Chair of Chemistry; director of Graduate Studies; chair of the Faculty Committee on Rights and Responsibilities; and served four terms on the Advisory committee including vice-chair in 2014, and most recently Dean of Natural Sciences and Mathematics from 2015 to 2020. As Dean, Knee was the faculty leader on the planning effort for the new chemistry and life sciences building currently under development.

Outside of Wesleyan Professor Knee has numerous interests and activities. Most notable in recent years has been his membership on the board of MARC Community resources which is a non-profit organization in Middletown serving people with intellectual and developmental disabilities in numerous capacities. He has been chair of the board for the last two years. In retirement, he plans to spend more time with his growing family, playing golf, biking, and traveling.

Ann Campbell Burke, professor of biology, emerita, spent 23 years at Wesleyan studying and teaching classes on the morphological evolution of the musculoskeletal system in vertebrates and the role of developmental processes in that evolution. She has used both classical experimental embryology and modern molecular methods to explore developmental mechanisms that result in morphological novelties.

Burke earned degrees from New York University and Harvard University and worked as an assistant professor of biology at the University of North Carolina, Chapel Hill before coming to Wesleyan in 1999.

Professor Burke has served as a member of the professional societies PanAmerican Society for Evolutionary Developmental Biology, Euro-Evo-Devo, Society of Integrative and Comparative Biology and the International Congress of Vertebrate Morphology. She’s organized several symposiums on topics such as “The Biological Challenges of Morphogenesis,” “What should Bioinformatics do for EvoDevo,” “Developmental Perspectives on the Evolution of the Musculoskeletal System,” and “EvoDevo: Exploring mechanisms of Macroevolution.”

She’s the author or co-author of more than 40 publications, including “Shifting the black box:  Approaches to the Development and Evolution of the Vertebrate Mesoderm,” which was published in Evolutionary Developmental Biology—A Reference Guide in 2020 and “Body wall development in lamprey and a new perspective on the origin of vertebrate paired fins,” in PNAS in 2013.

“I will miss the fantastic students I have had the pleasure to know,” she said. “I will miss the occasional NSM lunch, the Gamelan, the Taiko drumming, and most of all singing for the seniors with the RoadSideGirls!”

Ronald Schatz, professor of history, emeritus, joined the Wesleyan faculty in 1979 after earning  a bachelor’s degree at the University of Wisconsin and a Ph.D. from the University of Pittsburgh. During his career at Wesleyan he taught courses in U.S. history and also at various times served as a tutor in the College of Social Studies.

From the time of his first book The Electrical Workers: A History of Labor at General Electric and Westinghouse, 1923-60, he has been a recognized pioneer in the careful use of extended oral interviews in writing working-class history and has published widely in the field. In addition to twentieth-century labor, Schatz’s primary teaching and research interests are the conservative movement, labor and religion, and American Jewish history. While advising student research in his seminar on Middletown history, Schatz wrote the essay “The Barons of Middletown and the Decline of the Northeastern Anglo-Protestant Elite,” which was published in the international journal Past & Present. Reflecting on his career, he said, “I was lucky to work with such fine, enthusiastic students. I will miss them.”

Ron Schatz’s newest book, The Labor Board Crew: Remaking Worker-Employer Relations from Pearl Harbor to the Reagan Era (University of Illinois Press, 2021), tells the story of a team of young economists and lawyers who were recruited to resolve union-management conflicts during the Second World War and went on to exert broad influence in social and industrial arenas for the next half-century.

As he begins retirement, Schatz has started research for a book about the musicians’ union and its powerful and colorful former leader, Jimmy Petrillo.

“I was lucky to work with such fine, enthusiastic students,” Schatz said. “I will miss them.”

Anne Greene, University Professor of English, emerita, is retiring after a 47-year-stint at Wesleyan. She started teaching in 1975 after obtaining degrees in English from Harvard College, Brandeis University, and Princeton University.

Greene was promoted to University Professor of English in 2016. She served as director of Writing Programs from 1991-2016 and director of the Shapiro Creative Writing Center from 2011-12. Green was best known for her work serving in director capacities of the Wesleyan Writers Conference since 1983 and as coordinator of Wesleyan’s Writing Certificate program since 2009.

She received a Binswanger Prize for Excellence in Teaching in 2007.

Burke, Greene, Knee, and Schatz also were honored at a reception honoring retiring faculty on May 21 at the Susan B. and William K. Wasch Center for Retired Faculty.

Due to the COVID-19 pandemic, faculty who retired in 2020 and 2021 were welcomed back to campus for a Retiring Faculty Reception at the Susan B. and William K. Wasch Center for Retired Faculty on May 21.