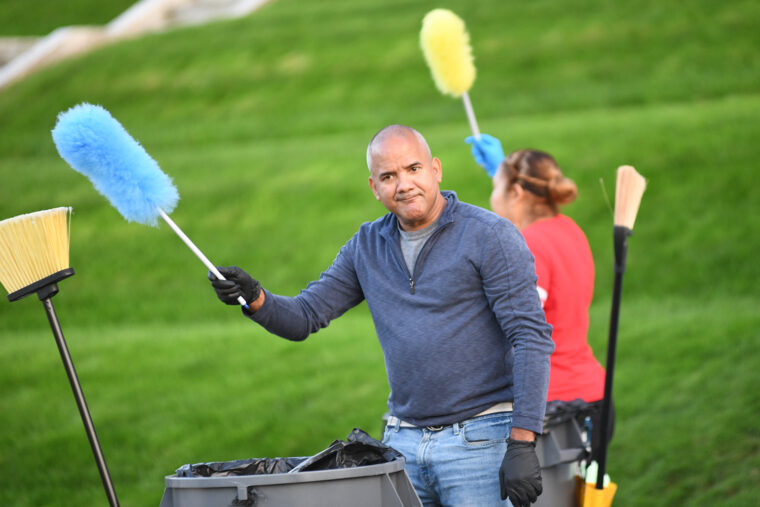 Last fall, while working as the lead production assistant for WesWorks, a performance featuring Wesleyan facilities staff, Erin Byrne ’24 became acquainted with Victor Ignacio Rosario— a custodian at Wesleyan who is contracted through SMG. Rosario, who primarily works in Exley Science Center and the Science Library, allowed Byrne to job-shadow him and in return, Byrne gained a deep appreciation for his day-to-day responsibilities.

“Victor is a vital and enthusiastic member of the Wesleyan community,” Byrne said. “Especially during the pandemic, keeping communal spaces on campus clean constantly was difficult and necessary, and Victor helped me realize just how much work goes into [the job].”

This May, Rosario won the Peter Morgenstern-Clarren Award, along with Nicola “Nick” David, a foreperson and material handler for Physical Plant-Facilities. Like Rosaio, David was nominated for providing exceptional service and a passion for his work.

“[Nick] is a customer-oriented individual who is always ready to help the students and staff upon request and does not require his customers to be put on a waiting list if he is able to make small sacrifices to make it happen,” wrote Evelyn Bozeman, administrative assistant for the Office for Equity & Inclusion in her nomination letter. “Throughout the years, he has been a great help during commencement as well as any time during the academic year. Often times his efforts are not highlighted because he provides great service because he enjoys what he does.”

April Ruiz, dean for academic equity, inclusion, and success, noted that many members of the Morgenstern-Clarren awards committee were familiar with David’s efforts on campus. “They had a lot to say about his absolute dedication to students, which really filled in the committee’s picture of him,” Ruiz said.

In addition to the staff awards, sophomores and juniors are welcome to apply for a Peter Morgenstern-Clarren ‘03 Social Justice Award by writing an essay. This year, Charissa Lee ’23 and Robyn Wong Min Xuan ’23 won the award for exemplifying Wesleyan’s rich tradition of civic engagement and social justice.

Lee, an intern at the Support, Healing, Activism, and Prevention Education (SHAPE) Office, works to support and lead changes that will contribute to Wesleyan students being sexually. Recently, she’s concentrated her efforts on creating a book club that brings up difficult conversations about consent and alcohol, race and class privilege, body count and social clout, access to privacy and power, uneven effects of cancel culture, and the impacts of mainstream pornography.

“Although the impact of these conversations may not be tangible in the short-run, I believe that these discussions will shift mindsets in the long-run, and hopefully empower participants to engage in their relationships with care and respect,” she said.

Lee also assists with SHAPE’s annual flagship event, Survivor Solidarity Month, which is designed to educate the larger Wesleyan community about what a responsible and caring community looks like, while centering the needs of survivors throughout the month.

“Overall, I have used my intersectional knowledge, strategic thinking, leadership, and communication skills to diagnose the roots of injustices and customize advocacy solutions to suit different contexts,” Xuan said. “And my work is not done. On one hand, coming from a country where advocacy and free speech are curbed, I see my ability to learn about and practice advocacy in the U.S. as an immense privilege and responsibility.”

Rachel Munafo, director of operations at the Gordon Career Center, also nominated Xuan for the award. “In addition to her academic excellence, Robyn’s active pursuits to effect positive change in our University’s community are deliberate and impactful,” she said. “Robyn truly embodies Peter Morgenstern-Clarren’s spirit and legacy and her leadership efforts are most deserving of the recognition offered through this prize.”

previousAlumni Honored for Outstanding Service, Achievement in Their Professions