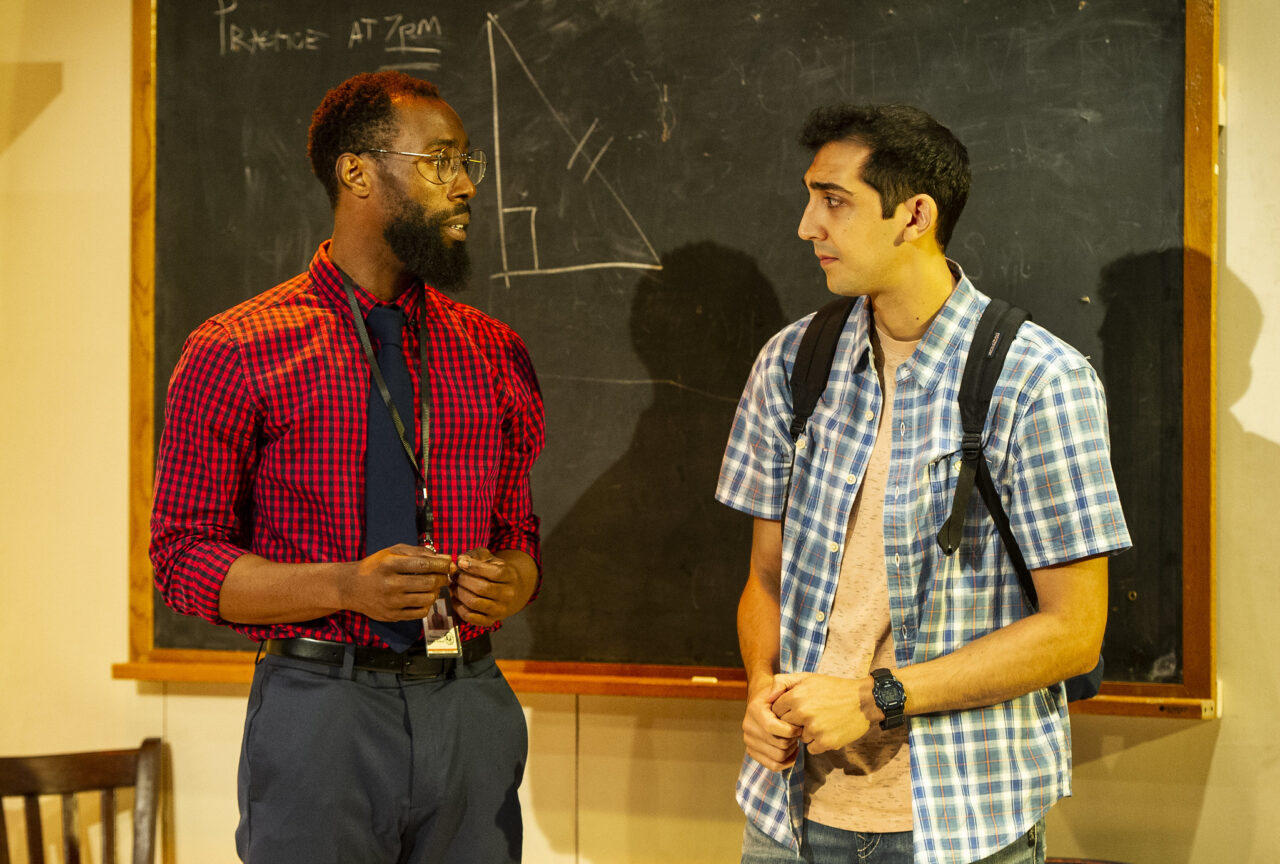 The kernel for “ABCD,” the first professionally produced play written by playwright, director, and dramaturg May Treuhaft-Ali ’17, started as a 10-page class assignment the spring of her senior year at Wesleyan.

“ABCD,” which premiered at the Barrington Stage Company in Pittsfield, Massachusetts, this summer, began as part of her coursework at Wesleyan with Pulitzer Prize–winning playwright Quiara Alegría Hudes (“In the Heights”) that focused on writing historical plays. The crosslisted Theater and English course “Writing History” was an intermediate-level playwriting workshop. Treuhaft-Ali examined plays that used different dramaturgical strategies to grapple with, question, and invigorate the historical record; and then wrote original plays that sprang from, reacted to, and grappled with the past as it’s been told and hidden from telling.

Treuhaft-Ali read about the Atlanta public schools cheating scandal while taking the course. Teachers and principals had been accused of cheating on state-administered standardized tests in 2009, and were tried on racketeering charges in 2014–2015. Only one of thirteen teachers was found not guilty. “I was just devastated for the teachers, and grieving with them,” said Treuhaft-Ali.

After graduating from Wesleyan, she moved to Chicago for a literary apprenticeship at Steppenwolf Theatre Company. While in Chicago, she was inspired to revisit “ABCD” after joining her sister Layla, a local middle school teacher, in the classroom and at events run by Teachers for Social Justice.

After struggling with the play’s first draft, Treuhaft-Ali found support through a nine-month fellowship at The Playwrights Realm in New York during the COVID-19 pandemic. She undertook extensive rewrites of each scene, a reordering of the play’s structure, and the deleting of a character. “Having the time to be in workshop with the play and have that intensive experience was so transformative,” she said. “Being around people and being around actors in particular makes me rewrite.”

That’s when the Barrington Stage Company entered the picture. A staff member from the Massachusetts-based theater company attended a Zoom reading of “ABCD” and called Treuhaft-Ali to express interest in producing the work. “That’s a pretty crazy thing to happen,” she said.

A four-week rehearsal process with director Daniel J. Bryant earlier this summer allowed Treuhaft-Ali to be close to the actors’ process and continue rewriting the piece. “To get to see other artists take ownership of it, having actors say ‘Hey, the character just snapped into focus in a different way for me,’ and tell me what they learned about this character, who is now so much bigger than me, is the coolest feeling in the world,” said Treuhaft-Ali.

Treuhaft-Ali’s interest in becoming a playwright began in earnest with a successful submission to a student-written play festival, leading her to consider majoring in Theater when it came time for college. When she came for the WesFest admitted students weekend in 2013, she saw Sarah Ruhl’s “Eurydice” directed by Sivan Battat ’15 and Gabe Gordon ’15 in the Patricelli ’92 Theater. “Sivan is a few years older than me and I just adored that play and that production. I thought ‘Oh, this is a place you go if you want to be an artist and work in the arts.’ I do think that college, and Wesleyan in particular, is the time and the place to make the weird art and to do the experimental thing and take big risks,” said Treuhaft-Ali. The seeds sewn in her senior year coursework ultimately led to her professional debut five years later.

She has worked for nearly three years as a literary and community engagement assistant at Playwrights Horizons in New York, which receives 1,000 new plays and works in progress each year. “It makes me excited to be part of the generation of writers I’m in, and it also shows you the abundance of material out there…Being an artist and serving other artists go hand in hand.”

Treuhaft-Ali is now a 2022–2023 Van Lier New Voices Fellow at Rattlestick Theater, where she will be mentored by playwright José Rivera. “This is kind of a dream come true,” she said. “I have complete full first drafts that I want to turn into second drafts, some of them I am just starting out on. I’ve got a lot of writing to do. It’s going to be a busy year of me sitting by myself and talking to characters in my head.”

nextWesleyan in the News, August 2022