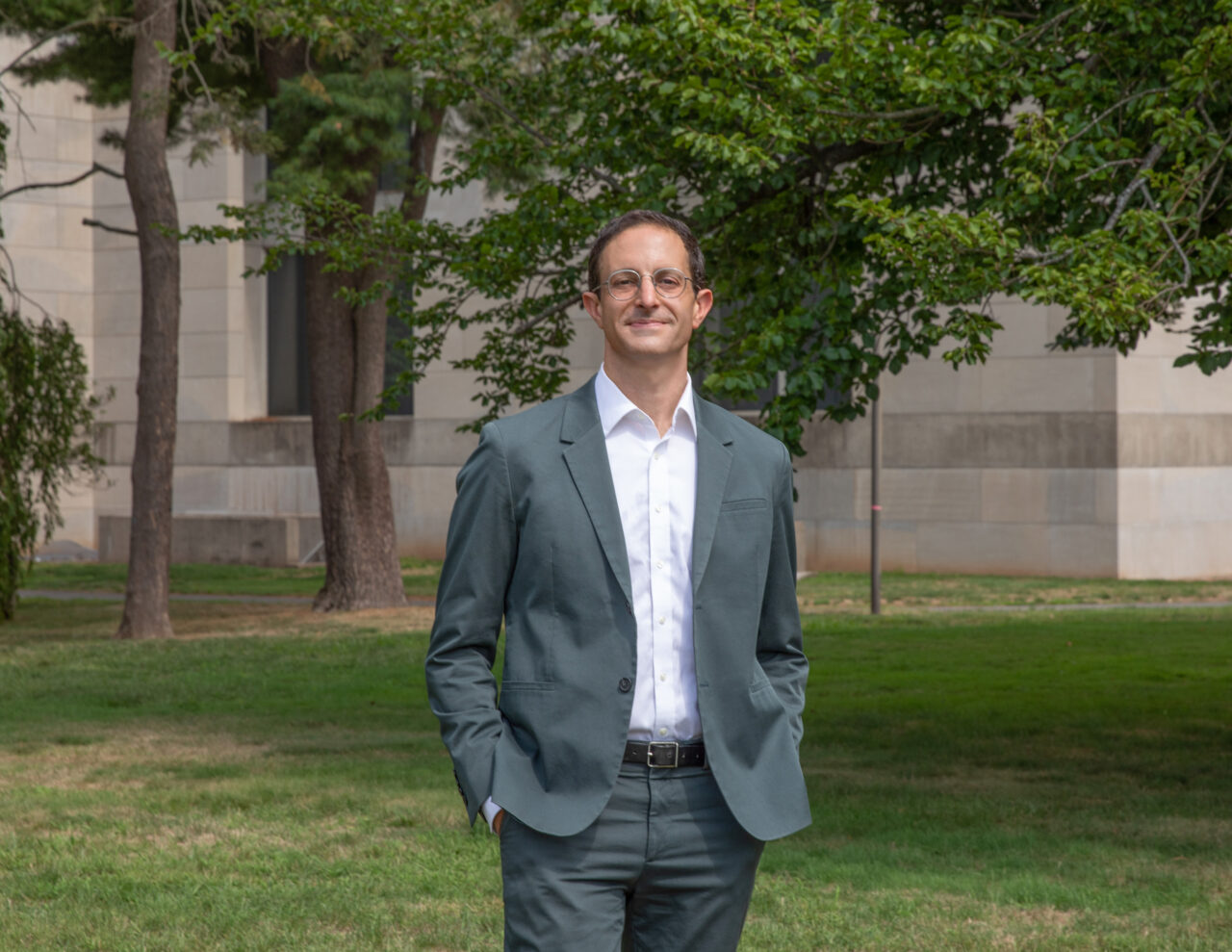 When Joshua Lubin-Levy ’06 was studying at Wesleyan, his friend made him go to a screening of the Talking Heads concert film “Stop Making Sense” in what is now the Ring Family Performing Arts Hall. Everyone ended up dancing in the cinema. “That was an amazing experience,” he said.

Lubin-Levy remembered that moment as he looked out on that venue from his new office as the Director of the Center for the Arts (CFA). “The way I approach this work, the heart of all of this, is building relationships with artists and with the community at Wesleyan that supports artists being here,” said Lubin-Levy, who spent the past six years focused on engagement work at the Whitney Museum of American Art as the Senior Joan Tisch Teaching Fellow.

After an extensive search, Lubin-Levy started on August 22.

Nicole Stanton, Provost and Senior Vice President for Academic Affairs, and Professor of Dance, Environmental Studies, and African American Studies, said the search committee that selected Lubin-Levy “was impressed not only by his rare combination of performing and visual arts knowledge but also with his clear commitment to collaboration and team building. It became clear that he could serve as an advocate for the arts across campus, as a scholarly and creative practice, and within the community of Middletown.”

Lubin-Levy’s goal is for the Center for the Arts to be more than “decoration for the University,” elevating what art does beyond illustrating ideas. “We are not just putting art up on walls. We are not just bringing in performers to entertain us,” he said. “Artists are our collaborators, they’re our colleagues…We need to ask ourselves what the culture of artistic research is on campus. What does it really mean to think about art as a modality of research, a kind of hub of research, in the way that we do about the sciences, or in social sciences, or the humanities?”

He’s looking to rewrite the terms on which the CFA engages with artists, helping to host them within the framework of ongoing Wesleyan programs such as the Creative Campus and Embodying Antiracism initiatives, honoring their needs, and giving them “access to the hive mind of the University” across disciplines. “It creates capaciousness around the way the work we’re doing can interact with each other…I want to go to artists and say, ‘What would you want to do if you had access to all the resources of the CFA?’” he said.

While wanting to prioritize under-represented and under-resourced artists, he also spoke about being very intentional about the output of those collaborations with artists, supporting their work with students to produce things, even at a small scale – from ’zines to podcasts.

Citing the example of a performance and workshop by his Movement Research Performance Journal colleague mayfield brooks, “Improvising While Black,” Lubin-Levy said “that’s where the sparks start flying—how thinking and practicing start to generate together…This is the way that we not only make knowledge, but share it with each other.”

Lubin-Levy grew up outside of Boston, where he acted in theater throughout high school. As a prospective undergraduate, he was drawn to Wesleyan’s open curriculum—an approach that helped him learn how to challenge himself. “I fell totally in love with theater,” said Lubin-Levy about acting in productions on campus, whose experimental focus helped him realize that the arts were a vehicle for activating what he was learning as a double major in Theater and American Studies.

He explored how art could be an equal partner in reimagining and transforming the world. “One way to respond to it was to get involved in politics, another was to do the research and write about it, and the other was to translate that research and those politics into an aesthetic practice,” said Lubin-Levy.

After graduating from Wesleyan, Lubin-Levy went on to get his M.A. and Ph.D. in Performance Studies at N.Y.U. While working as a dramaturg in New York, Lubin-Levy met Sam Miller ’75 through the Lower Manhattan Cultural Council. They talked about creating deep models for thinking about the arts as a partner in building and creating social infrastructure.

Lubin-Levy is excited to help realize the promise of both the CFA as it approaches it’s 50th anniversary in the fall of 2023, as well as the promise of a liberal arts education for current students.

“We’re held to this question of, ‘Can we live up to these really big ideals?’ And that’s exciting work to be struggling towards,” said Lubin-Levy. “Making sure that we think about the CFA as a global center while not ignoring the culture and art of the local community…thinking expansively about inclusion and diversity in the arts that’s presented here, but also diversity, equity, and inclusion in the way that what gets thought about and made at Wesleyan reaches way beyond our campus.”

previous“Ecstasy and a sense of unity:” The Class of 2026 Experiences the Common Moment