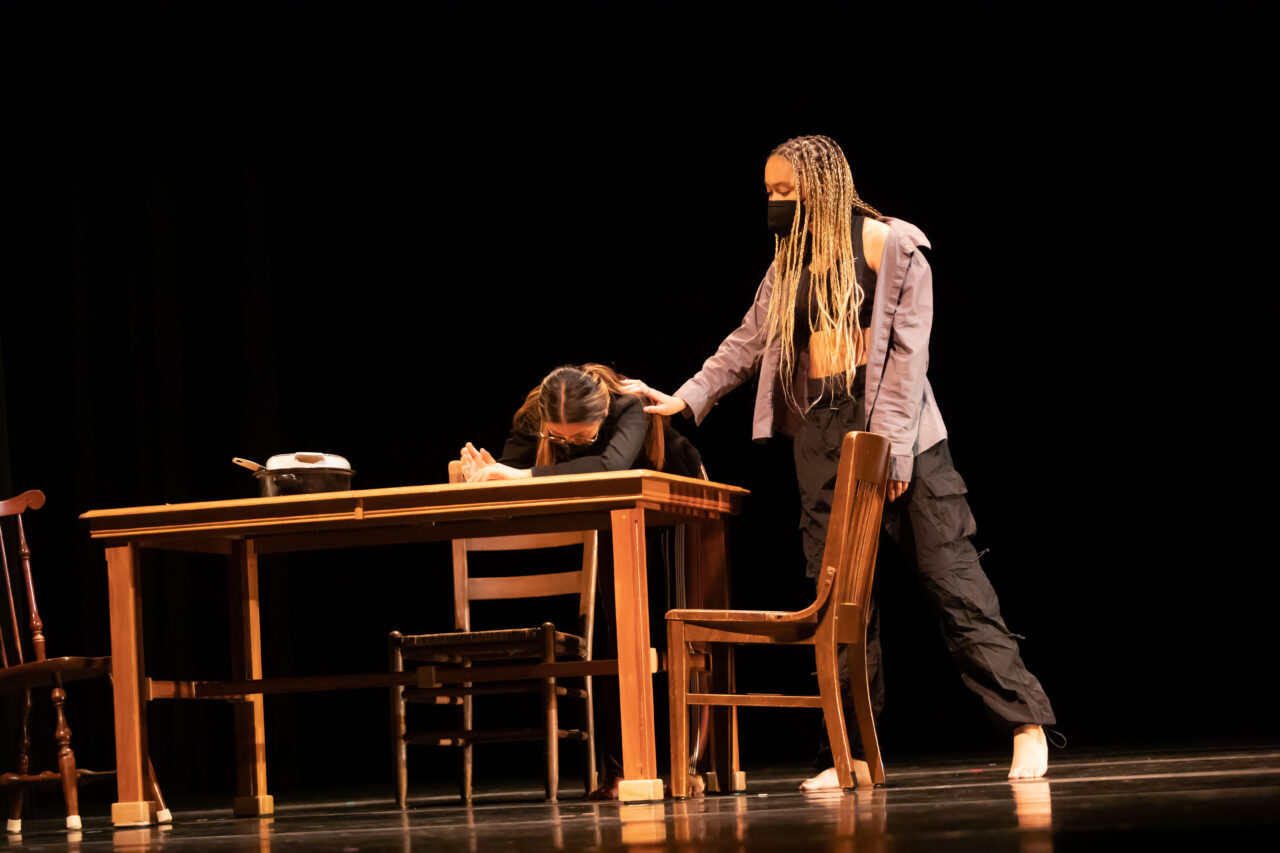 Wesleyan students across different class years presented new group works focusing on a diversity of techniques, methods, and aesthetic approaches in the Winter Dance Concert “11 Short Stories” on December 9 and 10 in the Center for the Arts Theater.

Dance makers from the class DANC 250 “Dance Composition: Choreography Workshop,” taught by Assistant Professor of the Practice in Dance Joya Powell, focused this past fall on the process of making a dance in a theatrical setting.

Similar to a collection of short stories by different authors, the resulting works, featuring between two and four performers each, were personal and passionate, with many pieces about overcoming challenges and emotions in a healthy way.

“We give meaning to the movement and open it up to the audience for interpretation, which is a scary and vulnerable moment that we have to be willing to accept,” said Danae Williams ’25, one of 11 choreographers who presented work at the concert.

The 90-minute evening began with the stage set up with overturned chairs and tables. “Calamity” depicted the experience of Bailee Gull ’24, whose community was devastated by Hurricane Ian earlier this fall. Gull projected news footage of the storm at the start of the piece. The work concluded with the four dancers righting the turned-over tables and chairs and sitting down as a calm sea was projected behind them. “After seeing the destruction and pain it caused, I changed the theme of my piece to reflect what happened, what is currently still happening, and what the people of southwest Florida are going through months after [Hurricane Ian] hit,” Gull said.

“An Unsettling Tuesday” by Gabriella Wilkerson ’24, explored themes of dissonance between the simultaneous joy, sadness, and fear of living in an imperfect world. Throughout most of the work, one of the four dancers portrayed a depressed mood, sulking with folded arms, or pushing herself across the floor with her legs while lying on her back, while the other three dancers moved elatedly. By the end of the piece, all four dancers seemed to be thriving. “In class, we discussed giving an audience credit for their intelligence, leaving space for them to figure out what a piece means,” Wilkerson said.

The audience cheered as the two dancers in “Do I Have Your Attention?” by Mika Foguel ’25, broke into a tightly choreographed segment set to hip hop by Big Sean. The performance began with the dancers, each circled by blue cones, lying down on the stage and answering messages on their cell phones. The dancers then emerged from their cone circles to dance together. “My story is about finding passion and getting out of a ‘boring’ world,” Foguel said.

“(Mind)Set” by Adam Cyzner ’25, followed a person struggling with self-doubt, and learning to embrace those feelings. “Another possible interpretation could be a struggle with nihilism,” said Cyzner.  The work included dramatic red lighting and utilized sub-bass and static in the sound design. It concluded with three dancers in a shaft of light reaching out to show another dancer the way as calm piano music played.

Set to R&B by Erykah Badu, “If I Eat, We All Eat” by Danae Williams ’25, began with three dancers serving food on a table, and missing various phone calls. She said her story was about three generations of her family struggling with love, loss, traditions, and responsibilities. The work was dedicated to her grandmother, who passed away in October. A photo of Williams’ grandparents was projected on stage near the end of the piece. “It is also about my personal journey as a queer Black woman breaking barriers and generational curses that have kept my family in the dark for years,” said Williams, who is the first generation of her family to go to college.

The evening concluded with “We Move” by Stephanie Aka ’24, whose work focused on the joy of dance and movement. Her three dancers drew cheers from the crowd as they danced with pom-poms to hip hop and marching band music in front of a projection of the Wesleyan Cardinal. “I was thinking back to my time as a dancer on my high school drill team,” Aka said.

Although all the student choreographers conceived their ideas separately, when viewed together in a single concert, each of their works seemed to end with the dancers finding a moment of peace and healing. “Some of the best art can come out of pain,” Gull said.

previousWesleyan in the News: December 2022