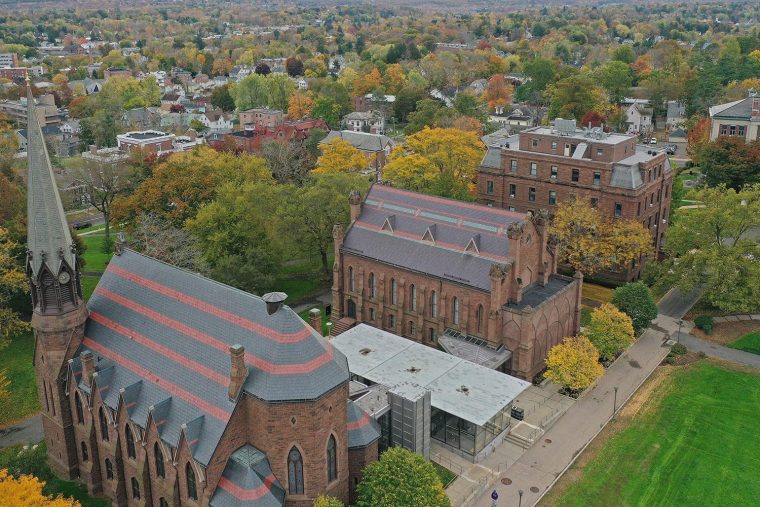 Bozoma Saint John ’99’s new memoir “The Urgent Life” has been named one of Oprah Daily’s most anticipated books of 2023.

“Marketing maven Saint John has experienced tragedies and triumph: From the death by suicide of her college boyfriend to her husband’s terminal cancer, Saint John gathers the strength to continue life with their daughter,” according to Oprah Daily. Saint John is a member of Wesleyan’s Board of Trustees.

Wesleyan University was featured in a New York Times article about the possible ramifications if the Supreme Court overturns affirmative action in college admissions.

Ellen Thomas, Harold T Stearns Professor of Integrative Sciences, Emerita, who along with her colleague James Zachos, received the Frontiers of Knowledge award from the BBVA Foundation. The award recognized Thomas’s pathbreaking work “identifying a ‘greenhouse effect’ 56 million years ago that serves to predict the destructive impacts of today’s human-induced global warming.” Through an analysis of sediment samples Thomas showed how a mass extinction event occurred at a period of global warming between the Paleocene and Eocene eras. That discovery informs our climate models today.

In the Artificial Intelligence & Equality podcast, Weill Cornell’s Dr. Joseph Fins ’82, Hon. ’22 discusses with Senior Fellow Wendell Wallach the hype and realities surrounding contemporary neuroscience and neuroethics. He shares insights from his own seminal research on patients who may be mistakenly presumed to be in a vegetative state when they are actually in a minimally conscious state.

The Middletown Press covers Wesleyan University’s Ezra and Cecile Zilkha Gallery upcoming exhibits created by Assistant Professor of Art Ilana Harris-Babou and Carrie Yamaoka ’79. “Liquid Gold” opens Jan. 30 at 4:30 p.m. at the Zilkha’s North Gallery, 283 Washington Terrace. This artwork is the first chapter in a series of installations by Harris-Babou. The opening reception for Yamaoka’s exhibit “seeing is forgetting and remembering and forgetting again,” will take place on the same date and time at the Zilkha’s Main Gallery.

Alex Dupuy, Professor of Sociology, spoke to the Associated Press about the democratic crisis in Haiti. “It’s a very grim situation,” Dupuy said, “one of the worst crises that Haiti has had since the Duvalier dictatorship.”

April M. Hickman, Assistant Professor in the Practice of Costume Design, will be designing costumes for Signature Theatre’s production of Samuel D. Hunter’s “A Bright New Boise,” according to Broadwayworld.

Joseph Slaughter, Assistant Professor of the Practice in Religion and History and Associate Director of the Center for the Study of Guns and Society, describes his new course “God and Guns: the History of Faith and Firearms in America” in an op-ed for The Conversation.

The New York Times writes about the work of Kennedy Odede ’12 and Jessica Posner ’09 in Kenya with Shining Hope for Communities, better known as SHOFCO.

Merve Emre, Shapiro-Silverberg Distinguished Writer in Residence, wrote in the New Yorker about how academia changed literary criticism. “The professoriat has struggled to demonstrate a connection between the skills cultivated in literature classrooms and those required by the professional-managerial jobs that many students are destined for,” Emre wrote.

Balazs Zelity, assistant professor of economics, predicts in a recent Patch article that electricity rate increases in Connecticut will cut into household budgets and will make businesses less competitive.

The Manchester, CT. High School pool was named after U.S. District Court Judge Dominic J. Squatrito ‘61, a former local diving champion who died at age 82 in 2021, according to the Journal-Inquirer.

Miho Mazereeuw ‘96, an architect of built and natural environments, looks for new ways to get people ready for natural disasters, according to MIT News.

Media personality and entrepreneur Angela Yee ’97 is launching her own syndicated radio show, Way Up with Angela Yee, in partnership with iHeart Media, according to BlackEnterprise.com.

Forum Gallery presents Professor of Art Tula Telfair’s latest exhibition “From a Distance,” the eighth solo exhibition for the Artist at the gallery. The exhibition takes place from January 19 to March 4, 2023. For this exhibition, Telfair has created twenty-four oil on panel paintings in an intimate scale, a departure for Telfair, who is best known for her grand-scale, heroic landscapes, according to Artdaily.

Andrew Curran, the William Armstrong Professor of the Humanities, and Henry Louis Gates Jr.’s recent book, Who’s Black and Why? A Hidden Chapter from the Eighteenth-Century Invention of Race (Harvard University Press), has been nominated for a 2023 NAACP Image Award in the category of Outstanding Non-Fiction Literary Work.

Steven Stemler, Professor of Psychology, recently led a study that showed a newly enacted initiative in Connecticut school districts made a significant difference in reducing student absenteeism, particularly with secondary school students, according to Future Ed.

Dr. Stephen Berman ‘68, one of the Colorado’s most prominent physicians, passed away from lymphoma on January 17, according to Colorado Public Radio. He was 76. Berman was a previous president of the American Academy of Pediatrics and held an endowed chair in academic general pediatrics at Children’s Hospital Colorado. Berman was a longtime professor of both the CU School of Medicine and the Colorado School of Public Health.

Professor of Government Peter Rutland published a piece in Responsible Statecraft entitled “Why Putin’s attacks on Ukrainian infrastructure could backfire.” If history is any indication, Russia’s campaign of strikes on power stations is unlikely to yield a strategic advantage, Rutland writes.

Coltsville National Historical Park teamed up with the newly established Wesleyan University Center for the Study of Guns and Society (CSGS). In October, staff, from Coltsville National Historical Park and Springfield Armory National Historic Site, participated in the inaugural conference, Current Perspectives on the History of Guns and Society, including speaking on a panel focused on museums and firearms. Wesleyan University students who are researching the manufacture, culture, and legal questions around firearms, toured both Coltsville and Springfield Armory. Intern Sophie Mann-Shafir focused on the political, legislative, and socio-racial events spanning the invention and patenting of Colt firearms developing a timeline of legislation and the manufacturing of firearms.

White Rabbit acquired world English language rights for “I Thought I Heard You Speak: Women at Factory Records” from author Audrey Golden ‘06, according to The Bookseller. The book is a new history of Factory Records from the perspective of the women who made it a success. Golden is a writer based in New York with a focus on music, culture, cinema and politics.